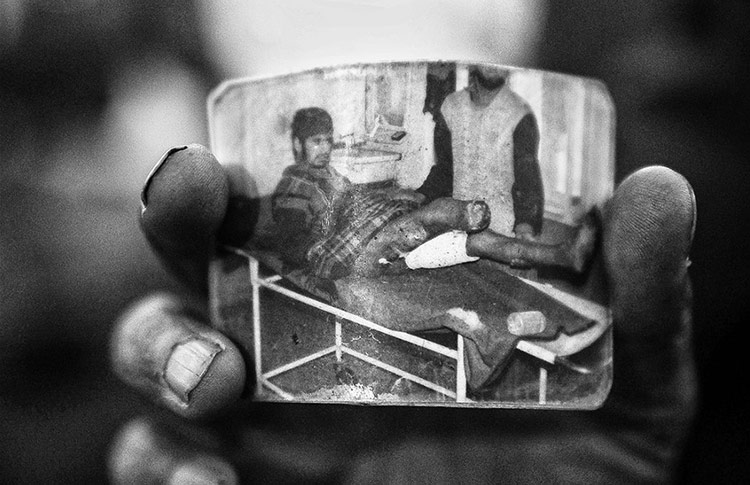 “He likes quite a lot of them. Especially from the ones I took in Kashmir, filed under my project, ‘No Mans Land’,” replied Avani when I asked about her photographs that her father likes the most.

But why did our conversation start on this note? Because it was after watching the trailer of the documentary ‘Raghu Rai, An Unframed Portrait‘ that I called Avani, touched and intrigued by her beautiful tribute to her father, whom the nation knows as the “father of photography”.

Reading about the two ace photographers, I gathered that the father-daughter duo shares a rather unique relationship that can get as tense as easy. In one of the recent interviews Avani talked about how certain tensions existed even when they were shooting, “he’d behave in a particular way, and you couldn’t take that away from the character. My opinion is different from his, and I won’t take the shots he’d want me to take.” But what was his reaction after watching the film? “I must say, she has done a wholesome job,” said the 76-year-old veteran. According to Avani, “the ‘wholesome’ was a weightier adjective that any other form of praise.”

Currently the 27-year-old mass media graduate is working as a professional photographer in Mumbai, and below are the excerpts of my conversation with her, wherein she talks about how her impromptu visit to the International border led her to putting together ‘No Mans Land’, the situation of distress in Kashmir, her takeaway from shooting in Muslim countries, and last but not the least, photography!

Let’s begin with talking about the memory of your first photograph by your father.

I don’t know which was the first photo he took of me; he began to shoot me from the time I was born. Which then continued to my teenage years, to college, basically until I had to ask him to stop, she laughed.

Oh, haha. Which photograph of yours does he like the most?

Umm, he likes quite a lot of them. Especially from the ones I took in Kashmir, filed under my ‘No Mans Land’ Project.

‘No Mans Land’ [Gates that open to no man’s land and shut every day at 5 pm.]
The mention of it brings me to my next question; how did you plan the ‘No Mans Land’ project, and how did it come about?

There was no planning involved, one of my friends who writes for The Indian Express was going to the border, and I accompanied her. Due to the constant cross-border shelling, the village that was inside the No Man’s Land was evacuated and shifted to the Uri town of J&K, and people were being taken to the rehabilitation centre – the government school of Uri.

There is this big gate that marks the beginning of the Indian territory of No Man’s Land – when we walked into it, there was one army man there sitting on a bunker, and who was also just about to leave. Shelling had happened that morning itself, and he kept telling us, “Madam, please go back. If anything happens to you all, I will not be able to do anything.”

The situation must be terrible for the villagers?

The time I was there, one of their biggest concerns was to shift the big oil garrisons from the village, because if busted by the shelling, nothing would be left. The villagers have gotten so used to the situation that it doesn’t scare them now; they’ve grown immune to violence. Though it goes without saying that their lives are at risk by all means, and at the end of the day, all they care about is survival.

‘No Mans Land’ [Women and children at the relief camp.]
In the description text of ‘No Mans Land’ on your website, I read this one statement of an elderly woman, “they (politicians) only come here for votes and disappear to Delhi never to be seen again, sitting on their ‘kursi’”.

People in those villages have never believed in politics, but while it is one thing to not be involved, if the consequences have a strong negative impact on their lives, they are bound to develop hatred, and that is what she was referring to.

There must be cases of rape and abuse; did they talk about it?

Of course, there are cases of abuse and rape. Kids are abducted by the army and tortured; young men and boys get picked up and never return. And it all adds to the suffering of women in a way that one cannot even imagine. What they have to deal with on an emotional level is frustrating and beyond any physical pain or abuse. And they live with it unable to do anything about it.

How is the situation w.r.t. the daily life, education, and social nuances?

There fall two villages in that zone, one at a distance of 8 km from the district capital and another at 5 km, and 2-4 villages in the area between the international border and no man’s land, as you go up from the Turtuk and Nubra Valley. There are times when villages wake up to division, and the situation is such that they can’t be indifferent to it, and so have gotten quite used to of the evacuation and shifting. Except for the recent troubles, they are quite satisfied in their normal life – local shops and businesses earn them livelihood, children go to school…

And how about girls and young women, there must be no safety net?

The time I reached there, some 50 girls had just been shifted to one room in the school. Cases of exploitation must be there, but it is sad that there is no accountability due to conflict. They don’t even talk about it – their basic instinct is only about survival.

Hmmm. There is certainly a lot that needs to be dealt with on this front. As someone who has witnessed their situation so closely, what do you think should be done?

We need to look into matters pertaining to life at the international border through and through. There is no development there, no accountability for human life. Land concerns and matters are one side of it, what we need to ask is what is being done for the people there, what is being provided to them! There is no sense of governance, only that of a political approach.

“There are no victories in war. There are only victims.”

Switching to your other project, ‘The Gaze’, what did you find to be most worrisome while your camera acknowledged the gaze of Kashmiri women and children?

There is a very strong sense of self-respect in Kashmiri people, but just as strong is the sense of pain. They have seen generations suffering, and have sustained the impact of militancy from decades. The cost that they are paying in terms of pain and suffering reflects in their eyes. What they are dealing with is the worst that one can, and still, there is no government policy or understating offered that would signal a possibility of change.

I gathered from your website that you’ve also visited and shot in Muslim countries like Dhaka and Istanbul; what did you learn about the community whilst capturing it through the prism of your camera?

I feel that the Muslim world is in turmoil, within them, and with the outside world. The rise of terrorism and its impact, which has made the world to perceive every Muslim as a terrorist, has taken their sense of individuality, and so badly that there is none.

Quoting Avani from her website, “A defining aspect of a conflict zone is that the world ceases to acknowledge the ‘individual’ and instead stereotypes the entire ‘community’. Conflict is a profitable business in today’s world. It is sold as a commodity and often at a huge cost to humanity. In India we see this malediction sprayed across all channels. In the cacophony of voices that are heard, to speak without reflection is the motto. While men are often the more direct targets of violence; the trauma for women and children is of no less a magnitude.”

Coming to the experience of visiting conflict areas, what do you have to say about that?

It is very painful, every time I shoot I wait to come back and go again. But what you see there and the realization it leaves you with tends to affect you at a deeper level. Our country has neglected a community for ages and ages, so much so that there remain no strings with the rest of the nation. All threads of acknowledgment have been cut, and their identity – Muslim, and that too, Kashmiri Muslim, only makes life more difficult for them.

“Between a media that holds them to shallow nationalist standards each day and an indifferent regime, we as a country have let down Kashmir.”

And from the perspective of a woman photographer?

I have been a part of anything and everything, and it has been dangerous at times. But I think media exaggerates about it being life-threatening. Also, with the camera doing the interaction, the experience is different – the ‘you’ disappears from the situation. What you feel about them and their situation does not keep importance, your self is shed and you are there only to understand what life has to offer.

Indeed. Moving on, I also explored the other genres on your website; what is the photographer referring to in this particular image (above) that falls under ‘Conceptual’?

Ah, I wouldn’t say that there was a story behind it, because there wasn’t. When we speak of a fashion shoot, we think of glamour, big rooms, glitters, props, etc. In this photograph, which I wouldn’t want to call glamorous, what I have tried to picture is fashion in coherence with life around.

And lastly, if you could share about your understanding of ‘Portraiture’, and your approach for the same?

In portraiture, you are trying to understand the good, the bad, the ugly, and it is different things to different people. But it should make you want to look at it again. When shooting, you are bound to get biased, to get the best possible outcome, but you also need to absorb and make your perspective reflect. For me, portraiture is to understand the person, to say something about them without feeling the need for writing about them.

This article was first published on September 7, 2018.