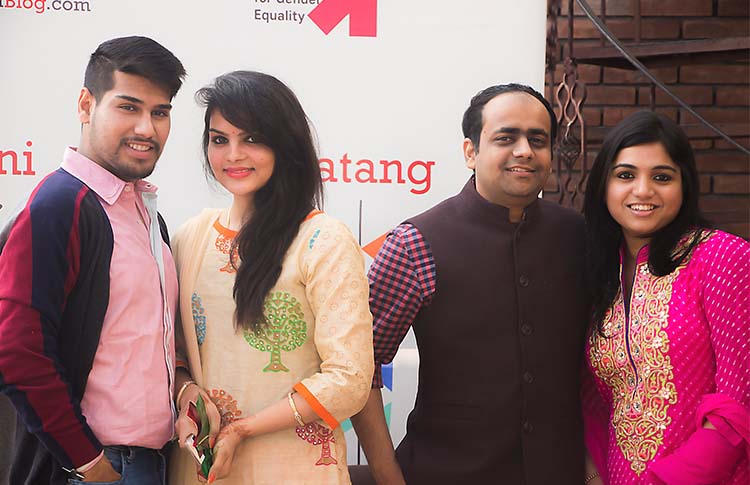 Makar Sankranti, the colorful festival that brings all friends and family together, is also one of our favorite festivals of all times. This year, we decided to get some newlyweds together to add flavor to our Sankranti mischief.

When a couple gets married in India, there’s always more to the relationship than just them. They are supposed to walk on the path chalked by their families, because honestly, they don’t have much of a clue, anyway! In collaboration with HeForShe, UN Women Solidarity Movement For Gender Equality, and Chah Bar (Jaipur), we organized Pati, Patni Aur Patang.

The women write their dreams on the kites and fly them while their husbands hold the charkhis (that are actually belans) and stand by them in support.

Here’s how everything began:

The JWB Army reached Chah Bar and turned into interior… um.. out-erior decorators. They started by creating thread-and-kite chandeliers to be hanged from the lamps.

The staff at the Chah Bar stared at them from a distance, making sure that they don’t trip and fall off the rooftop.

I, calling myself the ‘patang expert,’ began tying the tang in the patangs. I was the coolest; I’m not afraid of boasting, lul.

One by one, the couples entered. Psst. We roped in our very own Dr. Sudhir Sharma and Lady Boss Ana to participate in the campaign. Let me show you how diverse the couples were:

Himani And Tripur Gotewala – Married for one month. Shy and curious.

They entered the venue with their eyes searching for a familiar face, seeming unsure about having come to the right place. They were so shy that we all found them adorable.

Ankita and Nikhil Bansal – Married for one year. Interactive and chirpy.

Happy and excited to fly their kites, they entered searching for the thread wrapped belans.

Ana and Sudhir Sharma – Married for six years. Upbeat and, of course, the coolest bosses ever.

Holding big grins and checking the standees and decoration on their way in, they seated themselves next to the two couples.

I had my questions prepared; I was going to add some fun before letting them go and fly kites. A disappointed Nikhil gave into our preparation and sat down with his eyes fixed on the table with kites.

The couples suspiciously looked at me and then back at each other. I was happy, cuz I’d got t3h power.

Me: Will you live with your wife’s family for a month?

I saw two red kites and one green.

Tripur: It would be strange because I’ve never really communicated much with them.

Nikhil: Our families will freak out! But hypothetically, if the family scenario weren’t involved, I’d love to because their hospitality is a class apart. I can munch on to stuff the whole day.

Sudhir: Why not? I’d love it, plus it’s a foreign country, so I’ll get to rest, and be away from work for a while.

Me: If she has a great career and can’t stay at home after the baby is born, would you take a paternity leave and look after the baby?

Tripur: I would if she’s doing so well that she needs me to be there for her.

Nikhil: I’m not sure. I think it won’t be correct for the mother and even the baby’s health. I can’t give the baby what he/she would need from the mother.

Me: Do you accompany her to the beauty parlor?

Tripur: It’s just been a month! Haven’t really gotten a chance. And besides, it’s boring!

Jayati: Aha! What a perfect excuse!

Nikhil: I have, once, before we were married.

Ankita: Liar, that’s just because you wanted to meet me!

Sudhir: I accompany her all the time, but I agree with Tripur, it’s very boring!

Me: Do you trust her driving abilities?

Himani smirked at Tripur and knew his answer.

Sudhir: I don’t, because, even when I’m driving, she has her foot pushed as if trying to apply brakes.

Me: Are you a feminist?

Tripur: I’m a feminist because I believe in equality of men and women.

Nikhil: I don’t believe in feminism because I think men and women have different responsibilities, and they are entirely different individuals.

Me: Will you be okay if your wife earns more than you do?

The next questions were lined up for women. It was their turn to climb into the ‘grey’ area.

Me: Do you believe that the way to a man’s heart is through his stomach?

One green and two reds.

Ankita: No, I don’t believe it, because there are many other ways!

Ana: Haha. Exactly why I raised a red.

Me: Do you let him have his boy time?

Ana: I feel lonely without him!!

Ankita: I don’t mind, he can have all the boy time he wants!

Me: Would you mind him going for a wax?

Two greens and one red, interesting…

Me: Have you accepted all of his female friends?

Ana: They are not right for him!

Himani: No! Girls can get flirtatious with him.

Ankita: Yes, I have!

Me: Do you check his phone?

All three greens! Girls will be girls!

Me: Do you believe you’re an independent woman?

All three confused, oh no!

Ana: I’m still getting to the point where I’d feel I’m completely independent.

After our fun little game, Shubham and Rishi from #HeForShe, UN Women Solidarity Movement For Gender Equality campaign addressed the couples, applauding men for their support towards their wives.

As they do in the saath pheras, the men pledged that they would stick to their wives sides forever, in whatever they aspire, they’d be the wings to their dreams and declared it by signing the promise.

It was finally the time Nikhil was looking forward to, and Tripur and Himani were dreading (Psst. They didn’t know how to fly kites).

The women wrote their wishes on the kites of their choice, and while Ankita had a whole list of wishes, including being a successful entrepreneur; Himani only wanted a cute pet. Tripur, lucky much?

Ana wished for an Indian Women Blog (Ana, we’ll work hard to make it happen!), and the husbands stood in full support of their wives!

Off went the dreams into the sky, and the men were the threads holding their wives dreams high.

The kites would dwindle, and the husbands would take over to save their beloveds’ dreams.

Kinda made me want to marry for a minute, on second thoughts, I know how to fly a kite, so my prince charming, please wait while I fly my dream embellished heavy kite!

We could sense the aromatic kebabs, paneer tikka, and spring rolls at the Chah Bar. We forced our feet to stick to the ground while guiding the couples to the food. I think the aroma did the talking.

After the couples had finished with the food, the JWB team attacked the snacks. Aashi even faked a cold so that she could have got the delicious coffee first. (Sorry, bro.) As Jayati left to see the couples off, I managed to gulp down the coffee, as the temptation didn’t let me wait. (Sorry, bro)

We completely forgot about our photographer Sanchit, who had consistently failed in trying to sneak a bite or two. Fortunately for him, we noticed just in time and let him be a part of the jungleepan.

Happy Makar Sankranti, everyone.
Wives, we hope you launch your dreams today.

Husbands, we hope you stand in support of her.