Parents Don’t Own Their Children, We Are There To Help Them Grow Into Their Own Unique Personality: Indu Arora 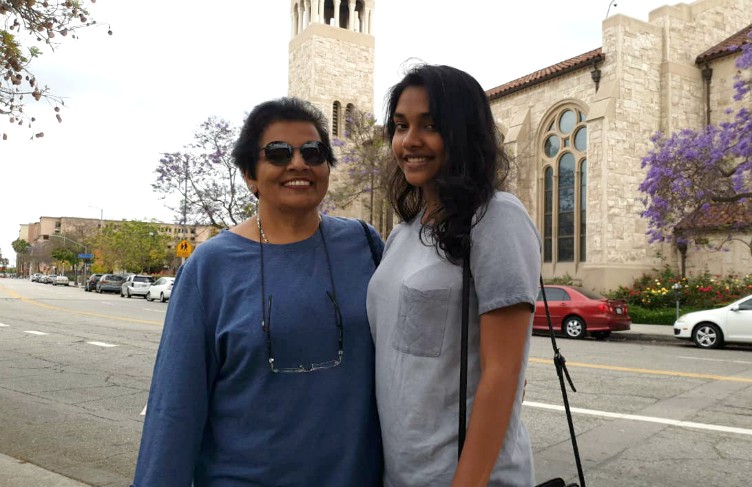 “I wanted my daughter to become a doctor, follow in my footsteps and enjoy the same respect I get today. But she had forever wanted to be a writer, something which I have never considered as a profession. I pressurized her to take science in school, made her take tutions, as I wanted to see myself in her. But I soon realized that my daughter is a separate individual and my duty as her parent is not to make her my copy but to let her grow into her own magical personality.”

These are the words of Indu Arora, a mother who successfully bridged the dreaded ‘generation-gap’ that threatens to weaken the beautiful bond that a mother and daughter share. Today, her daughter, Nikhita (23), lives in Mumbai, miles away from her, yet the distance does not dampen the love and care they have for each other.

Celebrating this unbreakable bond, Indian Women Blog has collaborated with the unique online gift store, Bigsmall.in for our campaign So Mamma Says. Under our campaign, we will be talking to three awesome mommies, who will also write notes, which can be mushy messages or free advice, and choose quirky gifts for their daughters which will be interchanged between the girls.

So, the first mommy we had an engaging chat with is Dr. Indu Arora, head of the Opthalmology department in Mahatma Gandhi Hospital, Jaipur, and her daughter works as a writer in Mumbai. Sharing how her bond with Nikhita evolved and strengthened over time, Indu shares tidbits from her journey she had with her daughter. Excerpts:

My mom has this annoying habit where she tends to share embarrassing stories from my childhood with complete strangers. Is there any such anecdote that your daughter has forbidden you to tell anyone, but well, as mommies function, you still share it?

Yep. *she starts laughing* There are many, but the one she is the most embarrassed about is when she was rather young, around four, she would come to dance in front of me and my husband as we read the newspaper. She would be wearing her lehengas, draped in my sarees and she would twirl around! Heh, I think we made thousands of videos of her.

Now, when we show those videos to someone, she is all like, “Mumma, what is this?! This is so embarrassing. Why are you showing this?!”

I can relate with Nikhita here *I laughed*. So, as we know, moms are the treasure stock of both wanted and unwanted pieces of advice. Do you have any such advice for your daughter?

No advice but a message that just be safe, please tell me when you return home, even if it is 3 am and it would break my stupor. Just call, chances are because I was so worried about you I couldn’t even sleep in the first place.

In conversation with Indu Arora

There is one more thing that moms are known for- making rules for their kids that they themselves don’t follow. Are there any such rules, that you blatantly break but scold your daughter for, when she so much as thinks about overstepping it?

Haha! Yes. In fact, the funny part is she caught me red-handed breaking that rule. Actually, as she would describe, I am always after her life when it comes to using gadgets, especially mobile phones. I have reprimanded her countless times for having her face buried in the thing when we were supposed to have family time.

Once we were on a family vacation and me and my husband were both on our phones *rolls her eyes* and she being the Sherlock Holmes of our family, took a picture of us in that moment. She was all like, “Now I have proof that I am not the only rule-breaker in this family, the rule-setters stray away from the path too.”

Oh, I so agree with her. So, do you believe that if today your daughter were asked to describe you, she would use the words “cool” and “fun?”

It depends on how she perceives me. We have this understanding now that yes, I am her guardian but also, yes, I can be her friend without ditching my responsibility that I am her mother. As a mother I try to give her things I never had. Like in my days, having a relationship was unheard of and frowned upon, and I know what hardships I had to undergo when I was secretly dating Nikhita’s father.

In conversation with Indu Arora

She has the freedom to make such choices about her life. It is not that I have given her ‘permission’ but just that I never took that power away from her once she became an adult. Earlier, when she was younger, I never pegged her as a responsible individual but now I can say that she is very focused and knows what she wants. Like, I wanted her to be a doctor but she proved to me that I shouldn’t decide what she wants to become.

As they say, the stronger the bond between a mother and daughter, more are the conflicts that test their relationship. So, did this point, of you wanting her to become a doctor, put a strain your relationship?

At that time, I was so sure that what I had in mind for her was better than her dreams. And I know it now that I must have hurt her in the process. But the day she passed her 12th boards and her results came, I realised my mistake. The three subjects – Physics, Biology, and Chemistry – for which she was taking multiple tuitions, she had graciously passed but when it came to English, the one paper she never studied for, she had scored the highest in her class.

I came to my senses and told her to stop suppressing her dreams because of my wishes and live her life the way she sees fit.

So, when did you bridge this scary generation gap that is known to create a pit in the relationship of parent and child?

I am still in the process of accepting that no matter how alike a daughter and mother are, at the end of the day they are two separate individuals with unique personalities. A parent is the custodian of their child, we don’t own them.

Looks like it’s not only the child whose understanding widens as they age. So, is there anything that you’ve learned from your daughter?

As I played with Bruno, Indu recited a beautiful poem, of the hundreds that she had written for her daughter.

Please walk into this heart of mine,

Let’s connect the world’s, yours and mine

It’s the safest haven, this heart of mine

‘Tis ‘magic land’ this heart of mine

‘Tis an unfathomable sea of love, this heart of mine

Occasionally there maybe be tough weather in this heart of mine

But there’s is also always the soothing salve, in this heart of mine

Softly, we’ll ride the occasional rough wave in this heart of mine

Through any storm, we will emerge, victors, when you are in this heart of mine

Let’s rejoice together, your heart and mine

Godspeed to all your future ventures wishes this heart mine

Together we discovered many treasures, your heart, and mine

They are all yours, these gathered treasures of this heart mine

I bestow upon you, these treasures collected  by heart mine

They are yours, they are all yours, these treasures in this heart mine.

Stay tuned to read the emotional-quirky-funny messages from the mommies and know what amazing gift they choose for the girls!