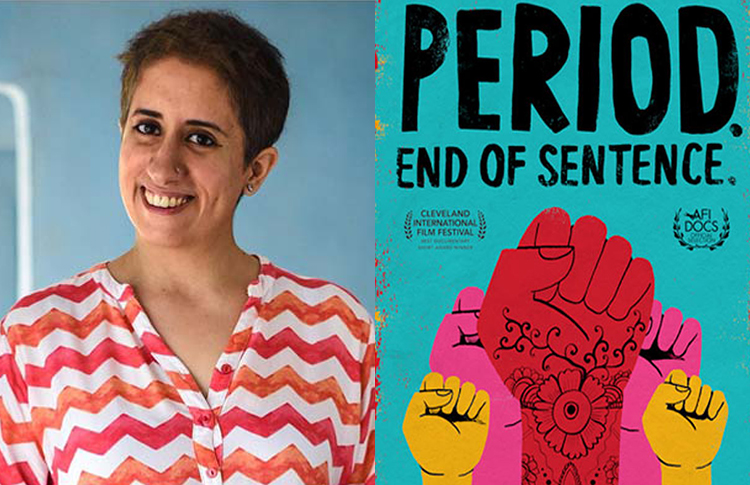 After her triumph at the Academy Awards earlier this year, she’s earned the title of ‘Indian cinema’s world citizen’, but ask Guneet about her films and she’ll take you beyond the accolades to the importance of working hard and owning your struggle. No wonder she’s known for backing strong independent content!

‘Period. End of Sentence’, co-produced by Guneet and directed by Iranian-American filmmaker Rayka Zehtabchi, won the Academy Award in the Best Documentary (Short Subject) category.  The documentary, set in Hapur village outside Delhi, depicts women leading a quiet revolution fighting against the deep-rooted stigma of menstruation.

Quick anecdote: When Guneet received the news about being among the five contenders in the documentary category, she was in Indore, eating paan at a friend’s wedding, “I was at Sneha Khanwalkar (Music Composer) and Kanu Behl’s (Director) wedding, when I got the shortlisting news, it had come out on Twitter. I was at the paan stall then, and yeah, I celebrated in that moment eating paan with friends,” she laughed.

Founder at Sikhya Entertainment, Guneet has produced several films and documentaries, including The Lunchbox, Gangs of Wasseypur, Masaan, Peddlers, and it was a decade ago when her short film on bonded labour in India, Kavi, had first made to the Oscar red carpet, under the nomination of ‘Best Live Action Short Film’.

IWB got in touch with Guneet ahead of the Woman Up! Summit recently, to seek her expert advice regarding potential opportunities for women in the age of streaming media, and to learn more about her women-support-women mission.

In one of the previous interviews you shared, “Each one of us needs to put another woman forward. That’s my mission.” Tell us a little about how you are working towards this mission; we are sure you have many beautiful victories to share.

For so long we (women) have been told that we have very little opportunities, so we have always kind of been in each other’s competition – which we actually are not. In the first place, there is enough and more for each one of us. As it is believed, when one woman goes ahead, she opens the door for ten more with her; that is exactly how it should be. We shouldn’t look at each other as competition, rather as support system. So the mindset needs to change and evolve. In my world what I am doing is making a lot of movies – by women, on women – for the whole world to watch.

Speaking of which, you also have your own YouTube channel called ReDo, which is by women, for women. What other women-focused projects are you working on at the moment?

We did decide to start a YouTube channel, but in the meantime we have moved a lot of content to other platforms that already have the audience space built in. We are doing a lot of women-oriented stories, in the form of movies, shows, and audio shows; working together with the all the wonderful platforms in existence.

You started at a time when there were no global buyers like Netflix or Amazon. What were the unique challenges in the beginning of your career, and how different do you find the situation today for the filmmakers who are just beginning their journey?

There were a different set of distributers from around the world that time, which still exist. But film festivals were the only route for breaking out the content. So in that regard, now clearly is a good time because buyers have increased in the market; there is Netflix, Amazon, SonyLiv, Jio,  all incredible buyers, and that allows filmmakers to have more content put out. I feel from now to next five years is the best time for filmmakers to make content.

I feel that with so much going on has become even more important for one to be true to their craft. Technology has made things a lot easier, there are 4k phones on which you can literally make a movie and even edit it, there is a lot of focus on video formats in smartphones for the clarity of visuals – so it really comes down to harnessing the craft of telling the story. A lot is happening and opportunities have increased, but how well you make use of that potential, to stand out in your work and storytelling, is where the focus should be.

Shifting our focus to ‘Period. End of Sentence’ – With Kavi on the Oscar red carpet and later travelling to your first international film festival with That Girl In Yellow Boots, a fast forward to now, when you are voted as one of the top 12 women achievers in the Global Entertainment industry. Tell us about the behind the scenes of these film festival journeys that you’ve undertaken.

Nothing happens overnight, it’s one film at a time. It’s not like we make a set plan that okay this film will breakout and we will take it to so and so festivals; it’s completely an honour for any film from India to be selected. And then it is about what you plan for the outreach plan – in terms of reaching out to the right people for the conversation to go forward. Making sure that they see it, and then maybe buy it, or release it, or they support by writing about it, it is very important to have your film introduced to the right people. All this work happens on ground there, and it proceeds like an organic process for each film – be it from Peddlers to Monsoon Shootout to Lunchbox, which really did breakout, or Gangs of Wasseypur — for each film it has been a different strategy of pushing it once selected.

How important is the role of networking and connections in your opinion; if you could share quick tips for women in the industry on how to make connections that matter?

One thing is to make movies, another to work on the outreach; and they both go hand in hand. It’s not like you make a movie and can sit thinking of it as a big feat. You have to have an outreach plan in mind. You have to do your research, and know the people you want to meet, and about the films have they made earlier, to know the dynamics of collaboration. So it is important to have context. And going to festivals, even coming to MAMI, Mumbai or Film Bazaar in Goa, you meet a lot of people who are interested and who support Indian talent. For me it all started from there, from the home ground.

Still from the film, ‘Period. End of Sentence’

In one of the interviews on ‘Period. End of Sentence’ back in February, you said, “India needs 50 more producers to do the kind of work I do, for a change to happen.” What do you think hinders this positive change in today’s scenario?

Firstly there has to be interest in doing the work, when you are interested you are driven. I think as producers the impact you have in storytelling is more long-term, it is not transactional, it is not like a job that you’re doing; it culminates over a period of time. So having a view of at least five to ten years, will be a better situation. Independent producing is a lot of hard work, you’ve to raise money, you’ve to hustle and also own it — so one has to be willing to doing this, and if that is in place, there’s nothing that one can’t do. If you focus your mind and energy, you can do anything.

Bollywood has marked one year since the beginning of the #MeToo Movement. What has been the real progress for the industry so far in your view, and what is the way forward?

There’s definitely more awareness and caution. Also, more importance of social media. This is such a close-knit industry; I would not say that there have been actions taken to even implicate and understand, and it is not very easy to do that. It becomes important for the person accusing to come through and fight a legal battle, which is never easy, but yes I do feel that it is very hard for a woman to put out her story; it is hard for anyone to put out their personal distress stories. There’s a lot of shame, a lot of risk attached. So more power to them who spoke and I think the paradigm has shifted a little bit about being more aware and cautious. And the younger generation is even more aware.

Lastly – many congratulations on being a part of the third chapter of the ‘Woman Up! Summit’, what does ‘Woman Up!’ mean to you?

For women to be at the top – up there, celebrated, beautiful, and amazing, with all the flaws and all the glory put together.