Only When A Woman Is Emotionally & Mentally Happy Can She Be The Mother Her Child Needs: Antara Pandit 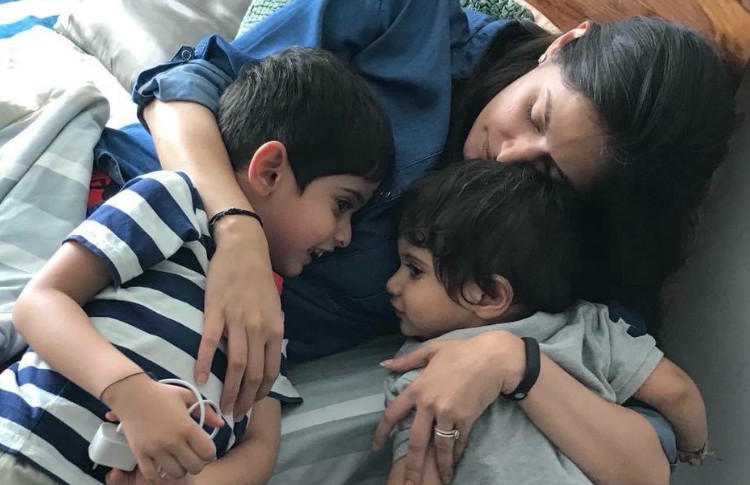 “I love being a three times a week wine drinking, working, sleep four hours a night, unfit mom…because the only way to survive to be a happy mom, is to bring a little bit of laughter, sarcasm, joy & bliss into daily life.”

That’s Antara Pandit mantra to being the awesome mother that she is, but as all things done by women are judged by the society, her decisions about how she will raise her kids were criticized by those around her. The most crucial decision, for which she received a lot of flak- her choice to not breastfeed her second child. Shocked? Are you already judging her without even trying to know the reason behind her decision? That’s society and its repressive thinking that has conditioned us to think the way we do.

So, with the mission of smashing this narrow mentality of our society, IWB brings to you its latest campaign #JudgeMeNot, in collaboration with Craftsvilla, which focuses on breaking the binds of society’s judgment on everything from a woman’s outer appearance, whether she fits the idealized version of being a mother or her professional choices.

Excerpts from our chat with Antara:

So, what was it that led you to take the decision to not breastfeed your newborn?

Each person is different in their parenting style, there is no one style that fits all. There are choices and decisions that everyone takes differently. Like I chose to not breastfeed my second child. I took the decision because when my first child was born, I had a case of baby blues, something which many new moms experience after childbirth.

I would start crying out of nowhere, had no appetite, I didn’t know what I was feeling, everything I did, my kid did would make me cry, I felt I had no control over anything. I tried to breastfeed him for three weeks but to no avail, it was very torturous and traumatic for me and an experience I didn’t want to repeat. My family was very supportive, they said that I was the mother and at the end of the day it needed to be my decision about how I raise my kid.

The next main reason behind my decision was the fact that often, new mothers, tending to their second newborn, stop paying adequate attention to their older child and themselves as well. Your eldest shouldn’t feel left out or ignored.

And was there any positive effect of this decision you took?

I had ample time to be a mother to both my children as I didn’t have to be on my toes to feed my younger son every two hours, unable to give any time to my older son. I would drop my son to school, pick him up, go with him to his football classes, there was no shift in his routine. And hence, there was no animosity from him towards his younger brother, as he still had his mother by his side which so often is not the case for other older kids who are left feeling alone once their baby sibling enters their life.

I never felt that ‘breastfeed is best’, I think ‘feed the best’ is the way to go. It shouldn’t matter whether it is my milk or formula milk from where my son got the nutrients he needed.

You must have received a lot of criticism by people because how dare you break their perception of how you should go about being a mother.

Hell yeah! They were like, “How can you even consider yourself as a mother if you don’t breastfeed your child?” No one wanted to know the ‘why’ behind my decision. Also as I was bottle feeding my younger child, I was pretty free to pay attention to myself as well and actually plan my day, travel to places. So as soon as he was three months old, I went on a girl’s trip to Amsterdam with my besties. Everyone was like, “Oh, she is a new mom, how can she even think of leaving her child behind?”

But what these people don’t understand is that sometimes even a mother needs a break, a relaxing time out, no matter it is her first child or second- it is challenging. People were judging me, even the ones who knew me.

Did these comments ever threaten to crumble your resolve or you felt overwhelmed by these judgments?

I am only human, of course, but it did not deter me. I have always been someone who may listen to other people, but when it comes to the decisions of my life, no one can take that control from me. I will not lie, yes their words pinched me a bit, but in the end, it only egged me on to not only make my own decisions but also tell the mothers out there that they are entitled to the same.

And those people who can’t help but comment on every decision a mother makes, well, these people really need to look at the bigger picture, the real reason behind the decisions she makes. What they need to realize that for a healthy and happy baby, the mother needs to be mentally happy as well. It’s not just her physical health that matters but her emotional health as well. A happy mother makes a happy child and there is no changing or reversing this equation.

What began as a documentation of her own internal struggles for Antara soon blossomed into full-fledged parenting blog called The Bubbly Blogcast. Once she realized that her personal insights into parenting were helping other parents, she started working on content that would make a difference to expecting, new and veteran moms all over the world.

The topics she picks are extremely relatable and address many challenges which moms face but do not talk about. Her blog is a platform which sparks discussions globally on things that were earlier considered too taboo to talk about.

So true. I have often seen that family members and people around a new mother are more concerned about feeding her gondh ke ladoo rather than making sure that she is happy.

Yep, that’s how it goes. And that’s what has given women the mentality that they need put themselves second no matter what the scenario is, which becomes mandatory when they become a mother. First thing is that parents need to be equal partners when it comes to taking care of the child, second, a mother needs to take into account what she wants as well because whatever emotion she feels is what her child will feel. Mothers should make any decision they need to make sure that they are emotionally stable.

Do not let other’s judgment stop you from doing what makes you happy. Don’t make the parenting style of others a bar you have to somehow match up to.