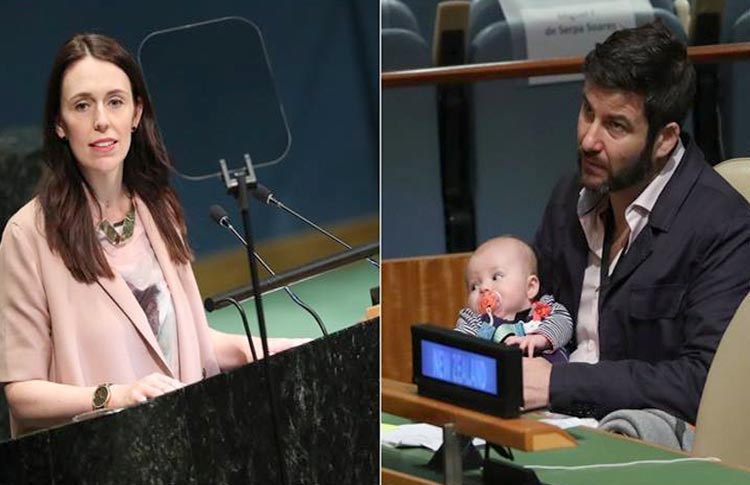 On Monday, Jacinda Ardern, New Zealand’s Prime Minister, brought her three-month-old daughter, Neve Te Aroha, to the United Nations General Assembly. As she spoke at a peace summit in the General Assembly, her partner, Clarke Gayford, held the infant on his lap. A fishing television presenter, Gayford traveled with Ardern to New York to look after the baby. The infant also got a security pass.

Because everyone on twitter’s been asking to see Neve’s UN id, staff here whipped one up. I wish I could have captured the startled look on a Japanese delegation inside UN yesterday who walked into a meeting room in the middle of a nappy change. Great yarn for her 21st.

“I have the ability to take my child to work, there are not many places you can do that. I am not the gold standard for bringing up a child in this current environment because there are things about my circumstances that are not the same,” said Ardern.

“If I can do one thing, and that is change the way we think about these things, then I will be pleased we have achieved something,” she added.

“Prime Minister Ardern is showing that no one is better qualified to represent her country than a working mother. Just 5 percent of the world’s leaders are women, so we need to make them as welcome here as possible,” UN spokesman Stephane Dujarric said.

People took to Twitter to share their appreciation at this example of Ardern becoming an example that women can effectively balance both motherhood and professional life. She is challenging the conventional stereotypes that women battle on their capacity to lead and be mothers.

Hero to working moms everywhere, New Zealand PM Jacinda Ardern arrives with her baby in a stroller at the UNGA

This story is important because: 1. This should be the norm 2. The presence of a child may help politicians keep things in perspective 3. A reminder that we need a baby UN https://t.co/IzBbJHmyTT

Big thanks to #NewZealand PM @jacindaardern for personally initiating Take your baby to the #UN Day. Bold & important precedent for working parents everywhere.

‘New Zealand prime minister Jacinda Ardern has made history as the first female world leader to attend the United Nations general assembly meeting with her newborn baby in tow.’ https://t.co/CN3oNGG5wI

UN debut – Neve Te Aroha, 3-month-old daughter of #NewZealand PM @jacindaardern and @NZClarke, appeared in #UNGA hall when her mother spoke at the #MandelaPeaceSummit. Ardern is only second elected leader to give birth while in office, after #Pakistan’s Benazir Bhutto in 1990.