My Question Is, What If Lord Ayyappa Was Never Attracted To Women: Madhavi Menon 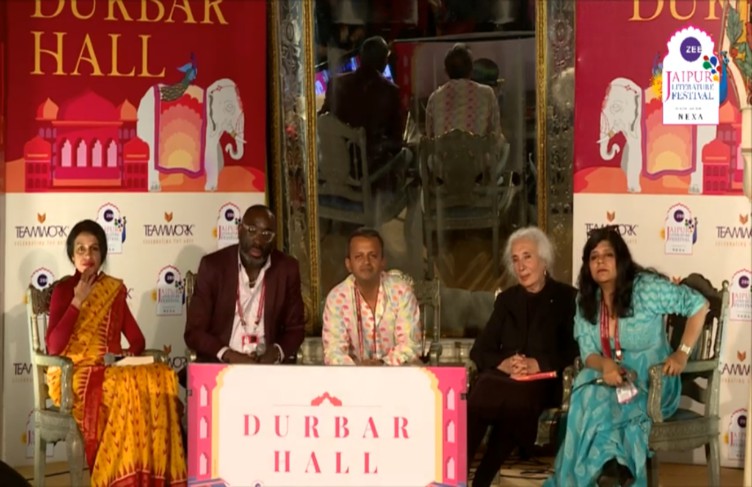 While the second half of last year saw some ground-breaking Supreme Court verdicts like the slashing down of Section 377 and calling off the ban on women of menstruating age from entering Sabarimala, to what extent have these decisions materialized?

The very same question was explored in a JLF 2019 panel discussion titled “Rainbow Readings.” Comprising of writers Chike Frankie Edozien, Madhavi Menon, Sandip Roy, and Tova Reich, while the majority of panel discussion focused on selected readings from their texts, the conversation also explored the political and social atmosphere for the queer community in India and the world.

Frankie began the discussion by explaining why he chose to write a non fictional account on gay experiences by saying, “There were no voices to counteract the popular narrative. I felt like we needed to stop dillydallying with these stories. The need was to put them out there and in the centre.”

He also shared how the biggest validation comes for him when he is approached by queer individuals who thank him for giving them a voice and say, “We have now seen ourselves in literature and not as caricatures for the first time.”

However, it was Sandip’s passionate discussion on the idea of secrets and Section 377 in India that made the heart of the panel. “In Indian families, when you come out of the closet, the entire family goes into the closet. The whole thing becomes about ‘don’t tell this person,’ ‘don’t tell that aunt,'” he said.

On being asked what the slashing of Section 377 has done for “such Indian families with secrets and with children who identify as queer and if he thinks a lot has changed or a lot is going to change,” he said, “The short answer is “no.””

However, he quickly added, “The long answer is ‘no but the law had to change for that other change to be even possible.’ I think at this time when we are in the euphoria of what has happened in the judgement of September, it becomes somewhat difficult to realise that this fight has been going on for a long long time, 20 years.”

“I knew people who published in early nineties from Delhi a tiny pink booklet called Less Than Gay. In it there was a charter of demands, one of which included the repeal of Section 377 and gay marriage and my friend Siddharth was one of them. I thought these guys are asking for the moon. Who in India in their right mind would be making all these demands? Siddharth died in 94 or 95 but here we are and it has happened,” said Sandip.

However, he did express his amazement at the fact that all of it has actually happened, a realization that has taken a while to sink in. “But I honestly have to say that violent September in someway felt like its time had come even despite what happened couple of years ago. There was a part of me that still felt like “wow, I was never entirely sure it would happen in my lifetime.” And so it was more emotional than I thought it would be even if it was like just symbolically having that verdict.”

He added, “Three years ago, two judges of the SC had said, ‘You are a minuscule minority of the fraction therefore somehow undeserving of “so called rights.”‘ They used that word “so called rights” which clearly implied that there weren’t very many of you so you were undeserving. If a few years later the same Supreme Court says that “you are what you are” and a judge says that the community is owed an apology whether that apology comes or not it still means something, it has to.”

Madhavi Menon completed Sandip’s idea by reiterating something that she has said at a number of occasions, “Desire is never straight and straightforward. There have always existed alternative traditions of thinking about sexuality and desire in India that may not be recognizable according to certain narratives that we have today but that very much exist.”

The coherence of the thought lies in how humans have always tried to confide or control gender and desire in heteronormative standards and linear arrangements while it is in their chaos that the right order pervades.

She completed the idea by drawing a corollary with the Sabarimala issue. Madhavi said, “So the idea is that what if Lord Ayyappa gets attracted to those women who enter the shrine? My question is what if Ayyappa was never attracted to women?” Now, that’s some solid food for the thought, right?