Mr. Rajesh Agarwal Claims To Be A Conservative Husband. Find Out Why! 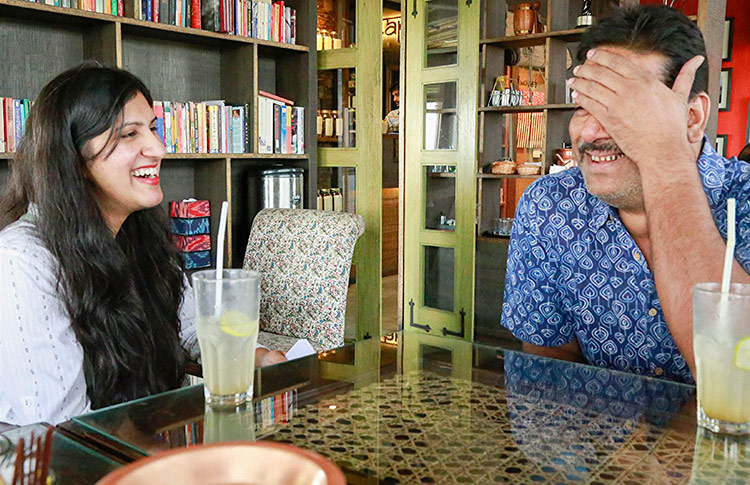 Nayaab Jewels, as a part of a sly campaign, have come up with something goofy and mischievous. The campaign involves few “Nayaab Husbands” hesitantly, but willingly opening up about their negative qualities. Some of them are being “forgetful”, “conservative”, “boring”, “cheating” etc. Well, owning up takes a lot of courage!

Husbands are all guilty of being imperfect, and that’s why JWB and Nayaab Jewels decided to rehabilitate the imperfections of being good husbands with bad qualities. The campaign Imperfect Husbands intends to showcase that beyond all their bad habits, husbands are truly in love with their wives.

Some of you may already be aware of it, as Nayaab Imperfect Husbands have been doing rounds of the Jaipur print media! Ahem.

We met Mr. Conservative Husband Rajesh Agarwal who was slightly nervous in the beginning. He tweaked his fingers, adjusted himself in his seat and timidly smiled. Throughout the conversation, we could see it in his eyes as to how much he cares about his wife.

You want to know something really cool? He’s our newest Intern Ayushi’s father! He was probably thinking that we girls were definitely up to some solid mischief, and we might pull his hair out or torture him.

Well, you know how we are! We were just there to extract their love story, and pick out his imperfect quality! Here’s what he had to say…

I didn’t believe in love before marriage, and used to think marriage is all about having a family, even when we were introduced to each other by our parents. For me, I fell in love slowly. I realized how love does not have to happen at one time or another, it just happens with the blink of an eye…

Yes I’m conservative because I believe in love letters over email or talking on the phone because love letters build memories that no telephone conversation can match. Do you remember how many letters I wrote to you when I was away in Gujrat for over two years? It was the most I ever missed you. Though, I was embarrassed when Ayushi read the letters, it’s still a beautiful memory.

My favourite festival to celebrate with you is Diwali, I admire how you create Rangoli and decorate the entire home traditionally, and the festive feeling automatically fills the entire house. And after getting ready in a beautiful bright saree, you make the festival even more vivid. You might think that I don’t like you wearing jeans and top because I am conservative, but it’s really because I love seeing you in a Saree. Every time I see you in a saree, I am reminded of the coy, young, graceful girl I married.

Being a conservative husband, you expect me to eat aalu paranthas at home, and that’s when I put on my western goggles, ready to eat some Pizzas and Maggi!

As a conservative man, I don’t keep secrets from you but Ayushi and I surely share some moments mocking at you when you’re not looking!

I’m not so conservative anymore thanks to you! I don’t buy you the old-fashioned roses as you adore Jasmine.

I don’t find it safe for you to leave home late at night, but it is only because I’m concerned about your safety. After all, at the end of the day, that’s how we balance each other! You are the practical one, and comparatively more open minded than I am. Isn’t it an amazing combination?

I’m the old fashioned one, and even though I like the idea of long walks under the moonlight, I love taking you out for a drive around the city, shopping and romantic dinners. Oh, how I force you to buy sarees and clothes and you always resist buying them and when you make up your mind, you stay put to purchase the most expensive clothing ever! I have a traditional taste but you, my love, are the classiest.

The most beautiful accessory wear is a bindi. Yes, you might think this is because I’m a “conservative” husband, but how much does attire really reflect on whether a man is conservative or not?

Dear Reema, it’s basically “thoughts” that make a man conservative. It is my love for you that I can proudly call traditional, because traditional love is the purest kind of love.