Mr. Purshottam Srivastav: I am her father, friend and son 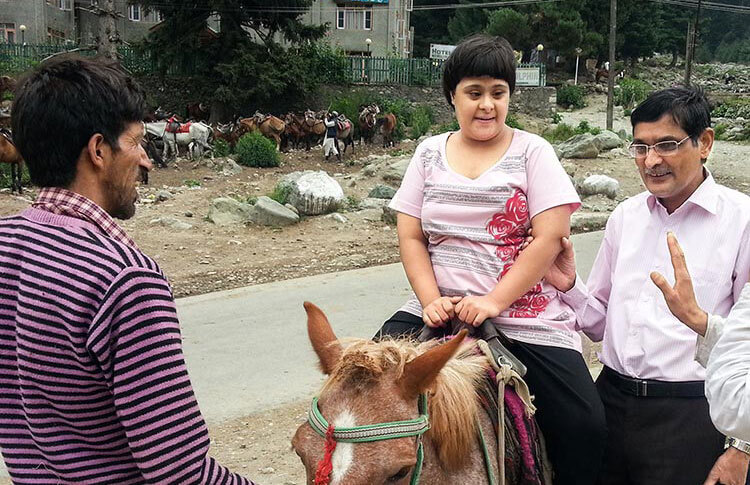 One day we received a letter from her school, “Congratulations! Rupali has become a celebrity!”

Rupali’s parents received this compliment when her painting got selected by Child Rights and You (CRY). This girl is actually nothing less than a celebrity!  She has walked the ramp! She has won dance shows! She has a flair for fashion! And she has appeared in the newspaper!

Meet Rupali Srivastav, a 22- year old special girl, suffering from Down syndrome, also known as Trisomy 21. She also underwent a heart surgery at the mere age of five.

But what truly make her special are her jovial nature and her strength which she draws from the daddy dearest. Her amiability is contagious! Through the Special Daddy Campaign, I got the chance of meeting her and chatting with her special dad.

“I am her father, but she treats me as her friend, father, and sometimes even as her son! Whenever I fall sick, she takes care of me like a mother, giving me my medicines, forcing me to see the doctor!” fondly said Mr. Purshottam Srivastav, Rupali’s father.

I noticed Rupali in the backdrop, looking a bit unwell. She was complaining of the shoulder pain.

“She is usually very social and talkative, but since the past two days, she hasn’t been keeping well. She likes to meet people, and mixes up very easily. Had she been in good health right now, she would have served you tea, chatted with you,” the father tells me.

And the very next moment he walks out of the drawing room to where Rupali was, to try to get her to come out to meet us. Meanwhile, I engaged her mother in a little chat.

“She loves dressing up. She likes cosmetics. And what’s more, she also knows how to use them! Foundation! Lipstick! Bindi! She knows everything,” said aunty.

Uncle joins in the conversation saying, “And nail-polish! She has a thing for nail- polishes! And that too, of a particular size, the one which easily fits her palm. She always keeps one with her, wherever she goes. Or even when she is at home. If her bottle breaks, we have to get her a new one within half an hour!”

Just then I looked down at my unladylike nails, and almost instantaneously, turned my fingers into a fist. Well, this is embarrassing!

Focus Priya! I said to myself.

So Uncle, tell me about the day-to-day problems she faces due to her condition.

She has a learning disability. Otherwise she is pretty much independent. She can eat on her own, dress on her own, but she is moody. She had delayed milestones. She is 22, and now she has started speaking properly. She had a hole in her heart, by birth, as an associated consequence of Down syndrome. She underwent a heart surgery at the age of 5. Doctors told us that the chances of survival were negligible. But by God’s grace, she made it through.

As he said this, the image of a little 5-year old girl, about to go in for surgery, lingered my mind. And it really made me sad. So I switched the topic…

How do you both spend time together, Uncle?

She’s always so full of life. She’ll laugh; have fun with everyone in the house. As I told you, she likes to talk. So every night, before going to sleep, I sit with her for an hour or so. We chit chat, tell each other jokes, giggle. Our day is incomplete without that. I take her out with me for grocery shopping, and whenever we go, she insists on having golgappas! She is very fond of them. I never feel shy to take her out for official and social gatherings. She enjoys them, and everyone likes her.

Even I love golgappas! Tell me more about her likes and dislikes!

She loves to travel! She has seen almost three fourth of India. Be it Andaman, or be it Jammu Kashmir, she has visited a lot of places. You know, she can even travel by herself. If you take her to the airport, she’ll tell you where the ticket counter is, where the trolley is. She likes beading. She has learnt it from school. Also, she is extremely fond of music and dance. She can recall even old songs, just by briefly listening to the tunes. She dances to Bollywood numbers. ‘Kajra re’ is one of her favorites.

Then aunty browses her phone and shows me a video of Rupali, singing some song. “She was watching a contestant singing on Indian Idol, and after his performance, she performed,” tells aunty. In that video, she was singing on the top of her voice, like a carefree person, with no worries in the world. How nice it would be, if even the so-called “normal” people could also shed their inhibitions, and be as cheery as Rupali!

Time and again, Uncle made an effort to bring Rupali out to the drawing room. And this time, he was successful! I finally got the chance to see her palm-held nailpolish!

She came and sat on the couch, but never leaving hold of Uncle. She was in a lot of pain, and so, Uncle fed her medicine.

How is her bonding with other members of the family, I asked Uncle.

She is closest to her grandparents. She plays a lot with her younger brother, Raghav. Whenever we try to make her do something to which she denies, Raghav takes over. He tells us to go and talks to her on his own. And the next thing you know, she happily comes out consenting to do the task. Such is their bond. Even we wonder at times, what magic spell this little one casts on her!

And what do you plan for her future, Uncle?

I have retired recently. So now I have thought of opening something up from the house itself. She can assist me with that. I have developed the upper portion of the house especially for her. She likes beading. Maybe I can start it commercially.

That’s wonderful, Uncle! Self-employing her is a great idea!

What message would you like to convey to other fathers?

Such kids are God’s blessing! And he has chosen us for them. So we should feel privileged! And we should do as much for them as we can. We should try more and more to make them independent.

Rupali has a thing for nailpaint. She never lets it get away from her.

Maybe these kids want to tightly hold on to these colors which are naturally missing from their lives in one way or the other. This is one way of looking at it. Maybe I am right, maybe I am wrong.

But shouldn’t their lives also be multi-hued just like the various shades of nailpaints? I believe it should.

Ps: We couldn’t capture many photographs as Rupali was unwell, but the father was kind enough to share with us few of their personal photographs from the family album.