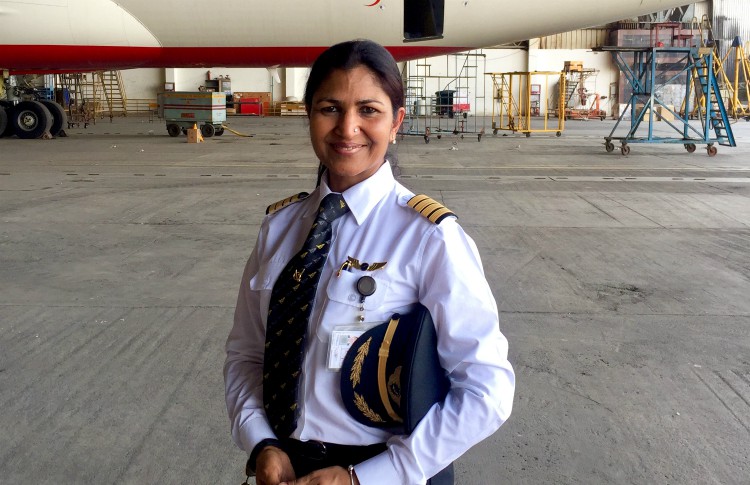 “Ladki ho, zyada udo mat!”– a typical taunt, that I am ready to bet, more or less every girl has heard at least once in their lifetime when they expressed the desire to do something that refuses to fit into society’s so-called ‘rules’ for them. But do you think that Nivedita Bhasin, the youngest woman pilot in world civil aviation history to command a commercial jet aircraft, too faced this partiality? Probably, yes. But did she let it deter her from becoming the living legend she is today? Definitely not!

A woman of many firsts, Nivedita was 26-year-old, married and mother of a one-year-old when she received her command on Boeing 737 in the year 1989, becoming the youngest woman in the world to captain a jet plane. Soon, she also succeeded in attaining the title of being India’s first woman check-pilot on Airbus A300 aircraft.

Nivedita as the youngest Woman Jet Commander in the World.

Well, her list of milestones she has achieved in her life is never-ending, so how about we begin our chat with the superwoman who believes in “listening to your heart before listening to others.”  Excerpts:

Tell me about the first time you flew an aircraft, the emotions you were experiencing, the thoughts flying around in your head.

This is going to take me back 40 years. It is very nostalgic, just to think about it. The year was 1979, and I had just turned 16. Ever since I can remember, I wanted to become an Airline Pilot. All through school, this was the dream I had nurtured. After trying my hand at Aeromodelling, I had enrolled at the Delhi Gliding Club, while I was still studying in class X. It involved months of hard work, studies, and preparations. We learned to work as a team, to be compassionate, patient, to respect the weather and the one most important lesson of life, to never be overconfident.

The final day of solo flying dawned unexpectedly and I found myself being led to the Single seater Intermediary Trainer Glider, the ITG-3, a few minutes before sunset on a balmy August evening. I approached the tiny Glider, with a purposeful stride and it was with silent confidence that I lowered myself into the cockpit. I thanked God for bringing me this far in my journey and knew that today would be the beginning of a life I had always dreamed of. I felt free like a bird. Liberated, strong and determined. I vowed that I would put in all efforts to achieve the goal I set my sights on. There was no turning back for me, no self-doubts, only a gentle affirmation that I would make this work for me.

The way you described that day, I can almost see it happening in front of me. So, after you officially became a pilot with the Indian Airlines in 1984 at the young age of 20, how did it feel like to wear a uniform for the first time?

For me, it signified power and feeling important. That was when I was young. Initially it was exciting and I had, and still have, an extreme sense of pride on wearing it. The uniform gave a totally different dimension to my perception.

It meant that along with position and power, came the dedication and responsibilities. In uniform, we are ambassadors of the Airline and all our actions, behavior, as well as performance, is under scrutiny and censure. Being the third woman Airline pilot in the country meant that we were the ones laying the ground for the hundreds of girls who, like us, would dream of flying.

So it was a regimented life, sometimes too harsh but also a way to prove to our colleagues and to the world that women could be a part of this male-dominated career.

And your efforts paid off! As we know, today India has the highest proportion of female commercial pilots in the world at 12%. But in the 1980s and 90s, this was not the scenario and as you said, it was a male-dominant career.

In the early 80s, we were a dismal minority. But at that time, I did not need role models, as my mother’s motivation showed me the way. The passion I had for turning my dreams into reality was limitless, so nothing stopped me from being a woman entering a male-dominated career.

Have you ever suffered any turbulence in your career because of the fact that you are a woman pilot?

Life was difficult when I first started as a Trainee Pilot in the Airline. There was a mixed bag of pilots, some strict and professional, yet compassionate, some welcoming and then there were a few who found it hard to handle women encroaching upon their domain. So, it was a situation where your guard was up constantly. There were times when women in the cockpit have had to ward off advances of a male Captain. And there were also times when this could not be reported for fear of a bad performance report later.

But these are isolated incidents and a job done sincerely and truthfully is always fulfilling. This is where I gain my strength from.

Looks like patriarchy has encroached upon the skies as well. Talking about patriarchy, have you ever felt that your passengers were being sexist when they saw that it was a woman flying the aircraft?

Of course, it was mostly like that in the beginning. I was based in Calcutta and women pilots were unheard of. Passengers were extremely wary of flying on a plane piloted by a woman, as for them it was out of the ordinary to even see a woman as an airline pilot. Also, there were isolated cases of passengers expressing their doubts about our ability, but these were deftly handled by our cabin crew who dispelled such thoughts with great panache.

Over a period of time, this has changed completely. Passengers are comfortable flying with us and greatly trust our competence and ability.

As we know, most of the members of your family, your two children and also your husband, are in the aviation industry. Did it ever happen that any of them were your co-pilots in the cockpit?

When I began my career, there was no one in my immediate or extended family, who was in Aviation. And after more than three decades, I find myself surrounded by Pilots. In fact, we are a family of Pilots. My husband and I started our Airline careers on the Turboprops, the Fokker Friendship, F27. He flew for Vayudoot and I, for Indian Airlines.

We had a common pool of Captains and one day it chanced that we were slotted to fly with the same Instructor for a check ride. Needless to say, we were very happy to be on the same plane and extremely proud to fly our license renewal flight together.

Your next generation has taken after you, Nivedita, you must feel so proud!

My children have literally grown up in the cockpit of every plane that I and my husband have flown. It’s been a couple of years that the children have upgraded as Captains and our very first flight with each of them was very special. It was a mixed feeling of pride, joy as well as trepidation, but overall it can be summed up as a sense of protectiveness. This is the moment that as a parent you have looked forward to, and from now on, you have to learn to let go.

This was a moment that we will cherish forever.

Coming back to your amazing accomplishments, what has been that one flight that you’ll always remember, the one that boosted your confidence as a professional pilot?

For this, I can definitely point to my initial training on the Boeing B737. After flying the Turboprops, it was a big jump to fly the Jets. This was in 1985. Two boys (my batch mates) and I were paired together for our training. It was the first time that I got to perform along with two boys. The instructor’s confidence in me and my performance on the plane was a definite morale booster that what they could do, I could too. From then on, it became a level playing field.

You proved that gender doesn’t play a role when it is talent that matters. What would be your message to all the women out there who want to set foot in such male-dominant careers but are hesitatant? How about sharing it as a flight announcement?!

“This is your Captain, Nivedita Bhasin speaking and I have a message for you. Listen to your heart before listening to others. With the three D’s you will soar to the greatest of heights. With dedication, determination, and discipline, you can achieve anything that you want to, provided you are really passionate about it. And lastly, do not forget to ask for help when you need it.  So go forth, make your dream a reality, like I did”.