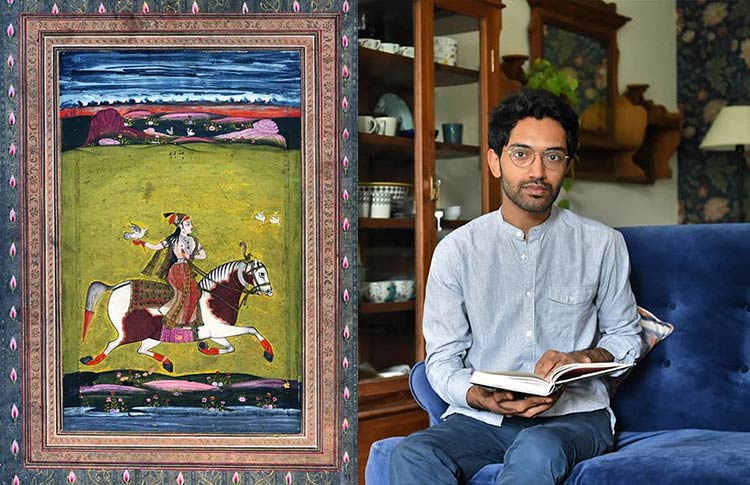 At the young age of 28, Manu S Pillai has achieved almost everything that every scholar of his age merely dreams of.

A PhD from King’s College London, an award-winning and critically acclaimed book, The Ivory Throne, to his credit and a panache at the language. You name it, Manu has it.

An avid historian, Manu through his books and research papers has been portraying history in an interactive way and lucid language that the millennials are finding engaging. It is not the historical periods but the people who lived in them that charm Manu.

If you go through Manu’s Instagram page you will find many historical narratives that will have you hooked at the first glance. Particularly interesting among these are the women’s stories.

“We have this image of Indian women as ghoonghat-wearing, docile creatures. Well, in Kerala as late as the 1920s, if you wore a blouse you were considered a jezebel. There are photographs of queens confidently gazing at the camera, seated with their sons and brothers—all of them uniformly topless,” Manu shares in an interaction with Vice.

“Whether you lived in the 15th century or in the 20th, while contexts change, human behaviour doesn’t really. People fought, loved, built things, destroyed things, had sex, judged each other, and paraded hypocrisy as we do today,” he adds.

These are exactly the nuances that Manu brings out through his narratives. Consider for instance the following paragraph from his writing on Chand Bibi:

“Chand Bibi was descended from a Marathi Brahmin called Bheiru. Where Prince Murad leading the attack was a drunk and drug addict, Chand Bibi had built up years of experience in government. She rode horses, scoffed at suggestions that she should be in purdah, spoke a reported 5 languages, painted as a pastime–and surprised the Mughals by bombarding them with gold and silver cannon balls (partly because she had run out of the real thing–but they didn’t know that).”

Notice the use of language. It’s lucid, colloquial yet polished and contemporary in an engaging manner.

Here are some more pieces of his writing:

Lakshmi Pillai of Arumana was the consort of that rajah who brought the tapioca to Kerala. Custom decreed that the #Travancore rajahs could never (openly) dine with their wives; under the matrilineal system, a rajah’s sons could not attend his funeral–only nephews could join; indeed rajahs didn’t even attend the weddings of their own daughters because they were prohibited from participating in private events. And since the wife and children were not royal under rules of matriliny, their affairs were technically “private”. A natural corollary was that as a rajah lay dying, he was surrounded not by his wife and offspring but by Brahmins (one of whom, for a massive reward, would embrace him to “assume his sins” so that the rajah’s chances of getting to heaven were at a maximum). In the case of Lakshmi Pillai, the last time she saw her husband was over a week before he died in 1885, of which it is recorded: “Ten days before death he sent for his Consort and children, and they came before him in the evening very late. He beckoned his daughters to approach close to the cot, and the light not being very bright, he bade his Consort trim the flickering lamp, in order to enable him to see his daughters well, and he gazed on them for a while and wept. His Consort and children also wept; but he told them that God would protect and help them, and asked them to take leave. His Consort, his son, and daughters prostrated themselves at his feet..and took their last farewell. On the same night his Consort and his eldest daughter took ill, being overcome with grief.” Interestingly, an astrologer had told this rajah that his son would die a pauper. And so instructions were left in all the oottupuras (Brahmin feeding houses) across south Kerala that if ever a non-Brahmin called Narayanan Tampi of Arumana, son of Lakshmi Pillai, came knocking, he should be served at once a hot, freshly cooked meal. (And, as it happens, one part of the mansion in which Lakshmi Pillai lived is today a different kind of feeding house–a high end restaurant called #VillaMaya .)

377 Likes, 43 Comments – Manu S Pillai (@waatcoconut) on Instagram: “Lakshmi Pillai of Arumana was the consort of that rajah who brought the tapioca to Kerala. Custom…”

Lakshmi Bayi of #Travancore. She was born in a town called Mavelikara in 1848 and at ten, adopted and installed as queen in Trivandrum. In the 1860s she commenced English lessons with Christian missionaries, who were most puzzled that she only received them before 8 o’clock in the morning i.e. *before* she had had her bath. That way, she could wash off the ritual pollution of having dealt with Europeans after her lessons. Though she cheerfully read the Bible, even in the 1880s they were upset that she still showed no desire to convert. Meanwhile Lakshmi Bayi’s husband (“the consort”) got embroiled in court intrigues (and evidently formed a taste for marijuana and the like–will put up another post on him) and was imprisoned for five years. Pressure was brought upon her to exercise her privileges under the matrilineal system, discard the “state prisoner” husband, and choose a new consort. She refused, however, and waited five years till her uncle, the maharajah, died and her husband was released. This so moved Queen Victoria (herself famously obsessed with fidelity) that she sent Lakshmi Bayi a special medal, and Lakshmi Bayi sent her a photograph in return. Anyway, in due course the rani died in 1901. Her husband wrote in his diary, “My angel, my life, my darling, my all and all, my pride, my idol, my sweetheart–alas! and what not–expired quietly at 8pm.” And that was that.

483 Likes, 25 Comments – Manu S Pillai (@waatcoconut) on Instagram: “Lakshmi Bayi of #Travancore. She was born in a town called Mavelikara in 1848 and at ten, adopted…”

Today’s cool hair person is Sethu Lakshmi Bayi, the last female maharajah of Travancore (and the protagonist of my first book). This picture was taken in 1913 when she turned 18 and succeeded to her ancestral estates and titles, which included the privilege of being the sole female figure to receive directly from every British viceroy a special kharita (Persian) that was ordinarily sent only to male rulers of Indian states. What made her special was that it was her ancestress in the matrilineal line who granted the English one of their earliest enclaves in India at Anjengo in the seventeenth century. This picture, where her hand rests on a copy of Debrett’s Peerage, was also sent out to Britain to the king and published in various colonial era books, papers, magazines etc. Sethu Lakshmi Bayi went on to exercise power in the 1920s and dealt with the likes of Gandhi and Tagore. She entertained Edda Mussolini at tea and presented a state sword to the first filmmaker in Kerala (besides providing police security to its Dalit actress). She was a good policy maker but a bad politician–eventually she was isolated by members of her own extended family, and lived decades unhappily in Travancore, before finally, after independence, leaving Kerala and settling in Bangalore. The 8 odd titles she held were discarded and she became simply ‘Smt’ Sethu Lakshmi Bayi. And from a woman who had a 21 gun salute every time she entered or left her capital and was once waited upon by 300 servants and ADCs, she died at 89 a ‘nobody’, cremated at the Wilson Garden crematorium in Bangalore, surrounded only by family. The irony was that she didn’t regret it–she saw royalty as an anachronism after 1947 and moved on from palace life to life as a commoner, free at last from the politics and intrigues that had marked most of her adult life when she was a queen.