Lawyer Mini Saxena On Breaking The Silence Around Consent, One Workshop At A Time 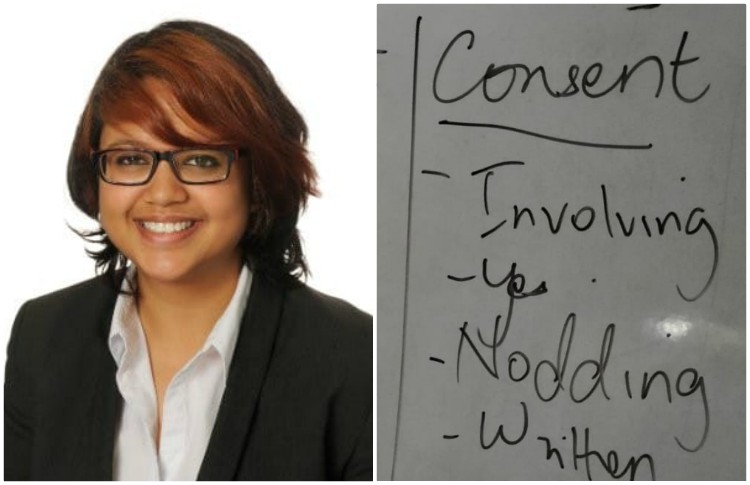 There’s no denying the fact that #MeToo movement has played a significant role in fostering dialogue and propelling action in matters of sexual harassment and assault, but what it has also done is that it has made you and I aware of how important ‘consent’ is. The spectrum of which is broad, as it addresses not just sexual but also non-sexual matters, and hence needs to be learnt about and discussed at length.

And to ‘break the silence around consent’, and create the necessary awareness, Delhi-based lawyer Mini Saxena has started what is called as ‘Consent Project India’. As a part of the initiative, she and the team conduct interactive workshops for school and college going students to make them understand the concept and the key statutory sexual offences, and also answer their legal questions with accuracy and experience.

It was three years ago when Mini was working at a law firm in London that she got to know about a criminal barrister’s initiative called ‘The Consent Project’. It was calling out for volunteers to do workshops in schools to teach students about consent and the law around it, and Mini decided to join them. “I used to do at least one workshop a month for the time I was in London, and since I had always wanted to start something like this in India, when I returned in April last year, I took permission from the founder and began right away,” shared Mini.

Here are some more excerpts from our conversation with Mini:

You brought the idea from London to India, tell us about the difference in approach and changes that you had to implement.

The workshop constitutes of two parts – it starts off with explaining how consent works, and then goes to the legal aspect, and though interactive throughout, towards the end we discuss about the options that an individual who has faced sexual assault has in terms of both legal and non-legal recourse. So yes, I did have to tailor the content given the difference in both the legal system as well as the nature of issues, and a lot of research went into it. The difference in the issues surfaced gradually, for instance, based on the experiences shared by children of age 11-14 years, I understood that the statistics of abuse by family/neighbours are too high in India as compared to the UK.

In your experience so far, what do you see as the primary hurdles that challenge the understanding of the concept of ‘consent’ in Indian context?

The importance of consent has not been culturally ingrained in our country, be it in sexual matters or non sexual. And since community and family have always come above ‘individuality’, it is a rather new concept for people to understand that one’s autonomy ought to be respected. In the workshop, we discuss about the topic of ‘good and bad response’.

Also, when a sufferer opens up about their experience to someone, the response should never be on the lines of what dress they wore or what time they were out – it needs to be understood that regardless of what the conditions were, fault is always of the perpetrator; as also a forceful suggestion to file a police report or to share about it to her parents without her accordance, too, makes it case of violation of her consent. So, there are misconceptions and lack of knowledge, but we are moving ahead gradually.

You talked about one part of the workshop being around the legal aspects, would you shed some light for us on the same?

In the case of a sexual assault, the legal route is to first file an FIR, which, technically, is then to be followed by investigation and trial. We make it a part of the discussion and try to clarify as much. The little details such as that the FIR can be filed by anyone, under law the police is obliged to file in any circumstances, and that a lawyer doesn’t have to necessarily be consulted. We also discuss the importance and need for being as clear and consistent with the details of the incident, to not leave any loopholes, and to not shy away from using the ‘right terms’.

The Indian legal system fails to support the cases of marital rape.

We haven’t had any workshops with married women yet, and the domestic violence act is the only law support so far. However, at this stage the primary objective of our workshops is to create and foster dialogue around the concept of consent, and explore the options of what and what not to do, not on how to resort to law.

Sex education is yet to fall out of the list of taboos for our society, but it must hold an important part in the ‘consent’ dialogue?

Sex Education and Consent Education are two parallel teachings yet go hand in hand, but the domain of consent becomes much larger as it also involves matters pertaining to non-sexual context. Until a few years ago, or even today, the most basic of biology lessons were not being talked about in schools and homes, and it really was a hindrance.

So the need of comprehensive sex education being catered now is an important step, however, a lot needs to be talked about when it comes to consent. From something as small as parents going through their children’s stuff without asking, to school authorities putting out marks of students on a common board, all falls under breach of consent.

Talk to us a little about the grey areas surrounding ‘consent’.

The first thing to happen in a discomforting sexual encounter is the setting in of the realization that the individual feels but in their head, and the second part is for the person to be able to voice that discomfort or non-consent, which is often not easy due to socialization and the lack of dialog around consent. Law considers two attributes – the act, and the mental element (i.e. the intention or knowledge) for any crime. However if it is a sexual offence, the mental element is considered only that of the woman and not of the man, unlike in the UK where it is required of both. Therefore technically as long as the woman testifies that it was nonconsensual, she is to be believed. We don’t hug someone without seeking his or her comfort and permission, so similarly any flag of discomfort in a sexual encounter is enough reason to put a stop to it..

Indeed. But sadly it all turns to victim blaming, and that only clouds the importance of consent.

It certainly does. Victim blaming comes from a place where women are only seen in one of the two categories. If you are a “good woman”, nothing will happen to you, and if you are a “bad woman”, whatever happens to you is your fault. And clearly, from the way it is perceived and everything that has been said about women wearing short clothes and staying out till late in the night is them inviting rape, takes us far from the issue and problem at hand.

It must be worse for sex workers, since the common perception would be that since they are paid for, it makes the question of ‘consent’ invalid?

And for the queer community, do your workshops address the importance of consent in non-binary relationships, too?

What we’ve tried to do with the workshop content is that not necessarily try to carve out the relationships, and so we don’t treat the non-binary different from binary, or see them as “special cases”. It is in the activity/interaction phase of the workshop, that we focus on normalizing it without making it sound different.

Like we’d describe a scenario of inappropriate touching, and talk about different cases involving a man and a woman, two men, or two women, and by giving the different variables make it clear that irrespective of the gender of the two people involved, touching or doing anything without the consent of the other person is a case of non consent.

And lastly, if you could elaborate for us on how ‘consent’ lies at the very foundation of the ‘Me Too Movement’?

All the cases of #MeToo make it clear that it starts with the violation of consent, and that it is happening on a routine basis. And just as the dialogue around it is evolving, so is my/our approach to understanding and explaining the spectrum of consent, and the grey areas surrounding it.