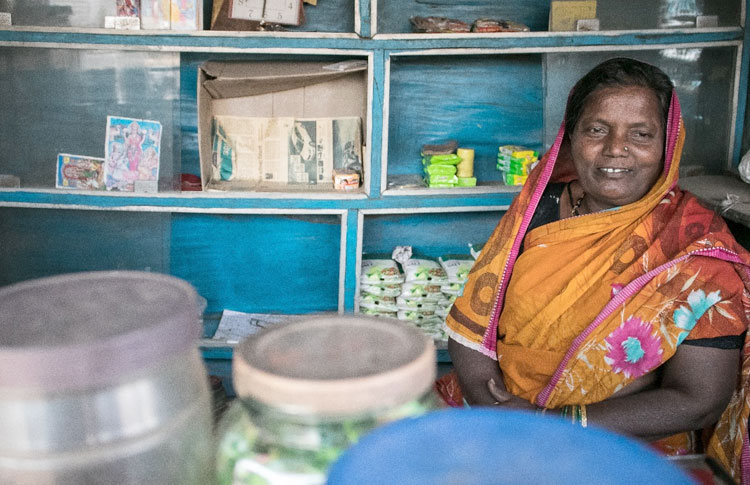 In Tilwani Village of Maharashtra’s Kolhapur district, the name Lata Jadhav is a source of never-ending inspiration for women. She is the first woman in her village to start her grocery shop. Add to that the fact that she is 60, and had led a tough life as a victim of patriarchy and domestic violence and even attempted suicide twice!

Raised by a single mother who had 6 more kids to provide for, Lata wasn’t able to complete her education beyond grade X as she was married off to Balaso Jadhav, who worked both as a farmer and an agricultural laborer. In the eight years that followed, she worked as an agricultural laborer in her father-in-law’s field without any pay. “My father-in-law would keep saying that he had to pay for the damage caused [to the villagers] by my alcoholic husband,” she shared.

“Every day my husband would beat me with every possible thing [sickle, stick] he could find. He didn’t like my habit of reading books. He broke my glasses thrice so that I couldn’t read the books. After I started the grocery shop, he would come here and pull my hair dragging me outside the shop. This was followed by the swearing and bad mouthing. Everyone in the community saw this violence, but no one tried helping me. At times, I used to lock myself up in the shop for safety. He used to take paan masala from the shop every day and would steal even the bare minimum I earned,” she said.

No one came forward to help her as community members found it unnecessary to interfere in someone else’s family issues. Even the Panchayat denied to help her when Lata approached them. Her husband married thrice. “After I was married to him, a few women told me about his first wife who had left within a few months of the marriage,” she said.

Even when Lata left him, he tricked her into returning to the village within two years but the same things happened again. It was then that she decided to commit suicide.

Her first attempt was in the late 70s when she tried to jump in a well which was more than 60 feet deep. “The community members were aware of the violence I faced every day. Two women from the community knew my intentions, and they immediately pulled me back even before I could jump into the well,” she remembered. “They took me to the house, made me drink water and consoled me.”

Sometime later she made another attempt to end her life. “I couldn’t bear the violence anymore. I jumped in the nearby lake and was about to drown. My son [three and a half years old at the time] saw this and ran to my husband. Somehow, he managed to save me,” she said.

As Lata’s son grew older, he started supporting her and set up a cycle repairing shop in the central part of the village but also started selling country liquor, which Lata detested. In the late 90s, she decided to start her grocery shop and also shifted her son to agriculture. Though her husband tremendously resisted her decision, he soon realized that Lata was dead set on being independent.

“I haven’t faced any problems in this business because everyone knows my struggle. All the suppliers and the villagers respect me a lot today,” she said.

Life is still hectic for Lata who wakes up at 6 am to milk the cows and buffaloes and collect the dung, then goes to the grocery shop, where she works until 1 pm and resumes from 6 pm until 9.30 pm, every day.

“Now, everyone in the village respects me. The supply side in this grocery business is male-dominated, and I want all the women to fight for their rights, for their freedom,” said Lata who is also a confident farmer looking after her half an acre of agricultural land in Sajani village.