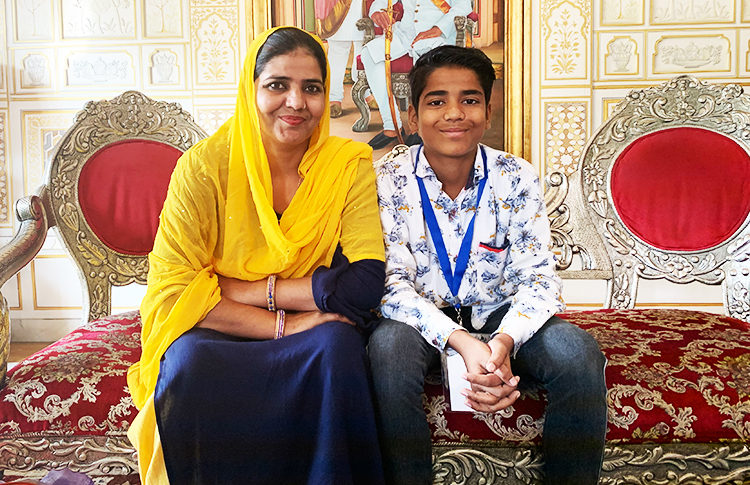 45-year-old Khatoon Begum has set an example for those distressed women who’re caged behind the absurd rules of the religious patriarchy. A few years ago, something in her personal life propelled Khatoon so much that instead of staying silenced, she began working towards reclaiming her lost voice in the family as well as in the society.

During IWB’s conversation with Khatoon at Woman Up! Summit, she said, “After marriage, I was strictly asked to wear only Burkha and stay inside the house all day long. I wasn’t allowed to meet anyone or go anywhere. In fact, sitting in the balcony and enjoying the blue sky as an occasional break was forbidden, too. It was only in my husband’s company that I could go out and see what was happening outside in the world. It was very suffocating, especially as a new bride.”

However, as years passed by and she came to a realization that she had had enough, Khatoon requested her husband to find her a job. Of course, to snatch her freedom back, she had to fight a lot of resistance by breaking through the walls of the societal pressure. She shared, “During this time, our financial situation went miserably low which somehow triggered my desire to work and earn money to make the ends meet. The first job that I found paid me a mere Rs. 2,500 per month. Meanwhile, to keep things harmonious at home, I spent a lot of time explaining to my family the benefits of being a working woman. I told them how I could finally use my education, improve the crumbling bank balance, and also set an example for my growing son, but sadly, none of that worked and they kept doubting my intentions.”

Armed with a degree of Bachelors of Arts, she eventually became a part of Swayam Sahayata Group (a self-help group) that conducted soft skill development classes for distressed women and also helped them grab upgraded job opportunities. Khatoon learned quilt-making here and began taking orders to customise winter home furnishings for clients around the city as an extra income.

As she progressed under the guidance of the right mentors, Khatoon could pay off a huge loan of Rs. 5 lac that her husband had take a few years ago to invest in his small business. “The dearth of money that our family had been enduring for so long even made my husband want to try committing suicide. Thankfully, when I took charge of the situation, we managed to repay the debts in a span of 1.5 years, something that would have probably taken forever provided I had never manifested the courage from within. My family now understand the power of a woman’s determination and the importance of her independence,” remarked Khatoon.

Khatoon’s willpower has not only helped her family get over the financial crunch but also inspired other women from her community to stand up for themselves and believe in their potential. “Apart from the quilt-making, we’ve also collectively started a tiffin service wherein we provide home cooked meals to corporates, etc. This group is known as the Kiran Bachat Samuh,” she added with a smile on her face.

After three years of continuous opposition from everyone around her, today, Khatoon is everyone’s favourite in the colony. She is looked up to by both fellow women and their children. “I’m proud of myself that I didn’t let any patriarchal rule exploit me. I’m my own heroine,” she signed off.

IWB requests our readers to closely look around and find women like Khatoon who’re bringing positive changes in the society in their own little space. We’d love to meet these change agents and narrate their stories to the world.