‘Kamali’ Is A Story About What Happens When You Allow A Young Girl To Pursue Her Dreams: Sasha Rainbow 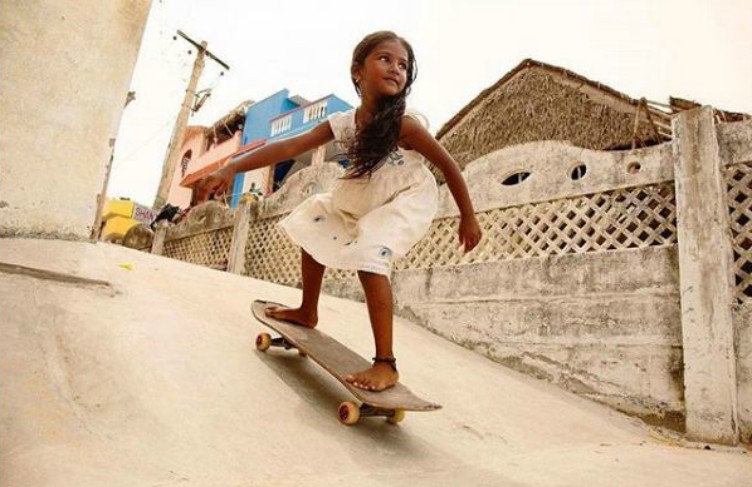 Update: ‘Kamali’ is being distributed by RYOT Films in partnership with HuffPost, and has been exclusively released on HuffPost India on 20 October.

When filmmaker Sasha Rainbow first saw a picture of nine-year-old Kamali dressed in a simple cotton frock, skating through the indiscreet lanes of Mahabalipuram, she surely mustn’t have thought that a film made on her life will make it to the Academy Awards shortlist one day.

For a filmmaker, the first meeting with the subject of their film decides a lot about the entire tone of the movie. As for Sasha, it turned out to be something even more powerful. She was in India to shoot the overall movement of women skateboarding in the country when a chance meeting with Kamali and her mother Suganthi changed it all, including the course of her film.

Recollecting her first meeting with Kamali and her mother, Sasha shared in a recent interaction with IWB, “In the beginning, it was a lot more of the older girls that I was interviewing. It was interesting but I didn’t know where everything was going to lead me. I had seen a picture of Kamali and was really really pushing her to come down to Bangalore and be a part of this music video that I was filming.”

“We booked a car for them and it drove them all the way to Bangalore. By the time they reached, it was night time and we were really tired, it had been a long and exhausting day and our energy was really, really low. We were waiting for them in this big skate park.”

The instant Kamali arrived at the park with her mom, she was hooked. Sasha recollects, “You know when a child sees their idol and looks at them with pure reverence? Kamali looked at the skate park in the same way and her eyes just lit up. She had no shoes on, she was holding a skateboard which was almost the same size as her and she was smiling from ear to ear.”

There was something about Kamali and the way that she held on to her skateboard that was surreal. That simple moment transformed the energy of the entire film crew. That skate park was the biggest one that she had ever been to and the instant she got on to the skateboard, Sasha knew that her film had found a direction.

“We picked up the camera and started filming her. She was so engaged with the skatepark that she didn’t even care about the camera,” says Sasha.

She adds, “For the next few days, Kamali and her mother lived with us. We didn’t have much of a budget and thus had to stay together which helped us in so many ways. We really got to know them, what a beautiful girl Kamali is, and what a beautiful spirit she has. I also got talking to Suganthi and she told us about how her family didn’t support the fact that she was letting Kamali skateboard. She talked about her lack of education and how she had wished to become a lawyer and she wished she could have finished school but she couldn’t afford it and thus had to leave school.”

Suganthi told them that all her dreams were now about seeing her children make it big in life. “She told me that she wanted to see Kamali doing everything that she couldn’t. And by the end of that conversation, I was in tears and I knew that I had to come back to India and really tell this story which is much bigger than skateboarding. It’s about what we can do to break this cross-generation cycle of poverty and abuse and how even just one person can make a big change,” says Sasha.

That’s how the idea of the film Kamali was conceived. The film recently had its US premiere at the Atlanta Film Festival, where it won the award for the Best Short Documentary. To the filmmaker’s great joy, the film has also qualified for the 2020 Academy awards.

Clearly, Kamali is a film unlike any other. While it tells the story of the hopes and dreams of a little girl skateboarder from Mahabalipuram, there’s something about it that’s speaking to people across the world.

Sasha explains, “See, Kamali is a story about what happens when you allow a young girl to pursue her dreams, her interests, her goals but more importantly it is a story about what happens when you let girls play. I think what’s interesting about skateboarding is that it’s a symbol of not only girls succeeding through strength but it’s about girls succeeding through failure. To become a skateboarder, you need to fall down again and again and that completely dispels the idea that to succeed you must always do well. In fact, you need to fall for a long time until you get good. Kamali reaffirms hope in people that despite all the failures, they can get a hold on their lives and make a real change in the world.”

While this is a film about Kamali, it also is a film about a mother’s strength. “Its really about the two of them learning to grow on their own and also together. I think Suganthi supporting her daughter is one thing but Suganthi being inspired by her daughter to take her life in her own hands is the dimension that we need to look at.”

A single mother, Suganthi has been supporting the entire family by herself. She earns money from a lemonade stall on the beach to put her children through the school, investing all her time and life just to put food in their stomach and give them a good life.

Going to Bangalore was, in fact, the first time that Kamali and her mother set out of Mahabalipuram and while it was a humbling experience to look at their joyous and excited faces for Sasha, there was also something else that she learned from the observation.

She shares, “I think Suganthi is a very intelligent mother. As the two went out exploring the world, while she was excited, she was also vigilant and constantly ensured that Kamali is not being overwhelmed by the experience and is still a child at heart.”

Now that the movie has created waves internationally, a part of Sasha’s work is done. She is, however, ensuring that the story of Kamali doesn’t end just here with the end of the film. She shares, “I am talking to some people about funding a big skate park in Mahabalipuram because if Kamali needs to make progress in skateboarding, she’ll need a space where she can practise.”

Sasha’s vision here is simple; while she wants Kamali to grow, she also wants her to teach the skill to other girls around her and trigger the kind of change that has transformed her own life.