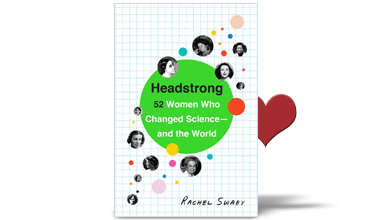 Journalist Swaby spotlights the accomplishments of 52 female scientists throughout history.

Inspired by the tone-deaf New York Times obituary for Yvonne Brill, which honored the rocket scientist’s beef stroganoff before her professional accomplishments, Swaby celebrates barrier-breaking titans such as Helen Taussig, the first female president of the American Heart Association; astronaut Sally Ride; and biochemist Dorothy Crowfoot Hodgkin, who inspired the newspaper headline “Nobel Prize for British Wife.” Ada Lovelace and Grace Hopper receive praise for their contributions to computer programming, while Jeanne Villepreux-Power and Stephanie Kwolek are praised for inventing the aquarium and Kevlar, respectively.

As girls in science look around for role models, they shouldn’t have to dig around to find them. By treating women in science like scientists instead of anomalies or wives who moonlight in the lab, we can accelerate the growth of an entire new generation of chemists, archaeologists, and cardiologists while also revealing a whole hidden history of the world.