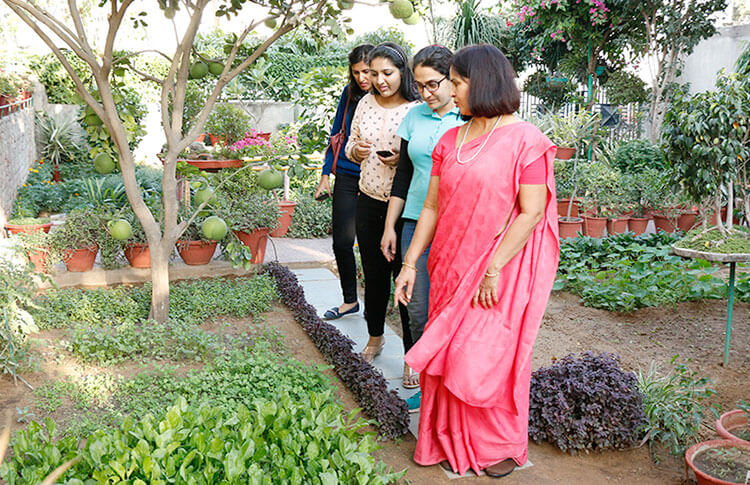 Guess what? I just lived an incredible dream: most of us don’t even know of the existence of this dream. A dream of being cradled by nature! Do you sense that I’m slipping into poetry mode? Trust me, I am. And all of it, thanks to Neeta Upadhyay of Orion Greens & Orion Club.

When we entered her home, we were expecting to see a beautiful garden, but saw a fairyland instead! You might think I’m exaggerating, but I’m not. Neeta ji was going to teach us how to make a ‘Fairy Garden’ and a ‘Terrarium Garden.’

But, first, it was time to call dibs on the beautiful ceramic tub. Lavanya, Jayati and I were thrilled. But, I think a little extra for me. I was already beginning to plan the objects that I was going to mark as my territory (not that territory!).

Neeta ji then assigned a task to Jayati and me together. We were supposed to cover the ceramic tub’s first layer with brick-gravel.

Meanwhile, in Lavanya’s land, she found the fascination of just being in a garden.

“I think I just want to dive into gardens like Uncle Scrooge!”

Jayati and I hadn’t realized, but we were constantly in competition. Each of us was trying to prove to Neeta ji that one was better at gardening than the other. Yes, we were pressing soil on top of the first layer and continued until it reached a certain height.

Lavanya was lucky that she’d gotten a separate terrarium garden to prepare for herself. When she wasn’t looking at me, I secretly showed her my tongue. Then, I noticed that Jayati wasn’t looking either, so I repeated the same.

Lovy started the first layer of her terrarium garden with lots of colorful pebbles. The second layer comprised of mosses.

After many fights, Jayati and I finished all the layers of the fairy garden and waited for Neeta ji’s assessment. Um, yeah, she liked Jayati’s work better, but.. um.. whatever. (Just kidding, read on to see how I seek revenge on her).

Neeta ji dug in some soil to insert plants inside the fairyland. Jayati and I offered to help her (yes, we had many intentions of competitiveness). Lavanya stared at us from a distance giving us the stink eye.

And suddenly, Jayati & I were friends again. We decided that the fairyland was for all of us, while Lovy would rule the Terrarium land.

“Do you want me to hug you with my dirty hands, Jayati?”

Lavanya’s Terrarium Garden was all prepared. And Jayati and I started compiling the other ingredients of the Fairy Land.

While I was sincerely working, Jayati was ‘having some fun.’

After we had planted the house inside the fairyland, Lavanya had a realization, “I’ve always wanted to live in a house like this. It’s really the dream. Imagine if there was a pond around?”

“Let me help you with that!” Neeta ji added. She brought out a blue polyethylene to turn it into a pond.

We all continued to look at her to see how she’d turn it into a pond. Neeta ji dug out some soil and prepared a puddle, where the water would sit.

Jayati and I were given a task. We had to cover the sides of the pond with pebbles. Neeta ji later accepted that my pebbles were more rightly placed than hers.

Now, once our Fairy Land was prepared, with a pretty bench, some water in the pond, a tiny house, only one thing was missing.

We placed two! One sat on the house, and the other, around the pond. This was the moment I wanted my dad to be the ‘Honey’ who had shrunk his kids.

Ah, imagine living in that setup. At least, I get to look at it every day. *Wink*

And, this is what the terrarium garden looked like!

Neeta ji assured all of us that we’d get a walk through a real fairyland, too. We couldn’t wait to see her garden.

…moving on from Lovy’s misery. We think we left a part of our souls back in Neeta ji’s fairy land.

Do you want to learn gardening, too? Or make your own Bonsai plants? You can get in touch with Neeta Upadhyay here.