Instead Of Lecturing Your Child Into Becoming Good, Be A Kind Soul Yourself: Aparna Joshi 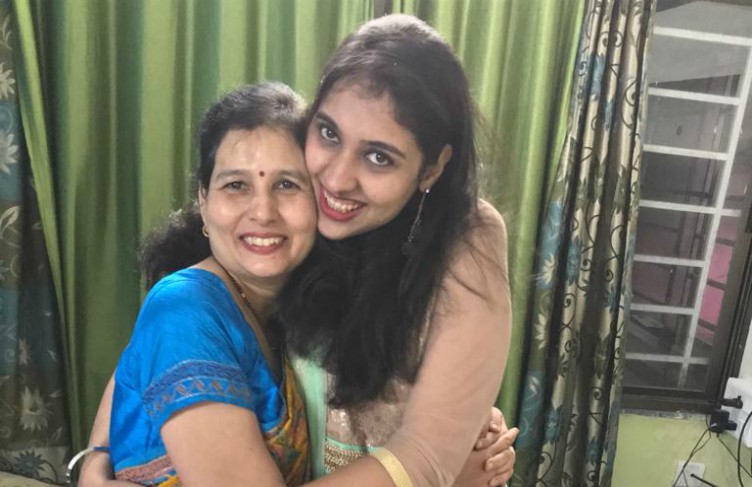 “A generation gap will only happen if you create one. I have learned to be both – a mother and a friend to my daughter. I never wanted to live by the cliche definition of a mother- strict but loving. I wanted to be her friend, her constant support, someone she can turn to when she wants to. Restricting her because she is a girl or because I am a parent which somehow means I can make decisions for her never crossed my mind,” said Aparna Joshi.

Living in Bhopal, Aparna, 50, has forever believed in debunking the myth of generation gap between parents and their children. Angha, 25, Aparna’s daughter, whom she lovingly calls Tannu, is currently residing in Mumbai and working as an assistant casting director in Mukesh Chhabra’s casting company. “Lecturing your kid to become a better person won’t have any result, instead be what you want your kid to be – a good human being, they see and learn,” Aparna shared.

Celebrating this bond of every mother and daughter, Indian Women Blog has collaborated with the unique online gift store, BIGSMALL.in for our campaign So Mamma Says. Under our campaign, we will be talking to three awesome mommies, who will also write notes, which can be mushy messages or free advice, and choose quirky gifts for their daughters which will be interchanged between the girls.

Excerpts from our chat with Aparna:

While Tannu must be giving you amazing gifts today, what parents cherish the most is their efforts before they are earning on their own. Is there any such gift that you cherish the most?

Tannu loves celebrating my birthday. So, when she was four, she had made a card for me, it was so beautiful! She had drawn for me, colored it, stuck stickers on it- she did everything her childish brain could make sense of. I have that card till date, all packed and protected- my baby’s first gift to me.

Aw! How cute. You seem to have great memories of her childhood, any funny story that you would like to share with our readers?

Arre! She was so mischevious! You see, she loved to play outside, though I never tried to censor her play time or whether she should go outside or not, I just wanted her to have some rest-time too. So, I would lock the front door in hopes that would deter her from going but no, she would go out the windows, into our neighbour’s house and get out from there to play outside. And she had this never-ceasing energy when it came to playing, the kids playing with her would tire, but not her.

Young Angha with her mother

As you know, there are countless lakes in Bhopal, and this maha-shaitaan girl of mine, collected the kids from our neighborhood as well and took them to a nearby lake with her! The other parents never allowed their kids to go there and even the kids were scared of venturing in that area. So, the parents came to me later, telling me how she had taken them with her and was now sitting with them on a rock in the middle of the river.

Boy! She was one unique kid. Sounds rather adventurous to me. So have you ever been a part of her many adventures?

Paragliding in Goa. Initially, I was very apprehensive and scared, but she motivated me and assured that if it was risky she wouldn’t have been doing it. She is fearless, to state the obvious, but I did it and oh God! It was amazing, in fact, I was feeling so exhilarated that I wanted to do it all over again.

So, she basically taught you to embrace your fear. Any other quality that you admire in your daughter?

Patience. I have never seen her getting angry, no matter how much the person in front of her is trying to rile her up, if she doesn’t want to react, she’ll not. When she does this, I am like, “Yaar, mujhe bhi sikha de thoda patience.” Seriously, she is an inspiration when it comes to not losing her cool.

While I’ll probably end up taking lessons from Tannu in the how-to-be-patient department, you stay tuned to read the emotional-quirky-funny messages from the mommies and know what amazing gifts they choose for the girls!