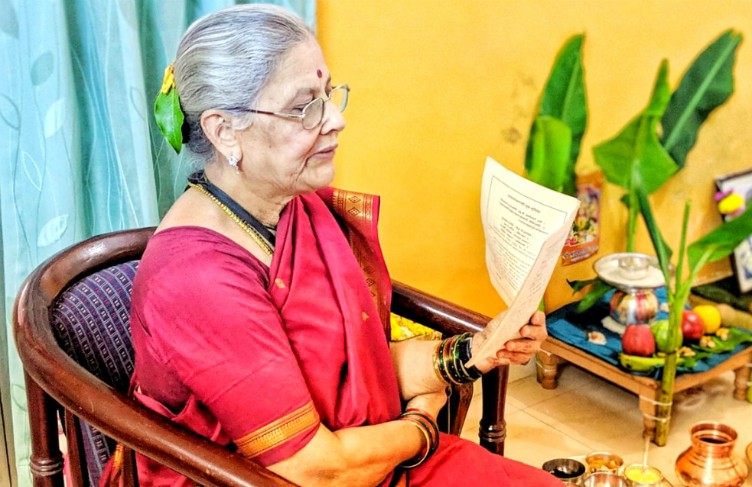 Chitra Chandrachaud was left smitten when she first read “Gargi Ajun Jeevat Ahe” in 1997, a Marathi book with a female lead who subverts the common assumption about women being scared of death by performing last rites in Varanasi.

She was so inspired by the plot that she ended up enrolling for a course at Jnana Prabhodini. An ambitious woman, Chandrachud didn’t just have the desire to make a career in a predominantly male territory but also aimed to change its outdated systems. Her dream was to become a priestess who performs all rituals, right from wedding to last rites.

“But first, I asked my father-in-law about this. I was married and was 52 years old then. I had certain responsibilities in the house and being a priestess would have taken a lot of my time. All he asked me was if I will be too scared to take the leap at my age. When he and my family saw my convictions they all supported me,” Chandrachud Shared in a recent interaction with The Better India.

Soon enough she became one of the four people at Jnana Prabodhini who performed last rites. Till date, she is the only woman in the group.

“[Our methods] are a tad different to the traditional ways of performing rituals. Traditionally, priests who perform auspicious rituals, like pujas, are not supposed to perform last rites and vice versa. But I perform everything, right from the naming ceremony to the last rites. We have come miles away from the superstitions!” she shares.

To elaborate on how people react to the idea of a priestess, Chandrachud shares a funny anecdote, “I went to a house to perform puja once. The family knew I was from Jnana Prabodhini, but that’s all they knew. When I entered, they asked me if Guruji is going to be late and why he didn’t come with me.”

She adds, “This has happened a couple of times, and I am not surprised because somewhere, the thought of a guruji or a priest always projects the picture of a man. But whenever they ask me this, I introduce myself as the one performing the rituals and always get welcomed by the families.

Chandrachud has a problem with how women are always given the back seat when it comes to rituals, be it performing them or being a part of them. She dreams of changing this sexism one ritual at a time like she did in a recent wedding.

She shares, “The fathers of both the bride and groom had passed away. In such a case, the widowed mothers traditionally don’t conduct the ceremonies. But if widowers in India can, why not the widows? So, I asked the mothers to sit with their respective child and perform the ceremony—from the beginning to the end! This happened just last week.”

No wonder, Chandrachud is famous across Maharashtra for her unique methods of performing the rituals. Her fame can be ascertained from the fact that she was asked to perform puja at actor Vikram Gokhale’s house a few years ago.

“And since he saw me conduct the puja, he has been booking an appointment every year! I had been so nervous the first time, but I’m comfortable now,” she shares.