Here’s A Sneak Peek Into Raksha Bharadia’s Witty Take At ‘Chaos’ In Romance, Sexuality And Fidelity 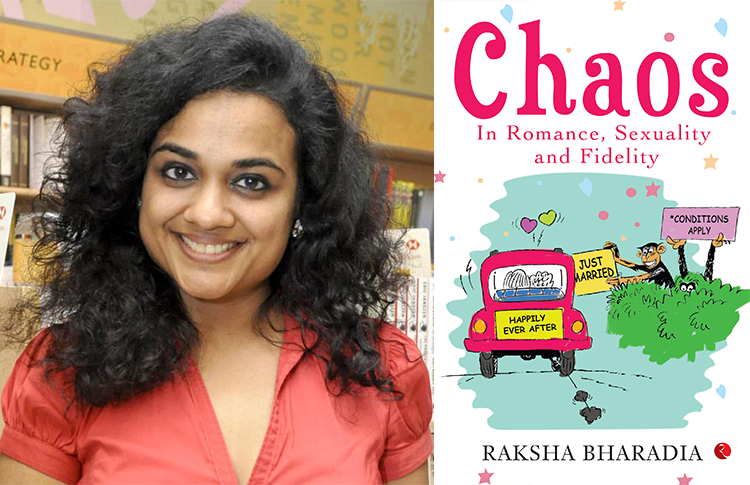 Editor of 13 titles of the highly acclaimed and globally loved Chicken Soup series, Raksha Bharadia is an author and a creative writing professional, but it is her ability to wrap intelligent humor in crisp wise writing that made us ardent admirers of her works.

A homemaker-turned-writer, Raksha teaches creative writing, and is also the founder of an online portal for Indian couples, called Bonobology. Unique as its name, the portal has special forums on marital matters, and also offers access to professional marriage counselors! IWB shares a long acquaintance with Raksha, and her recently published book ‘Chaos: In Romance Sexuality And Fidelity’ not only refreshed the memories of our last conversation, but also had us laughing (out loud) and contemplating (deeply) at the same time.

‘Chaos’ seeks to understand the little equations that go to make up a long-term relationship, throwing light on the steps that, if not well managed, lead to chaos for both partners. In the author’s words, “most urban couples today experience some amount of chaos in their interpersonal relationships—whether it be in the struggle to keep the erotic spark alive, trying to balance between the need for intimacy and personal space, or in handling the new-age demon called boredom! Long-established patterns of married life are breaking down in a new India where gender equality and individualism have blurred the domestic division of labour and leadership, often resulting in ego clashes between partners. Old rules of couple relationship—both explicit and implicit—do not fit well anymore; new rules are still not in place.”

Some of the questions that the book addresses are: Why do we feel the need to guard our partner’s sexuality? Why does boredom set in, in most long-term relationships? Why do affairs begin and is it really about sex or love at all? And many more such, that deal with the nitty-gritty of day-to-day sharing of the physical, emotional and sexual space between couples.

Give Chaos a read, and if you need to learn more before you place the order, here’s an interesting excerpt from the book to clear any sustaining doubts. Read on:

The great gender issue, getting graver by the day

In the book, The Normal Chaos of Love, Elisabeth Beck-Gernsheim and Ulrich Beck say:

The issues dividing men and women are not only what they seem to be, i.e. issues dividing the sexes. They are rather private signs of the crumbling of a whole social framework… In that respect industrial society is dependent on the unequal roles of men and women. On the other hand these inequalities contradict modern thinking and give rise to more and more controversy as time goes on. The more equal men and women actually become, the shakier the foundations of the family (marriage, parenthood, sexuality) seem.

When it comes to gender inequality, we know, everyone knows, that as a country, India fares rather miserably.

This doesn’t speak well about our treatment of women, does it? And not just in the social structure but also when we break it down to our more personal relationships as well. Whether it’s the adoring grandmother in whose eyes you can do no wrong, the ever-sacrificing mother who puts you on a pedestal, the sister who has been taught from birth to look to you as her protector or the wife who is expected to cater to your every need, women seem to exist only in the fringes of all their important relationships, without any identity of their own. And nowhere is this uneven balance in the man-woman relationship more apparent than in a marriage.

And then there’s the modern woman. The well-educated woman who has been taught to stand on her own two feet; who has been encouraged to follow her heart and chase her dreams; who has been told that she can do/be anything she wants to. The problem is the men missed the memo and are now clueless how to walk alongside their partners in harmony. As Dr Pratima Bhatacharya says, ‘It is a gender issue… We want to get our daughters married and get equal status, but we are not teaching the men to give equal status to the women—if the brother comes home from work we ask the sister to make tea or coffee. If the sister comes home from work, do we ask the brother to make tea or coffee? There is a problem in raising kids itself.’

‘Though the mothers today try and give equal opportunities to their daughters there is no corresponding growth between fathers and sons. Their father did not speak to them about gender equality and neither did their grandfathers to their fathers. Hence, there is a gender lag,’ says Professor Jani. ‘And the moment a progressive girl enters a marriage, she somehow finds herself in a patriarchal system which causes a lot of conflict because it is so different from the environment she grew up in. Today we have two distinct kinds of romances, the pre-marital and the post-marital. The conflict comes in the post-marital because of this cultural lag!’

So the problem starts with the upbringing itself. Move a few steps into the marriage scenario and the issues just get more complicated. The fact is that the shell of marriage has changed breathtakingly in the post-liberation era, yet, the soul of marriage—its dream, ideal, ethics and rules—hasn’t necessarily evolved to keep up.

Marriage counselling is at an all-time high, and conversations with those in this profession reveal a worrisome picture. Dr Rima Mukherjee does not mince her words when she states that men ‘are a very, very confused lot. They continue to be brought up in a very pampered manner, and almost every family is still very patriarchal. We hardly come across a family or a boy child who has been told that if, in today’s world where we are talking about equality, the boy has a working wife, then he should be self-sufficient at home and help his wife with the chores. Instead, the mother still continues to pamper the male child and the mother-in-law still believes that even if the wife is working, it cannot interfere with her household duties.’

‘By and large’, Dr Mukherjee continues, ‘men still have not evolved to the extent where they are able to handle a progressive woman with very liberated views. And there also are huge double standards: What is sauce for the goose is not sauce for the gander. It is okay if he does certain things—if he has a lot of girlfriends, or if he wants to go on a night-out with buddies (even if they are male buddies), and if he returns home at two in the morning, then this is not supposed to be considered wrong by the wife. But she cannot do the same.’ Continuing with her thoughts, Dr Mukherjee observes, ‘On both sides, the expectations have increased. Theoretically, men are happy getting married to working women but they are not able to handle the consequences. For example, they are not able to handle the fact that the wife is not like their mother who was a housewife—always present to provide him everything, give time to children, manage the house nicely so it looks good, etc.’

She does state that men who have grown up seeing their mothers go to work are far more used to independent women and may even be self-sufficient in several household areas.

The confusion that men seem to face is not an isolated theory. There is also a feeling of helplessness, or rather, cluelessness when it comes to this radical notion of treating women as their equals and that could stem from the fact that it is an alien concept to them; they have never seen it being practised in front of their own eyes.

‘Many times I have seen that the husband is clueless to the emotional pain which the woman has.’ Dr Neeru Kanwar adds, ‘Men are going through a crisis which they are not being able to resolve—he feels that his role was of a provider but now that role is also not needed as the wife is providing for herself. His role was of a protector, but now he may not be that macho that he is able to protect. And his role was to be the sexually aggressive one, now that also is not needed—so then what is his role? So men are not being able to resolve these crises.’

So what happens when men feel as if they are being bombarded by the ‘emotional inconsistencies’ of the women in their lives? When they can’t take the ‘constant cribbing’ anymore? When they feel as if their traditional roles have been squashed to a mere shadow of what they were used to? The answer is often not palatable. They turn to another. Adultery is on the rise. And to be fair, it’s not just the men. Women, too, often feeling an emotional disconnect from their men, turn to other arms for comfort. Dr Priya confirms, ‘Earlier the men were doing it and they felt it was accepted, however, today the women are also doing it and the issue is the same—they feel that they have been taken for granted; that they have not been appreciated; that they have no identity.’ What is the resolution? The solution? How do men and women reduce the gender lag and get on the same page?

To begin with, we have to first and foremost step out from the compulsion of seeing the relationship either as all good or all bad. It is a place where willy-nilly the long-standing differences between men and women are bound to come to the surface. Perhaps all we do have in the end is keeping the lines of communication open and articulating one’s wants, desires and expectations.

And, as Dr Mukherjee puts it, “If you are married, there has to be a degree of adjustment on both sides.”

Excerpted with permission of the author.