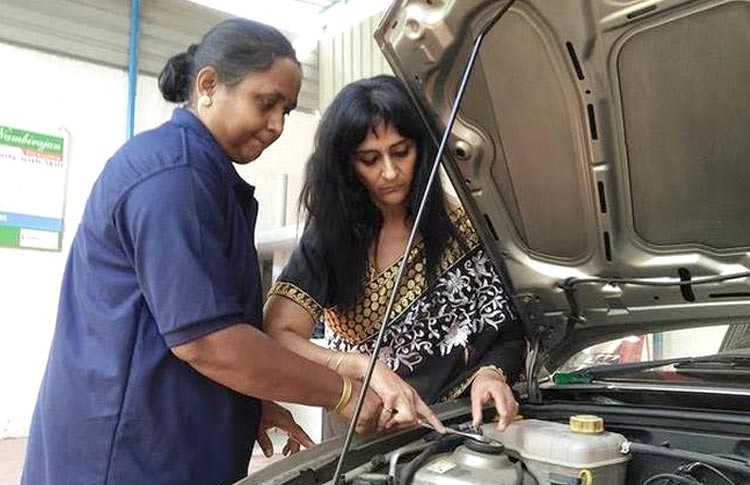 Paramount Auto Bay Services, a 30-year-old business, was handed over to Vidya Nambirajan by her father in 2001 thus making her the first woman in Secunderabad, Telangana to own an automobile service outlet.

Talking about the driving force that made her kept going, Vidhya shares how the very same staff that used to follow her father’s instructions sans any doubts became difficult to handle for her owing to her gender. A woman guiding them in a traditionally male-driven setup was new to them and that didn’t go down well with them initially.

The attitude of the customers was no different than her staff. She shares: “I found that if my mechanic, a male colleague, said some part needed replacement, the customer would readily agree without a question. But a series of whys and hows would be shot at me if I had to deal with the same customer.”

The very same attitudes strengthened her resolve to prove her mettle. “I wanted to prove that I could do it much better, and that drove me,” Vidya says.

Almost 18 years later now, owing to her hard work and resolve, a lot has changed. She shares: “People look at me with either apprehension or in awe.”

Vidya has hired both men and women over the years and strongly believe that the women don’t take their job for granted and are thus more process-oriented and committed. She states: “It’s easier to train women, but more difficult to retain them, as they lack family support.”

Vidha has diligently worked on her garage and has ensured that it is ISO-certified. Besides that, she has also started a Skill Development and Placement Centre and extends the service free of cost to women. Her students, in fact, get placements as automotive service technicians both in India and abroad.

To top it all, she has also tied up with DUALpro, Germany, in conjunction with the Indo-German Chamber of Commerce (IGCC). It is a first of its kind initiative in Telangana. Vidya has ensured to get the institute DAkkS-certified which is a German certification for quality management. A three-month on-the-job German Certification Course equips the technicians to work anywhere in the world.

Vida takes very good care of her trainees and that’s apparent from the fact that she has also procured an affiliation to the Automotive Skills Development Council. It qualifies her trainees as Automotive Service Technicians and gives them a  boost in their career. She has also tied up with on-road assistance services like MyTVS, India Assistance, and Allianz and plans to expand in the entire region of Southern India.