Giving Underprivileged Women An Identity, Geeta Uppal Is Weaving Life Into Her Sarees 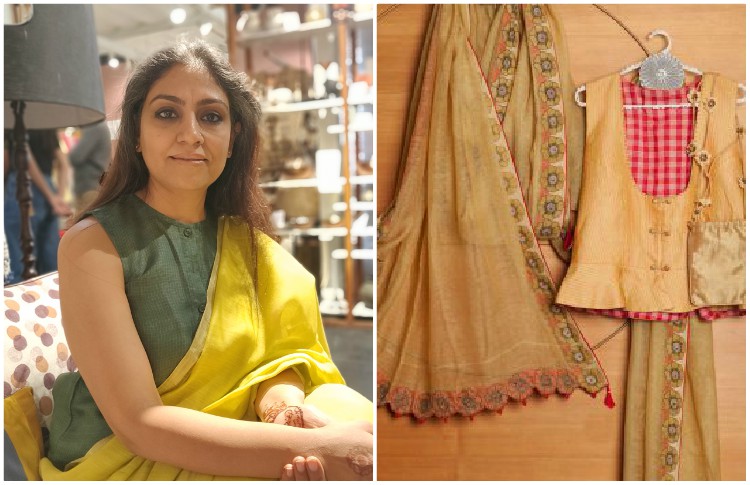 It was architect Geeta Uppal’s exhibition of her innovatively designed and curated sarees that greeted me the minute I entered the store of AnanTaya Decor in Jaipur. And to say that I was floored by the beauty of her creations – simple, yet elegant – would be an understatement.

It was the 6th day of the eco-festival Maahiroj, which is back in full force with its 6th edition on the theme of Water – the force of all nature. Presented by AnanTaya Decor, Maahiroj, literally translating to Earth Day Every Day, is an experience of unearthing the planet’s potential for sustainability in collaboration with like-minded designers and artisans from across the country.

One such designer was Geeta Uppal, whose brand Sarigiri is re-discovering the charm of saree but in a totally sustainable manner. From using just organic colors and fabrics to employing women from the underprivileged sector as artisans, Geeta’s brand is an organic extension of herself.

While I was initially there to only attend Geeta Uppal’s session, her skills, evident from her sarees, prompted me to chat with the talented designer who transforms the “mundane and imbues it with a sense of whimsy and earthy chic.”

This environmental consciousness that reflects in your brand, what was its source?

In my childhood days, it was my grandfather who instilled in me the zero-waste philosophy, which he ardently followed. We were given a limited number of garments to wear and the only thing we were allowed to splurge on was books. Unlike other kids of our age, our habit of carelessly losing things was not entertained, especially when it is the non-recyclable products like erasers. We had to show our grandpa the one which is on the brink of blinking out of existence to get a new one from him.

So, I think this concern about environment I have inherited from him.

Each handpicked handloom sari has been embellished with applique, embroidery, patchwork or other beautiful techniques of handiwork and then teamed up with semi-stitched blouses and accessories that mix rather than match.

So, how did this environmental concern merge with your love for sarees?

Wearing sarees always came naturally to me because my mother and my three elder sisters, they always wore sarees. I grew up being awestruck with the grace and beauty a mere saree can impart to the wearer and thus, I started wearing saree from a very young age. Be it any occasion, saree was my first choice.

Also, I set up my architectural practice when I was very young, just 22. So, even here saree helped me as I had to look mature and grown up to be taken seriously and in gravitas, with the persona, I was trying to project. Another major reason was that early in my career I got a project to design a sustainable building with zero-concrete and the textiles used needed to have a minimum or no carbon, so we had used vegetable pigments for coloring. We traveled to parts of Rajasthan to pick up our textiles. This project intensified my interest in sustainable textiles.

And thus began the journey of Sarigiri, right?

My desire to seek uniqueness often led me to mix cloth items for a particular purpose and use it for something else. Like once I found a curtain with such intricate designing that I decided to make a blouse out of it. Sounds eccentric, na? I thought so too until people started complimenting my look. This appreciation led me to start designing sarees for my family and close friends.

Two years ago, I was diagnosed with an auto-immune disease and thought that things are coming to an end and though I had a good career as an architect, there was a lot more I had to do. I wanted to do something that comes from my heart and touches the lives of people around and thus, the journey of Sarigiri began.

Are you wearing one of your creations now?! That does look like the combo of simplicity and elegance, your collection of sarees at home must be equally amazing.

I have over 2000 sarees from more or less all the regions of India, which I keep sharing with my nieces and sisters. The saree I consider my prized possession is the one I picked in Orissa, created by master craftsmen who came from a popular family of weavers known for their unique weaving.

Other items of clothing go out of fashion after some time, a disadvantage that saree never had. Saree has this forever quality to it and they can be upcycled, recycled. One can up the look of her saree by adding accessories or keep it simple. You can also change its styling – you can wear it with a skirt, with a jacket, shirt – there are endless ways. In fact, we have cataloged 120 ways of wearing saree.

Wow! I think you reignited my love for sarees. As much as I love your creation, I also admire your noble thought of giving employment to underprivileged women in Sarigiri.

These women were looking for a job that would allow them to earn their livelihood, so I connected with these women and taught them my designing process. Now I showcase their work, aiming to give them the recognition they rightfully deserve.