From Underprivileged Women To Abuse Victims, Sherina Kapany Is Providing Them With Jobs 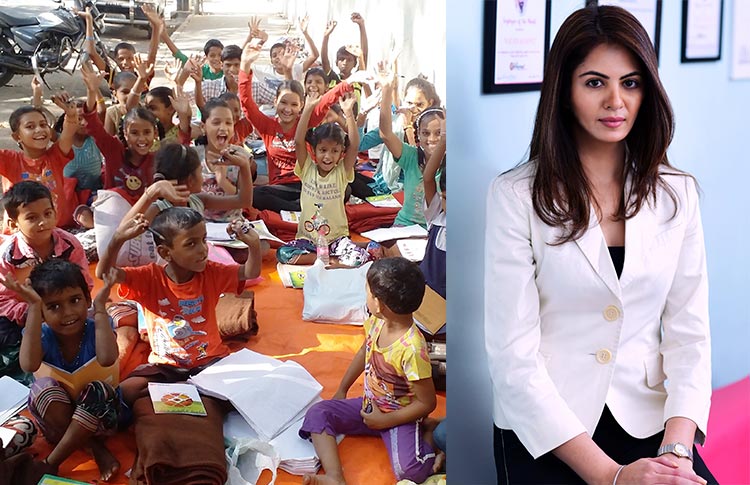 “A woman, without her man, is nothing”- Oh, how it infuriates me that our narrow-minded society vows to stick by this senseless logic. Women have, time and again, successfully established that they are the unsinkable ships in the tornado of life, bravely sailing along the daunting waves. And my beliefs were further cemented when I came to know Sherina Kapany.

Sherina is the creator of that foundation where a woman in power is no topic of wonder. ‘Why’, you ask? ‘cause it is not a rare occurrence there. Established in 2014, SunStrategic, a digital marketing startup, was founded by Sherina and is an all-women management team comprising many from less-privileged backgrounds. Beating the hurdles life lay in her path, Sherina not only empowered herself but also other women she found along the way and is working for the future of underprivileged kids as well.

Acing the so-called ‘man’s world’ Sherina and the women she is working with are today the example we can take inspiration from. Well, acting on the same thought, here is my chat with Sherina. Excerpts:

Why don’t we start with how SunStrategic came to be?

Though the idea of doing something for the empowerment of women was always there and I had already registered my company SunStrategic in 2012, my divorce and the subsequent difficulties I went through fueled my existing compassion and I found my true mission, laying the foundation of my company in 2014.

I met women who were going through similar situations like me or even worse, they were broken. I wanted to give them what they lacked- hope and in the process of building them up, I was giving myself strength as well. It was helping these women that kept me going and still does.

Growing up in Bombay, at the age of 16, she went abroad for her studies and settled there. She had an illustrious corporate career in the US and worked for top companies like Warner Brothers, Capgemini, Estee Lauder, and many others. After living for 14 years in the US, she returned to India in 2013.

Can you tell me in what ways the personal tragedy you went through transformed you into the leader you’re today?

It was… (she draws in a deep breath) a very hard time for me. I had been extremely tortured, harassed and discriminated against for being an educated woman. I was thinking that being genuine in this world leaves you as someone to be taken advantage of. But as I met these women and worked with them closely, I finally realized that being good in this world is the best gift I could be blessed with because these women had survived worse than me and still continue to be the best version of what being a human means.

Women do possess this herculean strength. So, what was the thought in your mind when you began your work?

Well, it started in my living room itself with one lone employee who worked with me for more than 20 hours a day! And with the realization that these women don’t just need a livelihood, but a direction they can move and find their success in.

And that they did, right?

Today we are a company indulging in digital marketing strategy, but many like to comment on the fact that these women who are holding managerial positions today were once not qualified for the post. But what I saw in them was the hunger for learning, the passion for excelling, loyalty and humility and the big thing is that they were unaware of these rare qualities they possessed.

And now we have clients like Bajaj, Droom, Airtel, Cipla, and many more who generate over 2,000 crore in revenue. Such progress is unheard of and is exactly what I tell my family at SunStrategic to take pride in.

Wow! You have come a long way since 2014, any major realizations that you made along the way?

I made this sad discovery that in India, women feel guilty for being successful and it’s her upbringing, her own family and the society that feeds that gnawing thought in her mind. And the background I come from is where the opportunity to write your future is not just reserved for men.

And the next, something which I stick to even today, is that if someone is doing wrong by you and you choose to silently accept it then you are as much of a sinner that the other is as Lord Krishna once said.

You mentioned how your upbringing is different from what other women get, why don’t you tell me about it?

My father used to travel a lot so I was exposed to many different cultures at a very young age. The broad-minded mentality that runs in my family can be judged by the fact that my grandmother holds a Ph.D. from the University of Chicago.

Imagine a woman being encouraged to study abroad by her husband at a time when women didn’t have the privileges they have today? It was the 1930s, and my grandpa gave up his career to make sure that my nani had one. Women are the backbone of the family- a principle that my father learned growing up and instilled in his three daughters as well. When I was going through my separation, my father said: “Go live your life, don’t worry what anyone says.”

That’s a childhood every child in India should get. Let’s talk about the women who work in your company.

Most of these women have never worked before joining my organization. As I earlier mentioned, they were not adequately qualified to earn the position, but what I asked them was to work hard to keep it. And they have never, ever disappointed me. I have got such a dedicated team which is ready to respond to a customer’s request and works with enthusiasm even on off days. Sounds impossible, right?

A bit (we both laugh). So, while they are working with zeal, are there any provisions in place for them as well?

This is not a company I am running but a family I have built. When these women are willing to work tirelessly into the night and the customer is more than happy to get his work done early, I put my foot down and close down the office. The well-being of my employees matter as well. We have a 360-degree system for their medical and hygienic needs. They get period leaves, if someone is going through a divorce or is pregnant, we give her months-long offs along with constant aid from my side.

Many women who join us have been going through terrible cases of abuse and violence in their life, so we arrange for their proper care, from doctors to therapists to monetary help as well.

Such help does make one feel like they are in the family. But not many companies are that keen to employ women, any message for them?

Oh, boy! You don’t have any idea about the intellectual and creative talent you are missing out on!

Well, who knows when they’ll accept the truth here, so meanwhile why don’t you tell me if you’ve faced gender disparity even as you run your own company?

Yep, many times. Hard to change people’s mindset, right? So, there was this gentleman I was in a meeting with. To start with he was not really taking what I was saying seriously and even left the meeting when someone came to meet him, without so much as a sorry. I went up to him and frankly told his boss that how his employee behaved reflects poorly on the company and he better appoints a better HR who will bring in people with a sense of civility.

Ooh! You are a badass. So, empowering women is your main goal, but are you involved in anything else as well?

I also take part in social commitments like developing educational content for children studying on the streets for the Ashapura Trust.

We visit old-age homes from time-to-time to give them clothes and spend some quality time with them.

You are helping others build their dreams, Sherina, but what about your personal dreams?

Oh, I am aiming to learn cooking Italian dishes as I wish to retire one day and settle down in that beautiful country.

Ah, dreamy. So, while you are one motivating message to all women yourself, any parting words for them?

Don’t you let naysayers bring you down, cut out that dirt from your life!

This article was first published on February 17, 2018.