From Toronto To Mumbai, Designers Mriga And Amrit Have Carried Their Love For Indian Textiles With Them 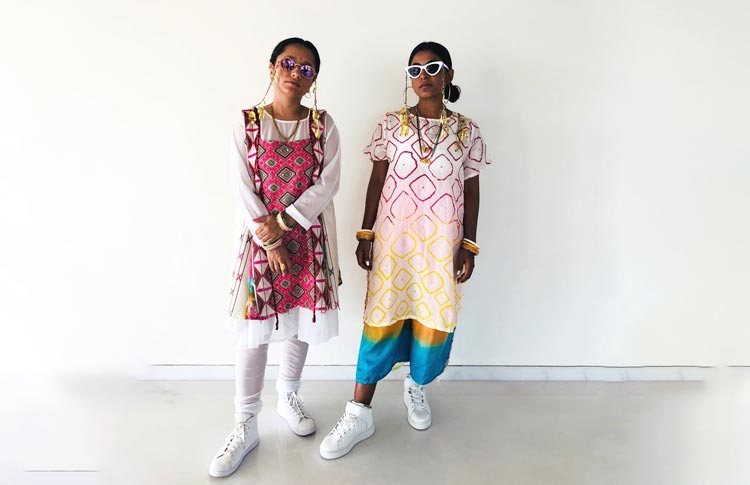 In an up, close, and personal chat with the two dynamic designers of funky yet glamourous street-style brand NorBlack NorWhite – Mriga Kapadiya and Amrit Kumar – we discovered that their mutual love for laughter, colours, prints, and Indian textiles brought the two friends together.

Their love for everything Indian had them pack their bags and come to Mumbai from Toronto in the year 2009. They traveled across the country, met artists and communities who worked within centuries of tradition before they started their brand NorBlack NorWhite (NBNW).

The vibrant textures, patterns, and colors of the brand are what made NBNW stand out. The duo’s aesthetics of combining modern street-style with Indian textures caught the eye of the world and saw celebrities like Lily Singh, and Sonam Kapoor make a statement in the apparel.

We discovered the bond between the designers, the blend of the fashion and pop-culture world, and a lot more. Read excerpts:

Let’s begin with the friendship story of Mriga and Amrit.

Both of us are from the diverse city of Toronto and that’s where our friendship began. Our mutual love for laughter drew us closer to each other. Yes, we love to laugh! Another thing that brought us closer was the shared taste of aesthetic of remixing Indian traditional textiles worn in a current context and similar sense of creation. We both love to work in a style where we work with all types of people and we both have a longing to learn about indigenous communities and art forms.

This one’s for the cutie mehndi vibes #everydayphenomenal

Growing up in Canada, who and what introduced you to Indian textiles?

So, when we first met in Toronto, the first thing we noticed about each other was that we were both rocking our mamas’ shawls. So, ya, our love for textiles started with our mamas and their sarees and shawls. At the same time, we were growing up with a street aesthetic in Toronto, and we were both curious about merging the two different worlds.

You both have also merged NBNW with the world of pop music as well. After the song Lean On, it was Lily Singh, aka Superwoman, who wore NBNW in the music video Girls Like You. Tell us about the experience.

Lilly Singh is a sweet supporter and a friend of NBNW and is someone who is always down to support women who are out there trying to create a new path. What she wore in the video is the Velvet Vixen jumper that she had bought prior to the video and decided to wear it by her choice. She shared the video with us after it came out and said ‘Look what I wore!’

BE YOUR OWN BAWSE @iisuperwomanii

After having collaborated with international pop stars, how do you both make sure to keep a balance of culture (without appropriation) in your collaborations?

NBNW has and will work to shift perceptions around handcrafted and indigenous goods. We have tried our best to be the bridge between a rapidly declining artisan population & a contemporary urban consumer.”

India has endless culture & history that is quickly evolving and it’s important to identify and contribute to making sure evolution doesn’t simply mean working towards colonial ideas of greatness & success, including the mass manufacturing of everything.

We want to document the process of creation and explore the cultural landscape of the country through textile, art, collaborations, and storytelling. We want to challenge the popular notion of what Made in India͛ means to the world.

Also, how, according to you, does fashion influence music and vice-versa?

All artistic practices influence each other. We grew up heavily influenced by 90’s RnB & Hip Hop – from the sets to the styling to the whole vibe. Even though the culture of music video making has evolved and there is just so much information out there, it sometimes is hard to stay inspired because of how fast things are moving. We are lucky that musicians, performers, and artists make up a big part of our following and are usually very excited to wear NBNW because they feel alive in it and it doesn’t really look like a lot of other things out there. Fashion & Music go hand in hand and it’s kind of nuts to see how many brands have blown up because they’ve aligned with musicians on the same wavelength. When you think about some of the most iconic performers, the songs are top of mind and usually, their style is also something that is to forever remember.

Happppppppy Holi! It can be a very romantic celebration with colours and springtime bloom and all the flourishing, inspiring, fun vibes. It’s also a time for whackos to feel it’s ok to grope and touch and fondle. Hope you found a safe and celebratory space for you and yours.

943 Likes, 6 Comments – NORBLACK NORWHITE (@norblacknorwhite) on Instagram: “Happppppppy Holi! It can be a very romantic celebration with colours and springtime bloom and all…”

And, what has been the biggest fashion-meets-pop culture moment in your career?

When we were asked to work on a music video shot in India for Major Lazer we thought, ‘oh that’s cute’. Next thing we know, the video gets over 1 billion views with a lot of our styles being front and center. Another crazy moment was when we received crazy reaction when Sonam Kapoor wore our first ever Shimmer saree to Cannes. That brought in a lot of love for the saree within the Indian diaspora and in India too.

This time last year we dropped our first ever sari. Stepping up our sari game with the new new tomorrow!

1,597 Likes, 7 Comments – NORBLACK NORWHITE (@norblacknorwhite) on Instagram: “This time last year we dropped our first ever sari. Stepping up our sari game with the new new…”

You both have consciously chosen to stay away from fashion runways. It was the textile theme that got you on the ramp last year at Lakme Fashion Week. What is the reason behind it and what else can bring you more often on the runway?

Being an independent business, literally built from our bedroom in Bandra, we have to be precise with our decisions as making mistakes can be very costly. The reason we stay away from runways is that they can be very costly and we feel we can create much more impact by using our time, energy, and money in alternative ways. We are also interested in showing diversity in our visuals, love working with dancers & movement, and real environments.

If we were sponsored to do a runway show with full creative control, we would definitely be interested to explore the platform.

Do you think we can use fashion and pop culture to bring optimism in these troubled times?

Everyone has a story to share and as long as it has integrity it will be authentic and reach people who feel that realness. Fashion is a tricky space because people can look at it as a strictly commercial platform, however, we and many other peers work hard to push those ideas out and explore it from the point of view as a space to also empower people in their days to feel great about how they feel and look to go about their days. We work hard to make sure we show a diverse range of people in our visuals, so more and more people can be seen and heard instead of never feeling good enough or feeling they can never look like a ‘model.’

By focusing on these small, daily details while trying to stay positive and while constructively calling out a lot of the bullsh*t in existing patriarchy and colonial structures, we hope to deconstruct the troubling parts of many of the messed up systems & socio structures of the world. If we can help inspire people to feel great about themselves, feel empowered and confident to take on the world, then our job is done.

If Mriga and Amrit ever write a song, what would it be about and what would the singer wear in the video?

“We would remix Black or White by Michael Jackson and everyone would be decked in 100% NBNW and a mix of classic vintage favourites.”

when cuties roll through 🌹 #LINKINBIO

How nostalgic do your collections make you both?

On a scale of 1 to 100, it’s 100! Nostalgia is a big part of our process, and as we get older, we look to the past with a fresh eye and are highlighting our favourite things about growing up.

Throwback from the fashionable childhood days

Take us to the places in India that inspire your collection.

Every day, everywhere we go, there is usually something that is inspiring. It’s about keeping the eyes wide open and the hearts even more open. We get inspiration from the streets below our studio to states like Kerala, Kashmir, Andhra, Himachal, Rajasthan, and our forever love Bombay. The more we explore India the more we fall in love and stay inspired.

BOM BOM we bout to drop that beauty bandhani silk collection. This fabric took forever to tie and dye by our favourite bandhani family. It’s limited edition and made to order so don’t sleeeeep. Chhota Mota dropping soon.

Before we wrap up, tell us about the story behind the name NorBlack NorWhite.

The name NorBlack NorWhite was born from the duality of the two of us – a balance between extremes and blurred boundaries between old and new, East and West. We explore the idea of grey space from various levels of creation and communication and our believers that the world just isn’t black or white. Our name is a play on the popular love in fashion for all things black and white. Most importantly, it’s an expression of our love for Michael Jackson’s infamous Black or White video representing diversity, colour, and love in all forms.

Thankyou Marrakesh for feeding us all the tea, tagine, sharing dates and the gentle ways of breaking fast to always dream with a belly and heart full up.

1,684 Likes, 20 Comments – NORBLACK NORWHITE (@norblacknorwhite) on Instagram: “Thankyou Marrakesh for feeding us all the tea, tagine, sharing dates and the gentle ways of…”