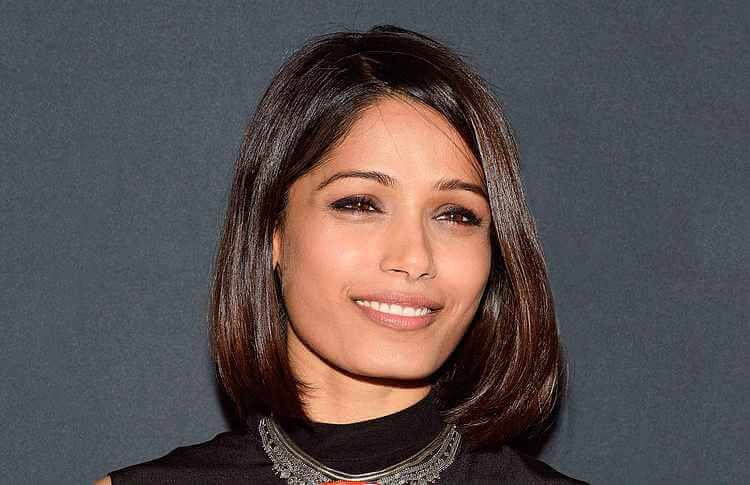 Actress and model Freida Pinto put women’s rights front and center in her support of Leslee Udwin’s documentary “India’s Daughter,” which had its U.S. premiere on March 9 in New York. Pinto is the film’s associate producer and ambassador for its global campaign with Vital Voices and Plan International to stop violence against women. The film tells the story of Jyoti Singh’s tragic death, when she was gang raped on a bus and the implications of this crime. It is one of the most brutal rape’s in India’s history that sparked outrage across the nation.

Pinto said she is proud that her parents gave her an education, which empowered her to have and use her voice. Two days before she met her dear friend’s six month old baby girl. When she looked into her big bright eyes, she saw this pure light, absolutely alive, very aware, this blank slate full of potential and oblivious to skin color, status and gender. But in more places than one can imagine in this world, a new born child has been already been categorized. That child has either been welcomed with joy and festivities, or that child has been welcomed with barely concealed indifference. That child has also been damned, undervalued and in many cases that child has been killed before she is born. Because being a female in today’s world is at best an exercise in subtle injustice and at worst a living hell, Pinto said.

In the subtle category, Pinto spoke about a television script she had received the previous week for her consideration. The show is meant to be a politically incorrect comedy. The role was described as a girl with sweet Indian accent. It was hardly ground breaking, but she kept an open mind. Her character appeared on page three which undoubtedly was better than appearing on the last and final act just to scream “help me.” Nothing could prepare her for what she was about to read. Two male friends, X and Y dial to a call center and a sweet female voice answered. Picking up the male character X’s arousal by that sweet female voice, male character Y explained, “amazing, one second with a stranger’s voice on a phone and you’re practically gang raping her on a bus! I assume she’s an Indian.” It wasn’t funny. They pay these writers the big bucks and let them host big awards ceremonies.

She emphasized that this isn’t just an Indian issue. Women have been mistreated and viewed as inferior across the world for thousands of years. Read her full speech below:

“Tonight you heard an educated Indian male lawyer claim that in our culture there’s no place for a woman clearly he’s not­­ alone in his sentiments ….

Tonight is not a place for a full cultural history of woman hating.
Suffice it to say that it has always been so since the earliest preserved records and I have a little bit of proof here. From the book of Leviticus which said, “menstruating women are unclean and whoever touches them will be defiled.” To Aristotle who referred to a female as an incomplete male or as it were a deformity. From Confucius, which always has me a little confused and I don’t understand why he said this, who felt that a hundred women weren’t worth one testicle. To a certain public figure who stated that marital rape or spousal rape is not a crime and that was just last year.”

Freida spoke about when she first heard about the crime in India:

“So today in 2015 despite the vast improvements in the lives and rights of women across the world in the last century, there still seems to exist this very complex network of ideological and cultural norms that still plague our society and that make global misogyny, in my opinion, a great scourge and most pressing issue of our age …

But really our pride is misplaced when there is one gender on this planet that is yet to be emancipated.
When we watch a films like “India’s Daughter” when we imagine Jyoti’s terrorizing, terrifying, heart breaking and harrowing suffering, we think of those bright little faces of the girl children we know and that pain becomes almost unbearable. There is this universal visceral reaction, this physical clamping down of one’s own body, which make logical discourse so very hard. I remember being in India when this happened and I remember my reaction, which is still my reaction to date. I remember my female body parts just recoiling and cringing with horror, with disgust and absolute rage and I know that this reaction is not just limited to my sex, because I have had male friends and male family members who felt the absolute same thing in their own male bodies. The mind just reels at such suffering and there is no other way to react but emotionally. But make no mistake, this is not an incident and this is not an experience that is just limited or restricted to the third world. First world men and women readily understand that millions of women are subjugated globally. And it’s all well and good for us to sit in this room and be mortified by the state of women in India, Pakistan and countries of Africa.
But if would take further introspection before they acknowledge that the same dynamics exist within their own culture and I’m not just talking about sexual crimes, which is a grim reality even over here, even in England and Australia.
“

She spoke about women having financial equality:

“But I’m talking about something that you could possibly place in the more modern world. Something that is more advanced or civilized … such as, the refusal to pay a woman the same as a man for the same job and there are jobs, but those jobs come in a very strange and tough climate. When a woman from the first world sits in a fishbowl in the male boardroom it doesn’t feel like it’s her own self-respect that is being eroded when she stays silent or even laughs amidst misogynistic remarks. It feels as if she’s letting her less fortunate sisters across the world drown. And yet to speak out against it is to taint herself as an “uncool girl” or “the girl who can’t roll with it” or “the feminist.” I cannot wait for that day when this generation of women and men finally realizes that claiming to be a feminist is simply asserting that you share the same spiritual and economic value as your male counterparts – as each other. So I’ll ask you tonight to stand with me in a call to arms to be the new greatest generation, the generation that makes misogyny and violence against women begin to recede into the past and you may ask how and that is a very important question. I know that I’m not alone in this restlessness and urgency in order to see this change happen. This is all really overwhelming even for me with all this information so many ideas, so many amazing people, so many detractors and so many people who share the same vision as well and it is very easy to get discouraged and enraged when you face dead ends such as bans.

So to begin, we must take hope, hope not just from those women we saw marching on the streets after Jyoti’s rape, we’re very inspired by them.”

Men’s support is crucial to this movement:

“But I say let’s take hope from the men, did you see those faces of those thousands of enlightened men in the streets in India? Well you can see that here tonight, you have met them at work, you have met them at play, church. I have them in my life and you have them in yours. I am my father’s very proud daughter and these men are the torchbearers. These are the men we call to fight to stand up for what is honorable and to speak out vociferously against sexism in the workplace and against violence in the home. We equally call upon men who do not believe in equal rights. This is your fight too, your fight to defeat and transcend your own mind sets.

Women don’t ask to be ahead of you or behind you, we just want to be by your side as equals.
I want to take this opportunity to call upon the men of the future, teenage boys, to not succumb to the pressure to shame girls at parties and on the Internet by posting demeaning videos especially on social media. With you men as our allies, we women have hope. Secondly, I call upon policymakers and world leaders male and female to imagine bigger to redefine social and economic policy to reflect this conversation. We need to focus on girls’ education globally, so that they can participate in the economy and raise the next generation of enlightened males. We need our leaders of democracies and I stress on the word democracy, democracies like India, United States of America, to not be afraid to face the dark reality of sexual violence. The shame is not in admitting the existence of such violence, the shame is in the crime and not speaking out. In this way, if not us, at least our grandchildren will grow up in a world that’s free of gender discrimination. And to clerics and religious leaders I urge you to consider the magnitude of your influence and your public statements, you have the power to grant women honor or disrespect within all your faiths, please choose honor.”

Women must support each other as well:

“And finally and most importantly I call upon women to raise each other up, to make each other’s welfare a priority and to never shame a woman for the choices she makes. Don’t judge her for her marital status, do not judge her for who she sleeps with and please do not judge her if she simply goes out to see a movie with a friend. Refuse to internalize and reject the centuries of woman hating as hard as that might be, with all of us doing these things and educating our children to do the same, we may finally have that chance to stamp on that opportunity to shift the paradigm that led despicable events of this film. And never ever give up hope that your actions and words however big or small can be part of this shift. So before we return to our lives this evening I ask you … to close your eyes for just a moment with me … and I ask you to imagine, to be in the presence of this bright light, this light will come from any source or any direction, it could filter in from anywhere, it could be the light that we lit at the start of this event, for some it could be a stoplight, it could be a flickering candle in a dark room or maybe the big bright sun. Let it bathe you. This light is Jyoti, Jyoti literally means light, my Indian sister who was gang raped and killed on a bus in Delhi and all she is saying is “please please don’t let anyone put me out again.”