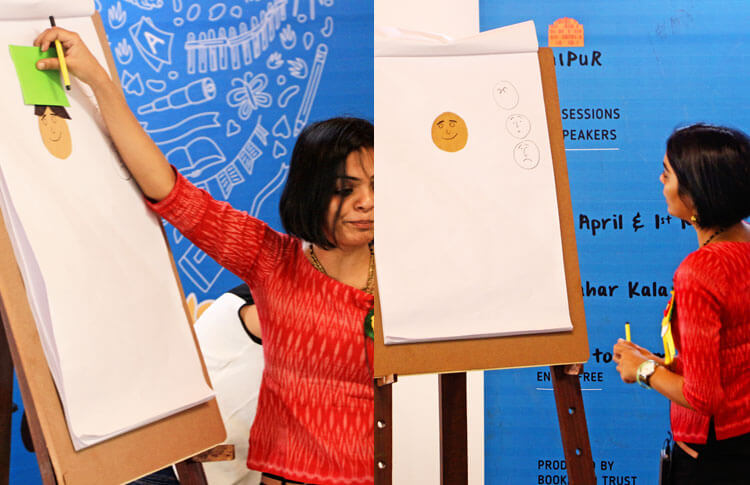 She captures India like no other. We’re talking about the Illustrator, Priya Kuriyan. Based in Delhi, she began taking inspiration from everyday life around her. Until one day, she realized that these stories are the stories of every Indian!

The uncles, the aunties. The bhaiyas and didis. The stares and those awkward positions. Priya loves to safeguard these moments in her sketchbook.

We happened to speak to Priya during her visit to Jaipur where she had come to conduct workshops for the little ones. The classes were a part of 1st ever Bookaroo Literature Festival held in Jaipur. To be honest, we would like to instill the kind of patience with which Priya was handling the kids.

In this particular session, she was teaching them about how to use waste papers, remaining cloth pieces and old gift wrappers to create art. She formed a boy with thick eyebrows wearing a green hat. We loved how Priya paid exceptional attention to his expressions.

She announced, “Let all the paper and cloth waste in your home not go to the dustbins. From now onwards, we will try to utilize them in making creative illustrations and collage art. Okay?”

JWB: How has the Indian living style inspired you?

Priya (smiles): In many ways. For example, when I shifted to Delhi, I never liked the city, but it has its rhythm. Slowly, I grew fond of its diverse culture and began drawing things I saw in the streets and metros. My ‘Delhi Series’ was appreciated that shows how Dilli-wale are. Actually, how Indians are. It was a fun experience.

JWB: And, how much have you inspired yourself? Come on, tell us the secret behind that doe-eyed girl you often draw.

Priya (laughs): I have no explanation to give, My Lord!

JWB: We want you to keep doodling for eternity, Priya! You are too good!

Priya (giggles): I do illustrations for children’s books. It is therapeutic for me.

Priya: I so want to. In near future, I want to write for my illustrations. Maybe, formulate a book out of them. Let’s see.

JWB: If you are to draw your Dreams on white paper, what will it look like?

JWB: Amen! What tip do you have for parents to engage kids with books and take up reading?

Priya: Surround them with books and not gadgets. Leave them with nothing but this ‘imaginative’ choice! (chuckles)

JWB: Do you think the female artists are fortunate? Apologies for citing ‘Female’, but such is the reality.

Priya (sighs): I understand. When a girl wants to make a career in the art field, it is considered merely another hobby to keep busy. On the other hand, I also want to suggest the aspiring ones not to compare the money made by them with that of corporate guys’. Of course, there is a huge gap, and it takes some time to reach the top. But hey, nothing compared to the pleasure we sense!

JWB: Before we wrap up, we want to know what’s in your sling bag apart from your sketchbook.

Priya: A handy-cam and a wallet. Now, don’t ask me how much is in the wallet!