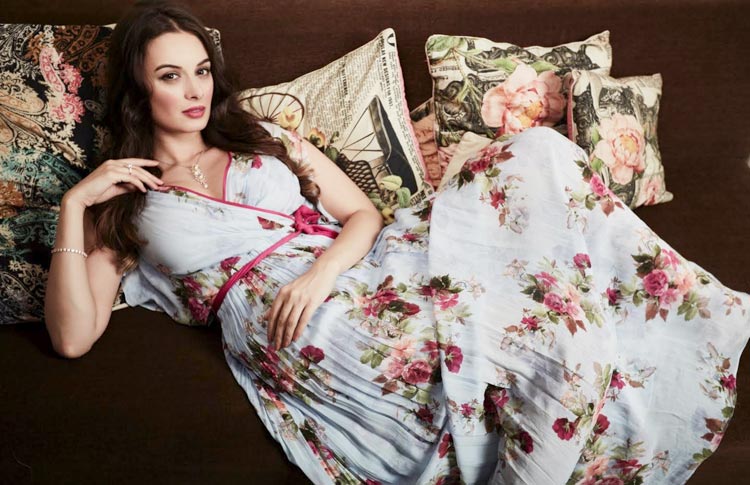 IWB recently connected with the model-actress Evelyn Sharma, and we fell in love with her silly-funny self. “This is how I am, a little clumsy, a little funny, and I like doing roles that allow me to live these vibes on screen.”

Born to a German mother and a Punjabi father, Evelyn had a lot of interesting anecdotes to share from her growing up years in Germany. Her father passed away quite early, which made her miss out on her Indian identity and the only connection she could preserve while leading an ‘as German as possible’ life was through Bollywood films. “The German channel on which my friends and I watched SRK’s films, now telecasts mine,” she said gleefully.

Closest to her three-year-old dog, Buchki, Evelyn revealed many less-highlighted parts of her life. A philanthropist, she runs a charity, Seams for Dreams, which aims at providing clothes and housing to the lesser privileged. And now she also has her own interactive website! More on it in the excerpts below:

Is there a story behind your middle name ‘Lakshmi’?

My father was a Punjabi, and mother was German, and they were having a difficult time deciding my name – he wanted to name me after a Goddess, and she wanted a more simple and universal name. And eventually they settled on Evelyn Lakshmi Sharma.

Ha-ha. And you grew up with that name in Germany! Were there times where you had to stand up for your identity?

Indeed there were. Incidentally, this was the topic I spoke at the National Prayer Breakfast hosted by the US President in Washington D.C. earlier this year. Growing up as a child with ‘mixed identity’ had me experience many odd instances. People in Germany would look at me and comment about me looking Indian, and Indians would say, ‘hmm she looks like a foreigner’, she laughed. But I believe a lot of things are changing with time, and the world is coming closer to become one place. Hopefully one day we’ll be known only as citizens of the world.

Amen. So who gave you the first Hindi lesson? Also, I read that you are well versed in eight languages!

Interestingly, the first Hindi word I learnt was ‘chup’, which my mother used often, and for the longest time I thought it was a German term for ‘shut up’ (ha-ha). So that’s how I got introduced to Hindi, but learned properly only after coming to India. Though Hindi is closer to German than it is to English, so it was not very difficult for me to adopt the dialect, but I am learning it better with every passing day.

Amongst other languages, I picked French and Spanish while working as a Foreign Language Correspondent. And Dutch, Russian, and a few others while travelling the respective countries.

Wow! So in what capacity was India a part of your life in Germany?

My mother used to make a lot of Indian dishes with a German twist, of which paranthas and biryani used to be my favourite. Times when my friends would come home, she’d make these dishes and they would go crazy decoding the ingredients, she laughed.

And Bollywood was also a huge attraction! There was one German channel that showed dubbed Bollywood films on Friday night, and I never missed a Shah Rukh Khan movie. I loved how dramatic they used to be. And now my friends watch my movies on the same channel – it is a strange happy feeling.

I’m sure. Speaking of Bollywood, how was your first experience on the set, were you a bit anxious?

My first film was From Sydney with Love, and I was very anxious since I barely knew Hindi. One of my co-actors was a Bengali and I was under the impression that she would be well versed until the director calmed me with the secret that she, too, was just as good (ha-ha). The realisation that Indians themselves have different Hindi accents made it a bit easier for me.

What was the first lesson that you learnt from the industry?

I have done theatre in high school, but always had stage fright. But doing films, I realized that with digital camera and option of retakes, the pressure reduces and neither are there any limitations, so that helped me a lot in getting at ease.

What kind of roles do you see yourself doing in your future films?

Lots of comedy. I love doing comedy roles, free from inhibitions, they allow you to take on different characters. I enjoy being silly, and doing light-hearted films that make the audience feel light and happy.

Ha-ha. We sure haven’t forgotten your Ooh La La dance from Yeh Jawani Hai Deewani. Ever had the chance to have a similar real-life moment?

Oh, all the time. Who doesn’t, and I am one clumsy and chilled out person. So I must have had many such moments, she laughed.

Great. So what are you learning currently?

I love to learn new things. And though currently I am deeply involved in learning how to better run my charity foundation, alongside I am doing a lot of things. For instance, I asked? I am taking piano classes; I believe music stimulates the brain. For a long time I wanted to learn the guitar, but then I realised that I am not really a guitar person. Then I am always learning something to do with art and dance, and of course, my Hindi lessons, she exclaimed.

What is the craziest thing you’ve said ‘yes’ to?

To leaving my hometown and travelling to the big cities of the world for modeling. The place I belong to is very small and isolated, so it was a major call for me when I said yes to my first modeling assignment for which I had to travel to Thailand. That trip, followed by many others, changed a lot of things for me, she added.

And which would be that one travel memory from your initial modeling days that you hold the closest?

As a model, you have to do a lot of crazy stuff, from which an actor often gets saved as there are a lot of people in the crew to take care of you. So I have done all that standing on the edge of buildings and shooting in the coldest possible environment in “modeling” clothes, she laughed. But that aside, being a model, I travelled extensively and to parts of the world for which one usually doesn’t make travel or holiday plans. And that helped me explore new places and cultures that I would have never gotten introduced to.

Was there ever a moment in your career when you had to advocate for yourself? How did you approach it?

There were many, and if we think about it, throughout life there are instances where we have to stand up for ourselves. With regard to career, in particular, payment for assignments and films was one big area of dealing, and which I realise has gotten a lot easier since I have had a manager. Another one being, to say no to people for offers which they assumed I would say yes to since I came from a “foreign land”.

Hmmm. What do you say to yourself during tough moments, Something Beautiful, like the song that you wrote?

The one thing that I believe everyone should remind themselves, and often, is that you are eternally loved. If you can understand this much, life becomes a lot simpler.

That’s indeed a beautiful reminder. Tell me how that finds a place in your routine – how does your day start and end?

My day starts with prayer and meditation, and ends with a book. Wow! Would you tell me which book you’re currently invested in? Uhmm, I’m reading Consolation of Philosophy, it is a sixth-century philosophical work by Boethius. I really enjoy reading such books, and I believe that it helps in understanding people.

That’s a profound thought. Do you have a ‘Life Mein Ek Baar’ list, too?

Ah, I like how you’ve framed it. I had really enjoyed acting in that film. Hmmm, well, I don’t think I have a list made yet, but there are things that I have done before and only once, for instance, the ‘stupid man smartphone’ show, it was shot in a jungle, and involved a lot of tasks that I’d never done before. As for the future, since I love travelling, I do have some places on my travel list where I’d like to visit once, like Brazil, Mongolia, Russia, Mainland China, etc., etc. I also intend to invest in a ‘wellness’ business. Let’s see, no one knows what the future holds, but I hope that amazing things happen, and that I am able to work better on my foundation, Seam for Dreams.

Talking about you ‘Seam for Dreams’ Family, how do you plan to seam your Bollywood / Fashion Network to your dreams of helping people in need of clothing and housing?

It is never about making a big splash in the media, but that said, a lot of celebrities from either of the two fields are helping us. Designer labels like Rocky, Falguni, and others have been our supporters. And also, Vogue Team, they were a huge support when we launched.

You’re also associated with ‘Green Sole’. Guide us through the process of recycling shoes?

As I shared with you, we believe in collaborating with smaller NGOs, which is how we came in contact with Green Sole, which recycles shoes. From the shoes that Seams for Dreams receive, the ones that don’t find a suitable person, or those which are torn or can’t be used, we directly send them to Green Sole. They recycle and make slippers out of them, and donate back to people.

Yes, of course! So it was my idea and I handle it myself, as I love to interact with my friends and followers. In my opinion, social media platforms give you ample opportunity to share information with the world, but hardly any to ‘interact’. It’s like this one-sided, unreal interaction; you upload pictures and captions, and that’s about it. It lacks that personal touch. At evelynssecrets.com, I make it a point to share my thoughts and talk to people. I write out my philosophies, talk about the need that I feel exists for a positive obsession with self-love, share DIY of beauty products, and many such things.

This article was first published on December 26, 2017.