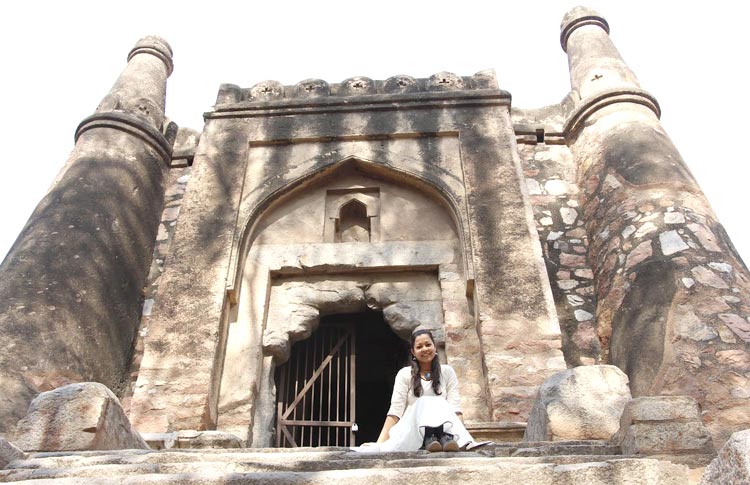 Right opposite Select City Walk lies Khirki village, a tattered fragment of Delhi’s migrant past, fast fading against the grandeur of one of Delhi’s most elite malls.

The story of Khirki village goes back to the time when Delhi wasn’t a city. While there is no written history, the community records suggest that it all started some 700 years ago when one of Ekta’s ancestors, Khoobi Chand migrated from Madhya Pradesh and settled in what is now called the Khirki village. Thus, most of the village’s population comprises of his successive generation, Ekta Chauhan being one of them.

Growing up, Ekta constantly wondered why most of her classmates visited their native village during the summer vacations while she stayed at home. “It took me a while to realise that it was because I lived in my village.” Three years back, they moved to Greater Kailash. “Even though it’s just 10 minutes away, now I have a village to go to,” Ekta chuckles as she says this.

While kids her age were busy exploring new games, Ekta grew up fascinated by the stories told by her grandparents. She left me flabbergasted when she very nonchalantly shared that her grandparents used to tell her with a sigh how Select City Walk was once a part of their farmlands.

You can ascertain the proximity of the mall from Khirki village from the fact that it is clearly visible right across the road. We used to say to our dadaji (grandfather), ‘Chalo aapko mall dikhate hein (Come, we will take you to the mall).’ To that he’d reply, ‘Arre mujhe kya dikah rahe ho, mere to gobhi ke khet the wahan (There is nothing for you to show, I used to have my cauliflower farms there).’” By the 80s and 90s, all of their lands were occupied by DDA. While the compensation was provided, an integral part of their life was taken away.

Her grandparents passed away a few years back. Around the same time, Ekta developed a keen interest in heritage and monuments. It was during one of her walks around her village that she realised that one of the biggest monuments of Delhi was situated right in the middle of the Khirki village, a tangible piece of its heritage.

Her grandparents were gone and most of the kids her age had no idea about the vast repertoire of stories that they enriched Ekta’s life with. “I realised that if I don’t do something about it right away, these stories would be forever lost to oblivion,” shares Ekta.

She thus approached Malvika Bhatia, the project head at the Citizens Archive of India (CAI) and a close friend. She was looking forward to interview all the elderly people of the village, archive their stories and showcase them in an exhibition, perhaps some years later. She sought Malvika’s advice on how she could go about the interviews, to which Malvika replied by saying, “Why don’t you partner with us?” and thus, her project Dilli Ki Khirki was born.

Ekta is thoroughly enjoying the process of interviewing the elderly under the project. Recollecting one of such interviews she shares with me the story of a man who disappeared from his own wedding to watch a movie. Ekta says, “He taught himself to play musical instruments, which is a big deal considering the fact that he had no facilities or mentorship to do so. He told me how he used to visit a little shop in Chandni Chawk to try his hands on the instruments. He has a little diary in which he has written the lyrics of some hundred songs. During the interview, he said to me, ‘Just select any one of these songs, I can play them all on my flute.’”

The little nuances of all such stories open the door to Delhi and Khirki’s past that Ekta is trying to archive through Dilli Ki khirki. Thus, the heritage sites located within the village and their maintenance are some of Ekta’s major concerns.

Dried up Satpula lake used by some to keep animals.

“Would you believe it if I tell you that a stream used to flow in place of the Press Enclave Road in front of the Select City Mall?” asks Ekta. This stream along with a few more of them used to meet at the Satpula lake which used to be swampy when Ekta was a kid and is entirely dried up now. There is a dam built on the lake which forms an essential part of Khirki’s heritage.

“If you look at its construction, you’ll realise that it is a very sophisticated dam which is a great feat considering the fact that it was constructed decades ago and was the only source of water for Khirki’s residents till 60s-70s,” Ekta says.

Khirki Masjid, a mosque constructed by Khan-I-Jahan Junan Shah is another integral part of not just Khirki’s heritage but of the entire country’s heritage. “It is one of the only two covered mosques in India,” Ekta explains. However, it is in a rather dilapidated condition today. It is infested by bats, stink and there is trash everywhere.

Ekta explains that owing to its prime location, if enough attention is paid to this mosque, it can very well contribute to the village’s economy by generating significant tourism. She gives the example of Hauz Khas village to explain what proper attention can do to Khirki. Ekta tries to sensitise people for the same during the weekly heritage walks that she conducts across the village.

Collapsed part of the Khirki masjid

With the generation that saw Khirki in all its glory almost gone, rampant encroachment and its monuments fast corroding in oblivion, a lot has changed about Khirki. But there is something that still remains unchanged – the sense of community that is harbored in the settlement.

“You will not find this sort of brotherhood anywhere else in the city. I had to order food because my mom wasn’t home today. However, it wouldn’t have been the same had I been in Khirki. Someone from the neighborhood would have certainly offered food and I would have also accepted it without any hesitation,” says Ekta.