Dr. Pawan Surana: A Professor Of German Language And A Huge Name In Women Empowerment! 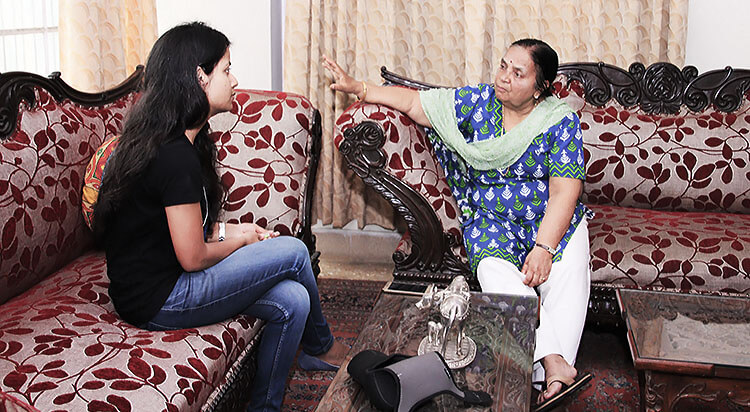 Dr. Pawan Surana, currently the General Secretary of the Indo-German Society in Jaipur, former head of the State Women’s Commission and Rajasthan University Women’s Association, the ex-principal of Maharani College, and a woman of resolute and firm willpower! I had the fortune of meeting and chatting with her on my very first day as a Blogger for Jaipur Women Blog.

When I entered her house, the plush green surroundings along with the beautiful white iron furniture caught my eye! I thought to myself, that besides being a woman of strength, Mrs. Surana has an artistic touch to her persona. I was excited to meet her.

A professor of German language and a big name in Women Empowerment! Tell me how your journey started?

I come from a small town in Rajasthan. I always had a deep longing to study. I am fortunate to have received the support of my mother and brother, due to whom I could fulfill this desire.

I did my masters in Sanskrit. During my study, I came across the elaborate work of German Scholars on the Vedas and holy grails of Sanskrit. This led me to wonder that if they could take up our complex dialect and work so well on it, why couldn’t we embrace their lingo? That’s how I opened up to the German language and eventually, pursued multiple courses in it across Pune, Hyderabad, and Germany. Most of my learning in German happened after my marriage.

I’m still a part of it. It’s been thirty years or so…

So, being a professor and being a crucial part of this association simultaneously, wasn’t it tough?

It is not tough when you have supportive people around you.

Back then, two dowry deaths happened in the area near the university. In one case, the family said the girl hung herself. When we dug deeper into the matter, we found that the 19-year old was actually beaten to death with a wooden stick. It was horrifying! Given the post that we have through education, it felt obligatory to do something. That is when, besides my university duties, I took this up.

For those of us who are not very well acquainted with RUWA and its functioning, here is what Mrs. Surana explained:

RUWA is an NGO. We hear cases of women exploitation, provide guidance and support, but we do not have the authority to punish. We intervene and assist the woman throughout the process and sometimes the cases are also solved through arbitration. We have our website and helpline. A lot of cases come to us through the latter. We started a women’s home: Shakti Stambh, years ago, which provides shelter to the troubled women free of cost. We get some aid from the central government for running this home, but it is inadequate, and never reaches us on time. 60% of the funding is through donations.

How do you act on the cases that you receive?

I’ll give you an example of a case which happened some time back. A girl from Bikaner called us. She was being teased by some guy and the police didn’t respond to her complain. We have the phone numbers of police of all areas. We called up the Bikaner police and told them that if they do not take an action, we will file a complaint. The reason that our complaints are heard is because we have a popular name, RUWA.

Do you think the police fear you?

There are some names that the police take seriously. Being the former chairperson of Rajya Mahila Ayog (State Women’s Commission) and RUWA, my name happens to be one of them.

State Women’s Commission! How did that happen?

Please share with us one of the challenging cases during your tenure.

Once, a farmer came crying to me saying that his 13-year old daughter had been abducted by a 35-year old teacher. The police caught him, but did not imprison him. Probably he must have bribed them. So there he was, roaming free, and telling the farmer “Tune kya bigad liya mera. Mai toh aage bhi aisa karta rahunga!”

I phoned the SP right away and questioned him as to why this maniac hadn’t been imprisoned. To which the SP said, that he couldn’t simply put anyone behind the bars.

A judge works under the chairperson in the State Women’s Commission. Meanwhile I delved into the laws through this judge and found that ‘If a minor is abducted, the abductor is subjected to imprisonment.’ You see how the SP was trying to fool us… but as I had the knowledge, I called him and told him that I was going to write a complaint against him to the CM. Within half an hour, that teacher was caught.

Speaking of the legal system, according to you, which laws every woman today should be aware of?

Laws against domestic violence and laws related to sexual harassment at workplace, etc.! When you are aware of laws, you are better informed as to how to deal with such exploitation.

Dealing with all these cases, what is your perspective on the police?

In my personal experience, I have felt that what is needed is to motivate police. Now, you can either sensitize them about these issues, or you can threaten them through complaints. We often have to adopt either or both of these ways, depending on the situation. We have also praised the police when we found that they have worked hard to provide justice to the distressed women.

Has your family always been supportive?

Yes! Let me tell you a story. One of the teachers of the university was ill-treated by her husband. Things got worse between them; later it was found that she and her 9-year old daughter were murdered by the husband. I am deeply saddened that even after being a part of RUWA, she never came to us! Anyway, so her husband made it look like some robbers broke into the house, murdered the mother and the child, stole the jewelry, and left. The teacher’s bank account details showed that each month, the husband transferred her salary into his account. We knew something was wrong. We didn’t believe the robbery story.

She took a pause before continuing further, and I sensed what was coming ahead was a different angle of the story.

My husband is a renowned advocate. Co-incidentally, he took the case from that man’s side. When I came to know of it, I instantly asked him to drop it. We don’t interfere in each other’s profession usually, so the topic was closed. It was morally a very difficult and challenging situation for me. I knew this case was wrong. I was determined to get him to drop it. So, I fasted for three days. My husband saw that I had become very weak, and I was adamant to not give up. So, eventually he did. He returned the cheque and dropped the case. Interestingly, RUWA approached my husband to take on the case from the girl’s side, which he did, and we won. The jewelry was found in that man’s office locker and he was proved guilty.

How do you think the women in Rajasthan have evolved over these years?

There have been changes. Certainly! One good thing is that the middle class is awakening. The girls of middle class are being taught, are being cared for, and are becoming independent. But the lower class is still choosing to stay clawed in social evils such as dowry, child marriage etc. I think you need to stay determined. I, myself was firmly against dowry at the time of my marriage, and so has been my daughter. The boys today should be taught to swear to discontinue this tradition. There needs to be a change in mentalities, which is, yes, slowly and steadily, seeping through.

It was disheartening and strengthening at the same time, to have heard the stories of few troubled women across Rajasthan and how they dealt with their harsh situations. Many of them got justice, but sadly, some of them bore irreversible consequences, like that teacher and daughter.

If you are facing exploitation or discrimination of any kind, or know someone who is, contact RUWA at their helpline: 0141-2609757.