Dr. Nitasha Kaul Speaks In ‘Future Tense’ On Kashmir’s Resistance And Women’s Role In It 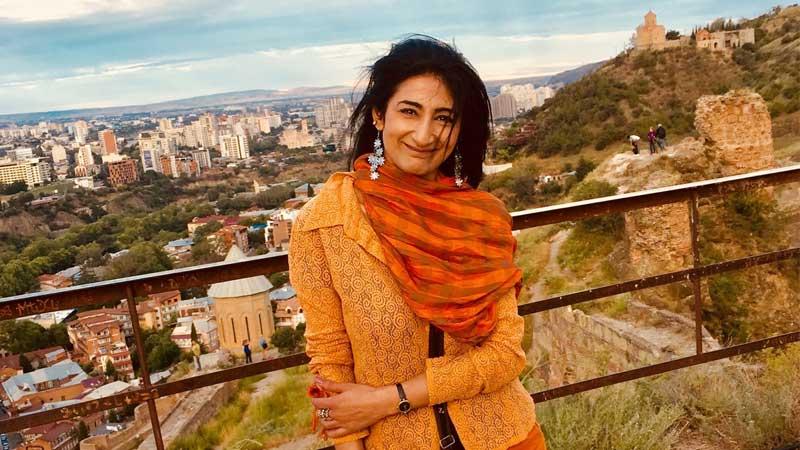 The beauty of the land doesn’t shade Kashmir from conflict. Just as the warmth and struggles of its people don’t shield it from discord. But “there isn’t one Kashmir but many”, says Dr. Nitasha Kaul, whose most recent novel, Future Tense, like many of her previous works spans and centers around the Paradise on Earth.

Dr. Nitasha Kaul is a ‘Kashmiri novelist, academic, poet, economist, artist,’ who currently lives in London. Her first novel Residue was the first English novel written by a Kashmiri woman and was shortlisted for the 2009 Man Asian Literary Prize. Future Tense, her most recent novel, is structured around various characters ranging from a son of a militant, an aimless bureaucrat, a young student, the granddaughter of a spy, and more. Yet, as Dr. Nitahsa points out, “they (characters) are positioned differently in the matrix of time, space, and institution that makes for the context and the resistance in Kashmir.” So yes, “this book was always intentionally going to be written about Kashmir. Right from the cover of the book with its barbed wired font indicating suffocation, to a bird that is attempting to fly, to the color, and then inside to the stories that it tells, it is deliberately and intendedly meant to be about not just different characters that could be placed anywhere, but specifically about the characters that do have a deeply personal relationship to this particular place which is Kashmir.”

In what ways do women’s stories intersect the narrative and what role do you assign to them as a narrator?

Dr. Nitasha: All voices in stories that intersect in the novel, are relevant, but women’s voices, in general, in any overarching narrative tend to be more marginalized. Also, stories tell us something about how power works because if you really want to see how power works you have to see it from the point of view of those who are on the margins and those who are experiencing it at the peripheries. In that sense, many women have that subjectivity that is marked by an outsider-ness, or an insider outsider-ness, and I think that for that reason women’s voices are important to center. Both women’s voices, as in women who are writing these stories, but also women’s stories in stories that are giving an insight into worlds are less written and spoken about. Also, all too often in literature, I think women are characterized in relation only to the men. And a surprising amount of cultural output, in fact, the most part of it, actually does not have women’s conversations in works of fiction or films that are not about men or about their relationship to men. After Residue came out I realized that my novel did pass the Bechdel test. So certainly, of course, this novel does too, because I am keen that we do not look at women only through their relationship. And this gets even more exacerbated when we talk about zones or lives that are marked by conflict.

But there are also a number of other characters in the book. How does each of the characters contribute to the meaning of Kashmir’s resistance?

Dr. Nitasha: One will have to read it. I hope that it should become clear to people reading the book that the role of say a bureaucrat or student or someone who has a complex history of intrigue that is linked to a conflict, provides the different ways to understanding the structure of a place that is driven by different competing interpretations.

Yes, there is probably no other place that is ‘driven by different competing interpretations’ like Kashmir. Though Kashmir is a large conundrum of so many things, the imagery fabricated by the machine of mass media, how would you best describe it yourself?

Dr. Nitasha: Kashmir is this imbroglio and there are so many narratives on Kashmir land mined with vested interests. Kashmir is always seen in two orientalists polarizing ways that I discuss in detail in my 2010 piece ‘Kashmir: A Place of Blood and Memory’, Kashmir the beautiful and Kashmir the cruel. The representations fluctuate between these polarities thereby, denying people a reality that is not always extraordinarily exquisite and exotic nor always completely utterly cruel, brutal, and savage. It’s somewhere in between those two polarities. In terms of how to best describe it, it’s the people and the many stories that go back over millennia. Of histories that have washed over it like waves and each wave having leftover, its residue on the land, on its people and on the architecture. And all of those traces of history that add up to making this present place, which is for so many people just a latitude and longitude or a dotted or solid line drawn on the map. The other non-statist, non-possessive, non-dehumanizing way of looking at it is as a place lived in by people who have suffered death, disappearance, violence, and division; and so much effort that has gone in both blood and ink to keep the conflict alive. And this is tragic because one would want to write about so many things in a world where tragedies were not so urgent every hour of the day.

Probably this is why Future Tense has been described as a work of political fiction. Did you have to self-censor the book to make sure it sees the light?

Dr. Nitasha: I think all fiction is political but yes, in this case, it’s explicitly a work of political fiction because it’s fiction ventriloquizing certain concerns. I wrote this book in the aftermath of the events of 2016 in Kashmir. I did not self-censor myself, I don’t think I would and that becomes quite obvious given the context of my work. I also have to acknowledge the understanding, maturity, and care of everyone who was involved in the editorial process. Of course, we had a lot of back and forth, we had to think about every word and every sentence but we were not compromising.

Yet, realistically how much truth can a political writer afford in India today?

Dr. Nitasha: Speaking truth to power can have an impact on the reception of creative output. But I would not be surprised if speaking truth to power, especially in contemporary times in India, not just India, has an impact on the perception of what a person says. Nonetheless, that makes it even more important to say these things. In most totalitarian systems, there have always been stories that have been told that have gone to the very heart of the questions that need asking.

And questioning need not always be about standard expressions. Her visit to Wroclaw in Poland last year is a case in point. Statues of dwarfs are across the city, because if one looks at its history, “people were not allowed to speak up against the system. This subversive act of placing dwarfs in different places gained a symbolic meaning and it became a form of protest.” Dr. Nitasha continues to make another point, about “the role of fictionalizing and using absurd sort of devices in fiction” to make the points that need questioning. She hopes that readers when they read her book, especially towards the latter part of it, will be able to see that writers find different ways of saying things and making people think.

But speaking up against the dominating power of the land can have its consequences. What then, according to you, are the consequences of telling the truth in today’s India?

Dr. Nitasha: The attempts of telling the truth in India today are severe, grievous, and tragic if things continue as they are for the future of constitutional principles, human rights, and people’s freedom. To those who view my work and what I say publicly, would know that I won’t surrender. There are different forms, genres, forums that one speaks at and I am very willing to squarely stand behind my words. Truth-telling is an activity that can be pretty revolutionary, whoever does it. Also for any individual person that does it, it is also something that collectively reduces the risk for all to do it, because the more people that are there that ask the questions that need asking the less difficult it is for any one individual.

What do you think is Future Tense for Indian Democracy?

Dr. Nitasha: Indian democracy at the moment is undergoing disorientation of the senses and tenses (to borrow a line from the book). One doesn’t know what the future will bring. But it is vital that every effort be made to amplify the voices at this point in history that are striving to hold the fort for human dignity, for rights, for not dehumanizing and colonizing people, for not destroying the best versions of an idea of a country. Freedom cannot be conceptualized without the capacity of freedom of others.

Finally, no discussion about Kashmir can be quite complete without taking a look at the recent political happenings. With the lifting of Article 370, what does Dr. Nitasha have to say? In fact, she has extensively written about various political and social matters and some of her related works can be viewed on her website, too. Her decade of work ranges “from articles for a broad readership to academic work that looks at Indian obsession with Kashmir and does a feminist critique of it. It looks at the significance of gender in terms of cartography and discourses of possessiveness to looking at the idea of Kashmir or the role of the youth.”

And so Dr. Nitasha finds it hard to summarize but emphasizes that “it is just not in the aftermath of August the 5th2019 that I have said things.” However, “the significance of this political move firstly, is the question of consent and dissent. People’s consent has not been taken into account and their dissent has not been allowed. That in itself is pretty significant for something that is ostensibly democratic. Secondly, it is the use of a very colonial style of the rhetoric of liberation and development, the idea that these people don’t know what’s good for them and in effect giving people a choice between development and freedom. What non-colonial exercise of power actually asks people if they want to be developed or be free? As for me, that’s pretty fundamental of how that question of consent, dissent, the choice between development and freedom, all this adds up to the essentially sordid, vitiated, and toxic nature of what has been done for very narrow political profit to a people who did nothing to deserve this. And the repercussions of this as we see are continuing to be felt not just in Kashmir and Kashmiris but on eventually, India and Indians because one cannot transact with that level of brutalization without actually losing one’s sense of self.”