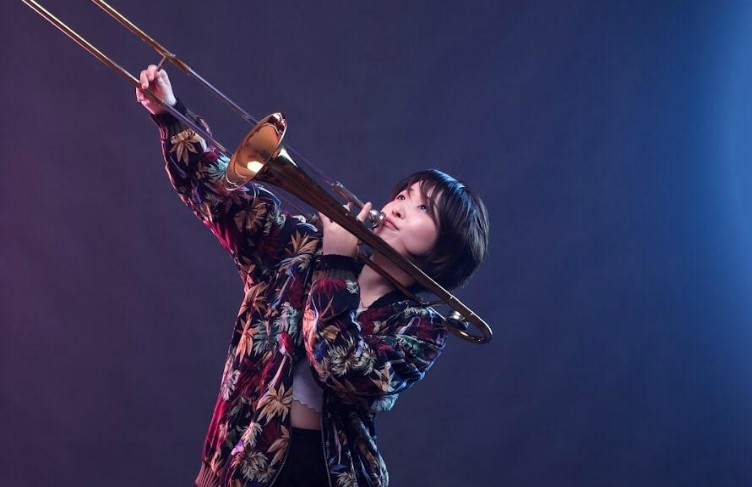 “Wherever I am, music allows me to connect with people. Listening to my heart, playing instruments and making beautiful harmony – that’s how I want to live my life. I want to keep focusing on myself, appreciating the present situation, respect other people and keep creating music,” Chie Nishikori shared with Indian Women Blog.

It was with this positive mentality that Japan’s Chie Nishikori landed in India seven years ago and today, she is living her dream of performing on stage as a trombone player. Part of a band, Chizai, in Delhi, Chie has established her identity as a brilliant female trombone player in India. As of now, Chie resides in Japan and comes back to India, now and then, to assist her band.

Of all the instruments, what about trombone attracted you specifically?

In Japan, we have a culture that students can learn music, sports, cooking, drawing cartoons, etc., after ordinal classes. So, I had started playing brass instruments when I was in elementary school. I joined a brass band and started learning the “Alto Horn”, followed by learning “Tuba” in high school. When I entered college, I wanted to continue “Tuba” but then there was no “Tuba” position in the jazz band, which I wanted to try. After Tuba, the next lower range brass instrument is “Trombone”.

One of my seniors, a very good trombone player, spent a year teaching me how to play the instrument. At the age of 20, I finally became a trombonist. Since then, the trombone has always been my primary choice as I believe that it is the most unique and expressive instrument.

So, when did you decide that India should be the platform on which your talent grows?

I used to do busking in Australia, in Tokyo I used to work with an American Law firm, I used to teach basketball to kids… so my career is quite mixed. The only thing I wanted to try when I turned 30 was going outside Japan to work. I was searching for a country where I could begin my career and India seemed like an interesting choice since it has a lot of scope to develop.

Good choice, Chie! But in one of your earlier interviews, you mentioned that you faced racial bullying in your initial years in India?

I remember people calling me “Chinky” in a funny way. At the time, I had zero idea about what it meant. But even when I did realise its meaning and that it actually amounted to racial bullying, I was not bothered much, as what matters is how I am regarded by people close to me, not what total strangers think of me.

In India, instruments like the trombone are considered being suitable to be played only by men. What would you like to say to those girls who are yearning to play the instrument yet hesitate due to the patriarchal mindset of society?

It was very surprising for me to know that there are no women who play this instrument in India because, in Japan, a female trombone player is not at all rare.

I just find it to be very sad that there are girls who cannot pursue music because of such unjustified reasons. All I can say is that I have learned from Indian musicians how music should come from the heart. Many of my Indian musician friends, teachers, and people around me taught me this beautiful culture, so this proves that a positive mentality exists. That, for me and every girl, should be the hope that spurs them to strive to achieve their dreams and not let society to gender-stereotype their talent.

We often see that when women are outnumbered by men in a particular setting, the chances of them establishing their credibility becomes tough. Being the only girl in your band, have you ever faced something like it?

Oh, I think I never felt this in my band. Rather, my band members have always made me feel like home and we are a family now.

Amazing! So, is there any upcoming show you are getting ready for?

We are preparing a show in The Piano Man, Gurgaon, on July 27, and will be inviting violin and flute players from Japan to collaborate with them.