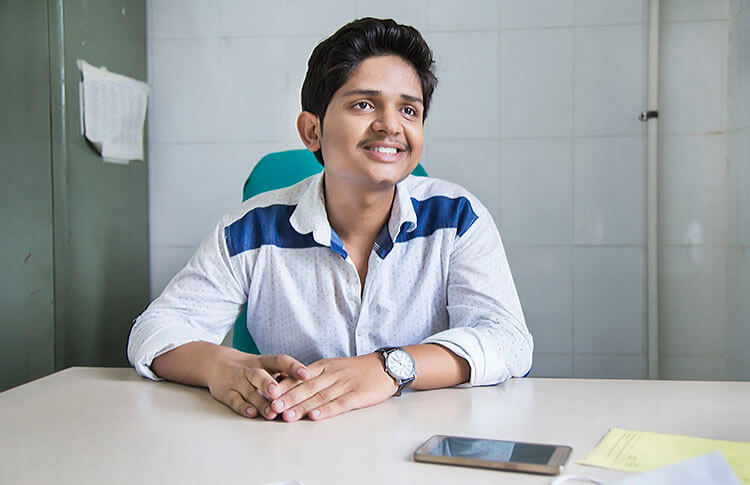 Rajasthan’s first ever Human Milk Bank: Jeevandhara, also known as Breastfeeding Management Centre, has a male member of the team and during our visit there, we were snooping around trying to figure out how a male fits in this women-oriented scenario.

Read on our chat with a twenty-something Vinay Sharma of the Jeevandhara team!

How did you end up here?

I work as a manager who operates the entire pasteurization process here. I manage reports; take care of the demand and supply of breast-milk, and supervise its storage.

So, what are your educational qualifications?

I have a degree in B.Tech, Electronics, and Communications. Now pursuing M.B.A.

Even though I have been a management student, the first thing that popped in my head hearing M.B.A. was our campaign: Masters in Breastfeeding Administration. I guess that’s because I’ve been knee-deep into it since the past month. Of course, this guy was talking of Business Administration.

But I am still eager to know one thing. What made you join?

It is, undoubtedly, a women-oriented Institute. But it is also the first in Rajasthan and the second in India, which makes it a latest and emerging avenue. And being in Jaipur, I am getting to be a part of this noble cause. What could be better than that?

Were you ever shy or hesitate a bit in telling your family, friends, relatives about where you work?

Nope! I think of it as a child-saving foundation. You know, the monthly infant mortality rate of this hospital has steeply declined from 35 to 18 ever since the initiation of Jeevandhara. I am proud to be associated with it.

To be honest, when I asked him this question, I was expecting at least some faint signs of shilly-shallying, but to my surprise, he answered with utter confidence and pride. While I am keeping up with being honest, let me also admit that we found his quality of being un-shy of his association with the Breastfeeding cause, impressive.

…also, the Milk Banks in Kolkata and in Switzerland have male managers.

So, despite the technical stuff, I am sure your work must be entailing various emotional aspects. Tell me about them.

I interact with the husbands while their wives donate breast-milk or receive guidance from the counselors. Sometimes, these husbands are nervous and don’t know much about the process. So I talk to them, answer their queries, explain to them what happens inside the room and how it will help their wife and child. When the need is, I also explain to them the importance of breastfeeding management and breast-milk for the baby.

I can imagine that they might feel more comfortable sharing their concerns with you.

…but there is also a sensitive side to it. When their baby is ill, and god forbid, if it dies, I sympathize with their loss and try to offer them the much needed emotional support.

As you were telling me, many of the people don’t know much about this cause. How do you plan on increasing awareness?

Jeevandhara was inaugurated on 26th March 2015. It hasn’t been very long, so yes, people are not much acquainted with it. Our counselors go in for bed to bed counseling, and we are also planning on spreading awareness through flexes, banners, documentary, etc. Let’s see!

*Chuckles* I believe that is a characteristic that runs in the blood of every Indian male.

After I get free from here, I take some rest and then go to indulge in this favorite hobby of mine: playing cricket!

And that was our tete-a-tete with Jeevandhara’s Manager Vinay Sharma.

During ongoing Breastfeeding Week, I came across a lot of men who shy away from the mere mention of the word ‘Breastfeeding.’ Dear men, be inspired from this gentleman who isn’t just working at the Jeevandhara wing, but also fiercely promoting the cause.

Hah! I finally found the right reason to use the hashtag: #BeingAMan!

This article was first published on August 7, 2015.