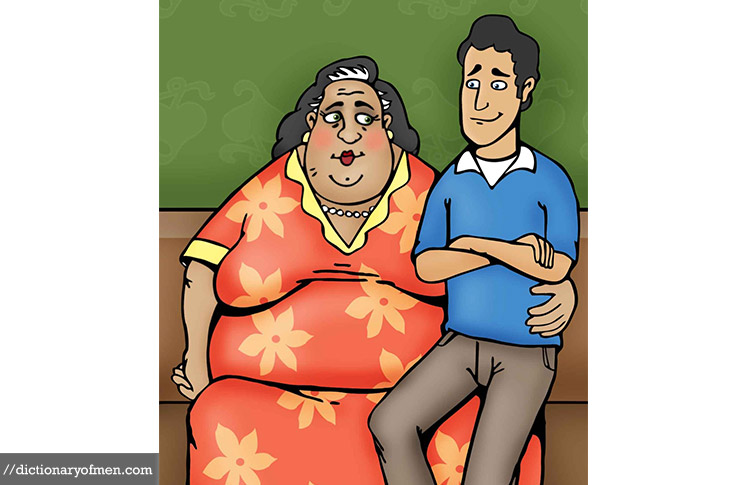 Uh oh! I kinda don’t like this sudden inquisitiveness of my father, as he speaks on the phone with some unknown person.

“Papa kya fix kar rahe the aap?” I ask cautiously once he is done with the call.

“Your next date beta, and guess what? This guy has nothing to do with writing poems. Apparently, his mom doesn’t like shayaris!”

WTF! This ‘quick fix’ of Papa leaves me in a fix.

After my ‘not-so-poetic’ date with the 8th wonder of the world Akshay Rana, I had cleared it to dad that from now onwards I will carry a pepper spray to dates.

I groan, “Kya Papa, what if he turns out to be a different kind of weirdo?”

Seriously, just because he is not into shayaris doesn’t mean that he couldn’t have any other ‘burning passion.’ (What if he turns out to be a fan of KRK?)

EEEKKKSSSS! I shudder at the thought.

“Arey the guy is the son of one of the friends of Jaishree aunty. She says that apart from being quite rich, Rehan is also very obedient to his parents.”

Hmmph…I suspect that my father has managed to patao my mother with his shayaris (again) and has convinced her of this trial and error method of choosing guys.

I look at my mother, and she gives me a reassuring smile.

I am officially DOOMED!

“Both of you are meeting at his house today evening.”

OMG, what could be worse than a ‘house date?’

Ah, only if I knew then that I was too naïve.

Of daily soaps and obedient sons

Umm…did I ring the doorbell of the wrong house? Instead of my date for the evening Rehan, a middle-aged lady with a business-like expression opens the door.

“Come in beta. You must be Drop Pati. I am Rehan’s mother.”

OKAY! I am even more confused. Is this a date with a guy or his entire family?

Still surprised, I blurt out a hasty “hello aunty,” when we are interrupted…

“Mummy, come here, the naagin is about to win the fight with the icchadhari mongoose.”

“Chalo beta, let’s go. Today is the climax of the serial,” says Rehan’s mother as she hurried away inside.

As I hesitantly follow Vinita aunty, (that’s the name of Rehan’s mom; I am not ready for the sight that greets me.

A huge LED television is blaring, on which some Hindi daily soap is playing where comically dressed characters could be seen with some eerie background music playing in the background.

“Beta this is Rehan, our laadla baccha,” announces his mother.

The guy sitting in front of the TV looks completely out of place wearing a terrible looking green suit (yes you read it right), his formal ‘attire’ making no sense in his house and with his mother towering behind us, I have seriously no idea as to what is happening.

“Hi, how are you doing?” he asks me, before looking at his mother.

“Beta, ask Drop Pati about her likes na. You should find out what all things you have in common.”

Hullo, is this a date with Rehan, or Vinita aunty?

“Err…Rehan, what is that you are watching on the TV?”

“Actually I am a big fan of daily soaps. This one’s called Icchadhari Naagin. Mummy says that this is the best serial right now on TV. And, I love it too.”

Chalo, after hearing that answer, I am pretty sure that it won’t be long before I get out of here. This might just be the shortest date yet. I thank the makers of icchadhari Naagin for helping me make a quick decision.

“So do you like this suit? You know, mummy handpicked this for tonight’s date.”

“Frankly, Rehan, I don’t think that this green suit, Icchadhari Naagin, and house date thingy is working for us.”

“Why beta, wouldn’t you like to know each other?” asks an anxious Vinita aunty.

“Mummy says that we should know each other,” Rehan repeats in a robot-like tone.

Now, I seriously think that Rehan was a big fan of the game Simon Says in childhood. As he has grown up, he seems to have replaced Simon with Mummy.

So, with Vinita aunty still breathing down our necks, I decide to take things in my hand.

“Ok, Rehan let’s see what’s common between us. You like Icchadhari naagins, and I like Game of Thrones. Don’t you think that explains a lot on how mismatched we are?”

“What’s this Game of Thorns beta, like some new kind of card game?” asks a curious Vinita aunty.

“You know mummy has made her and my favorite Rajma Chawal for dinner. Mummmyyyy..,” and he hugs his Pyaari Mummy.

God, why didn’t papa mention that my date will involve snakes and a man-child who is a momma’s boy?

“Yess…The naagin is killing the mongoose. Did you see that mom?” ignoring me completely, Rehan suddenly leaps from the sofa in jubilation. Both mother and son then start discussing the strategies that the poor (now dead) mongoose should have used to win.

“Hey, why that sudden change in the background score. OMG, mummy the mongoose is not dead. There’s more fight left,” both Rehan and his mother now have their eyes glued to the TV for the “climax.”

Idea (Na not the sim card)

Rehan is too engrossed in the serial to notice even me. So, this crazy idea crops in my mind.

I go and purposely stand in front of the TV with my face towards Rehan and Aunty.  However, they crane their necks to see past me and shoo me off to move aside. Ufffffffff!!!!!!

“I am also a dheet,” I murmur to myself.

“Rehan! My favorite color is black. What’s yours?”

“You are blocking the screen, Drop Pati,” Vinita aunty says a bit angrily.

Aunty gives me a cold look, “Rehan ko pink bahut pasand hai. He always gets pink sarees for me. Now will you move away?”

“Wow, kitna sushil beta hai.” I mock with an undertone.

“You know what else I like? Trekking! And my dream vacation spot is Costa Rica….” And I go on and on until the time the stupid serial is finished.

It seems that Rehan might burst into tears, “Mummy, look the episode’s over. Now we will have to watch the repeat telecast tonight at 2:30 am.”

“Yes, I know beta. And, it’s her fault,” and she murmurs something in Rehan’s ears.

As I walk towards the main door, I see Rehan still sitting on the sofa, surfing other channels, and Vinita Aunty follows me.

And I just walk off towards the waiting cab.

Okay, I know he’s not a bad guy, but it was clear that he had no interest in me (or any other girl for that matter. He’ll take some time to grow up. No hard Feelings). To tell you the truth, I was a bit disappointed. I know I have no interest in the boys that my dear dad chooses for me. Still, the little corner of my heart has some hope left, that amidst the frogs that I meet, I shall find my prince. I have started enjoying these dates now. Because with every wrong guy I meet, I know I am a step closer to my meant to be.

After narrating the whole episode (Not of Icchadaari Naagin) with Rehan and his mom, I go back to my room and drift to sleep. *Fairytale dreams*