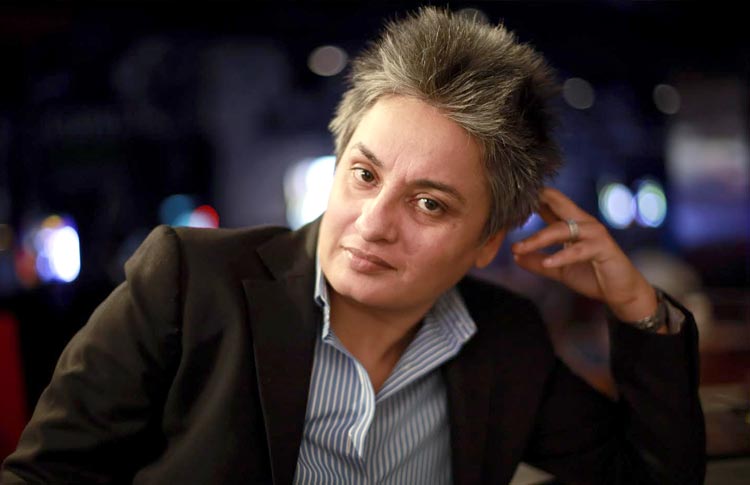 From intelligent humor to ‘Tinda Badal’ for kids to giving out political messages, Vasu Primlani‘s stand-up comedy is one-of-its-kind.

Comedian Vasu Primlani @greencomedian takes hilarious jabs at the new trend of renaming Indian cities. You want to keep the sound on for this. https://t.co/51rR0FZrU7

Vasu may have gained popularity for her comedy, but she’s also an environmentalist, B-school professor, Corporate Trainer, Triathlete, Somatic Therapist, and a Children’s Rights Activist.

Vasu founded an NGO, Thimmakka’s Resources for Environmental Education, which provides environmental consulting services for restaurants. For her contribution, Vasu received the California Governors Environmental and Economic Leadership Award in 2003.

A child sexual abuse survivor herself, Vasu also works towards rehabilitating and rebuilding the lives of rape survivors, people with autism, and other survivors, who have been through trauma in their lives.

In 2015, Vasu was graced with the prestigious ‘Nari Shakti Puraskar’ from the Government of India for her contribution to society.

In a conversation with IWB, she talks about the many facets of her professional and personal life like never before.

As a child sexual abuse survivor herself, Vasu addressed in an interview that in a few cases, a child might not realize and perceive the abuse as a ‘play’ at the time as they are not mature enough to understand the consequences, the physical and emotional damage that the perpetrator is causing them. Nobody talks about this aspect and thus, a child who has been in the similar situation experiences greater guilt and blames him/her/ze for the act more than others.

How can we address this to make child abuse survivors believe that it was never their fault?

I wrote this article Enjoying Your Rape. It addresses this aspect in length! I had being raped from when I was five years old to when I was seven years old. I grew up hating myself, and would actively punish myself (how many of us know of a friend in school who would write on her inner thighs with a compass?), all because I did nothing to stop the rape. There was pain, and there were times when it felt good. I didn’t know what was going on, but I knew it was a SECRET.

And now, years later, having gone through a lifetime of healing from that consistent abuse, and being a somatic practitioner myself, this is what I have to say to you if you had been molested or raped as a child OR as an adult, You are not to blame. And you are NOT to blame YOURSELF. I’ll tell you why.

Reason one: if a jewelry store is robbed, does the police go the store manager and say, ‘it’s your own fault, why did you have them out in display cases’?

Reason three: Let me ask you, if you are a 23-year-old woman, and a 7-year-old, or a 17-year-old comes up to you and says, I love you, want to be with you, want to marry you, what would you say? Would you ethically say ‘no’? In this situation, whose responsibility is it to say no? He is, after all, giving his consent to you. What percent responsibility is it? His 10%, yours 90%? Or is it yours 100%? See, the law states sex with persons below the age of 18 constitutes statutory rape. Even if they are giving their consent. For the same reason, persons below that age can’t operate heavy machinery or drive: the law doesn’t consider them old enough to be able to know what consent is, to give it responsibly. It is ONE HUNDRED PERCENT the responsibility of the adult to keep the child safe. Or anyone vulnerable, safe.”

Later in your life, did you ever confront the person who abused you as a child?

No, he left suddenly one day. All I remember is that his name was Manoj and he had a mustache.

You have also opened up about your disappointment with your father’s reaction when you told him about the abuse, at 21. How did it affect your relationship with your father and other family members? How has it evolved over the years?

I let him have it. You can’t talk to your daughter like that when she is telling you she had been raped. Thankfully, I was American enough then to tell him off. He’s learned to respect me since then. Before then it was his version of love, which started with pitying me. My father and I have been always very close, even after his death. He will always be the greatest man in my life, and the first man in my life.

How did the abuse affect your outlook on relationships? Do you think that it still affects you?

It affected it tremendously. I was unable to trust men or women. It took me 27 years to realize something was wrong with me; I felt like a time bomb waiting to go off. I wouldn’t know what would trigger me off. Now I have those memories, but they don’t affect my present relationships.

Share your experience of being the first openly gay comedian in India, from rejection to acceptance to reflecting on it on the comedy stage.

I’ve had some ridiculous responses from comedians in India, from physically hitting on me constantly to another comedian saying, ‘oh I thought when you said you were gay, you would sleep with everyone’. Some comedians make some lovely jokes on me. On the personal front, my family has always treated me and my love with honor and respect; they have given her the same respect they would accord their son-in-law.

Your comedy isn’t loaded with the usual abusive language, the regular Indian family jokes, or the redundant comparisons between men and women. What inspired you to take up comedy and that, too, of a completely novel genre, at least for the Indian audiences?

I like to use comedy for social messaging; for it to have more meaning than just slipping on a banana peel. And, I have a loyal set of followers who appreciate intelligent comedy.

In what ways does ‘Tinda Badal’ reflect your childhood memories?

Not at all actually. I wanted to create a character who was the most fun-loving and colorful, who could teach without appearing to teach. Who would be silly, lovable, and secretly very wise!

There are these stereotypical boundaries for how an Indian woman should behave and lead their lives. The women who ‘dare’ to cross these boundaries have to face backlash. Tell us about your experiences with the haters, misogynists, sexists, and the ageists. What’s your response to shut them all for best?

Lots of sexism, ageism. Just see the comments in my Delhi Men Vs Mumbai men video on youtube.

Once I was walking down the street in New York and was followed by a small group of men. Is that a girl? Is that a boy? And this was my answer that still holds true to this day: I am a woman and more of a man than you ever will be.

It takes a lot of effort to make someone laugh. It ain’t easy being a comedian. What’s your favorite muse and how long do you take to research and develop your scripts?

That’s true. Jokes are like lovers. Some come in a second. And for others, it takes years to really get them. That said, the demonetization series and the Doklam video were developed in two hours.

How do you encourage more women to take up comedy as a career?

I think the gender ratio is more skewed in comedy than in engineering in India. Women just need to up and do it and stay committed to it despite the internal groupism among male comedians.

Tell us about your backstage ritual that you do before your performance.

Just enter, and reach out to the audience’s heart.

One Indian woman comedian that you feel has a lot of potential.

If you get your own comedy show, what would you like to name it?

My mother, I think.

What’s the one joke about you that you never get tired of telling?

I think an audience favorite is when my mother slapped me.

P.S. You can watch all her videos on her Youtube Channel, Vasu Primlani here. To know more about Vasu, visit her website, here.

This article was first published on September 6, 2017.