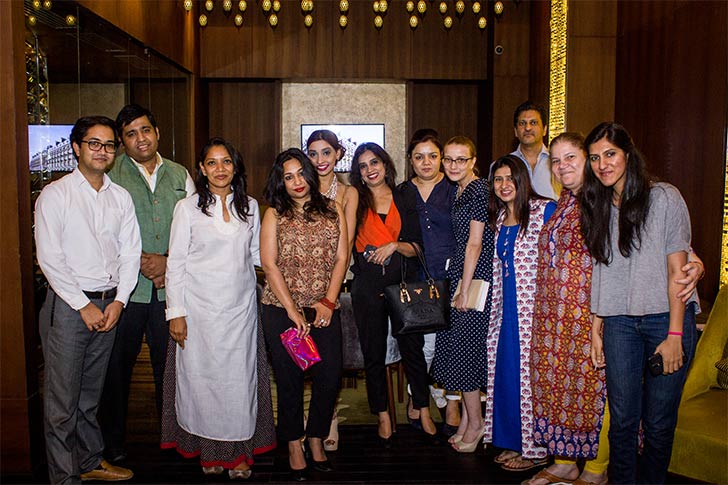 “The tide is high, but I’m holdin’ on, I’m gonna be my number one.” Those might not be the exact lyrics, but that’s just how I feel right now. Yesterday’s business lunch with Surabhi Dewra of careerguide.com at Hotel Hilton had lifted my spirits and doubled my speed of working.

The business lunch felt like an amalgamation of all the motivational songs. For example, when Surabhi said, “I’m a rebel and that’s my biggest strength,” I felt like a moment of revelation had hit me and I could hear in the background, “Haan yahi rasta hai tera, tune pehchana hai. Lakshya ko har haal me paana hai.”

As I pushed a french fry inside my mouth, I heard a clink of glass when Lady Boss Ana said, “Now that we’re all here, let’s introduce us by raising a toast to our strengths!”

It began with The Imperial India Co. Franchise owner, Samesh Chhabra, “I raise a toast to today’s event. Having been in retail for the past 25 years, I have seen the earliest stages of retail in Rajasthan, over time. Now, I’m exploring online presence with my new multi-brand store.”

Gitanjali Kasliwal, the founder of Anantaya Decor, introduced herself, “I’m a trained architect who runs four stores of Anantaya, two in Jaipur & the other two in Bangalore. Through Maahi Roj, a ten-day showcase of heritage and crafts representing ethical fashion and lifestyle products, we bring the craftsmen into the Indian Heritage Facade. My current target is to bring a million artisans together.”

Archana Surana, founder, Arch Academy of Design, said, “I still feel like a startup. Everything has really changed since the first time I picked up a piece of chalk in my hand to teach. I began with an undergrad program, and today I’ve started the second branch of Arch in Gurgaon that does require as much effort and dedication as a startup.”

Ankit Lodha of Jewels of Jaipur explained his plans of taking the jewelry brand to the next level through online business.

Ramniyata, Arch Academy of Design, talked about her role as the HR at recruitment and entrepreneurship cell of the institution.

Winfred Crawford introduced herself as the behavioral skills coach, while also going side-by-side with an NPL training academy.

Ranjana Bhandari, an aspiring entrepreneur, and Jaya Rajawat, the Fashion designer, rang the glass louder than others and raised the toast to the new roads and prospects that they were pursuing online.

The moderator for lunch, Surabhi, then shared her story, “I happen to be a girl from Hyderabad who became an engineer by chance. I did my graduation from BITS Pilani in Electronics, but if you ask me to fix the fuse in my house, I won’t be able to do it. I always wanted to be a teacher and realized much later that it was my dream career, too. It’s funny how destiny plays a role in your life.

I pitched my startup at a reality show and was blatantly rejected on the national television by a certain investor. Imagine how difficult it is to change opinions of people about you: I managed to do it. The same investor, a year later, funded careerguide.com.”

The trail of motivational songs continued in the background as I heard a round of applause for Surabhi. She continued, “As a woman entrepreneur, you have to dedicate yourself a little more than your male counterparts to show that your career is not merely a hobby to you.”

While Surabhi was clearly putting her A-game forward, the delicious Cream of Broccoli Soup was served at the Hotel Hilton.

“Every entrepreneur should learn to delegate duties correctly to their employees. As entrepreneurs, we need to learn to clean our tables after a certain time. Yes, a certain kind of work might take you an hour, but your employee, three hours. And, that’s really okay. Also remember, you just want to delegate the duties, or the formula, too?”

A question was raised from the participants as I tried hard not to ‘surrr’ my hot coffee. “We train them, and then they disappear, it’s so much of a waste of time and our energy. In the end, we have to begin from the start, and it certainly is a vicious cycle.”

To which, Gitanjali added, “Your core team will always be around, put the more edgy and pushy kinda stuff on the fresh employees so that an easy collaboration is possible.”

The table was cleared by the attentive Hilton staff. While most of the women had eaten their lipsticks off, and put on some wisdom, some fading moods were evident.

“Don’t worry, we got you covered,” I mumbled. There lay a Colorbar Basket full of rainbows at the table to fix their entrepreneurial pouts! But first, SALAD TIME!

Archana shared the biggest mistake she’d ever made, “Delegation is one thing, and handing over is another. And I think if there is a gigantic mistake that I’ve ever made, it would be handing over my business. I felt that the person I was handing it over to, wasn’t mature enough, and didn’t have any integrity. ”

Surabhi also added, “We all go wrong with our leadership skills somewhere if we think we are not able to manage things. The more you spend time with your employees, the more you learn how to deal with them.”

Winfred continued, “There are some decisions you have to make, and there are times you have to trust your employees, too. You can’t do without trusting them, and also your clients.”

She had a point, I laughed with delicious half-a-Paneer-Kathi-roll in my mouth that was served to the team behind the scenes, by the empathetic Hilton staff, who know how mouth-watering it can get to watch the food made by Chef Janveer get devoured. “Manners, woman,” I told myself. While photographer Pallav was trying hard to get my expression, I turned my face around, while almost choking.

Lady Boss Ana, who was also amongst the one who didn’t get a seat with the participants, looked at me with stifling her hunger-expressions, and was probably thinking, “Will bash on you, later.”

As the third, and the main course, the layered cheesy veggie heaven was served, and the participants rubbed their bellies, the photographer Pallav was forbidden from clicking, or who knows if he was eating away the fries in a corner!

Surabhi shared tips on creating the startup visibility on the internet, “I might go to the Jewels of Jaipur website, Ankit, and really like a piece of jewelry, but to compare, I’ll visit ten more. At the end of it, I will remember what kind of jewelry I liked, but not the name of your website. The footprints our customers leave can be used for our own good by getting their phone numbers and adding them to your mailing list. There exist apps on the internet that monitor the behavior of a customer on their website that can help you with re-marketing once your customer is away from your website.

But, how do you make yourself different from the others? By way of content, graphics, and images, you create an identity. For example, if I’m buying a Van Heusen shirt, why should I buy it from your store and not somewhere else? That’s where your USP & marketing strategies come in.

Blow your trumpet, and don’t be modest when it comes to marketing. Talk about it as much as you can, after all, there is a story behind every product, which is another way to keep the visitors engaged.”

Phew, so much wisdom, I think I need something to eat.

And, I wish I’d thought of owning an Audi Q7, maybe that would’ve come true, too, because right then, enter: a slice of opera cake. Yummerz.

Before closing the talk, Lady Boss Ana brought out her Colorbar rocket lipstick and said, “We are all launching our rockets in the sky, and our startups should get colorful. Tell us how you fought with your startup blues.”

Samesh: Then, why do you need finances?

There was a fit of laughter that filled the room. As they launched their lipstick rockets, they bid goodbye to all their doubts, too.

Before the group-fie, we picked the spoons as mirrors and selected our favorite colors from the Colorbar basket to fix our lipstick. With clear faces in the Hilton spoons, the pouts seemed even more prominent, fearless, and bolder.

P.S. Winfred happened to be a huge loyal fan of the Colorbar Lipstick.