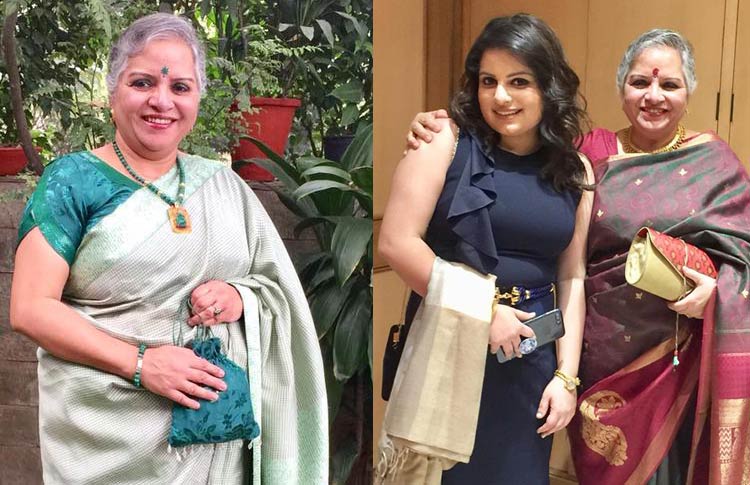 “Four hundred saris! How on earth do you manage to fit them in just one-and-a half closets?!” I exclaimed as soon as Chinna Dua gave me the green light to shoot. “Oh dear! I have a stack of uniqueness in my stash! It comes in handy.”

As I’ve never been a fan of the six-yard cloth, considering it something that serves to only restrict you, I often forget the graceful elegance it adds. Recently, when one of my friends (who is crazy for saris!) showed me scores of pictures of a woman elegantly draped in the most gorgeous saris, I felt my jaw drop, and all I could say was, “WOW!”

A radiologist by profession, Dr. Padmavati Dua is more commonly known as Chinna Dua, and inundates her Facebook account with sari selfies. And here’s the amazing part – she owns close to 400 saris! Does she have another house where she stores them? Not giving much stress to my dear brain, I decided to contact the enigma here. Excerpts from our chat:

Do you remember your very first sari?

Oh, yes! I do. From the time I was 40 days old, there was this Bengali family, our next door neighbor, who took an immense liking to me. So much so that I used to spend more time at their place than in my home. Every birthday and Durga Puja, I used to receive clothes as a gift from them.

I was studying at Lady Irwin School, which had a Bengali section. On Basant Panchami or Saraswati Puja, there would be a big celebration in school and many girls would wear a sari and come to school. I too wanted to wear a sari for the puja. So when I was in fourth standard, Mr. K.D. Gupta, the gentleman whom I used to address as “Mama,” who was the head of the Bengali family, brought me a peach-colored sari with zari from Kolkata, which was a small sari, specially designed for very young girls. Though I was too young to wear it, I was elated all the same.

We hear that your husband, Vinod Dua, is a sari lover as well. When did he gift you a sari for the first time?

The day after our wedding, we were going to meet some relatives, and he bought me a very beautiful printed cotton sari from Lajpat Nagar. It was this vivid shade of red. I had put it out to dry on the balcony railing after a wash and, unfortunately, I forgot to remove it at night. In the morning, I realised someone had stolen it. I still sometimes despair that I no longer have it.

Let’s come back to the big number here – 400 saris! You must have them from all over India!

I do! Let me name you a few. Phulkari from Punjab, Madhubani sari and Bhagal Puri sari from Bihar. I have a large number of saris from Assam because a senior colleague from my erstwhile place of work, would visit her daughter in Assam and bring saris from there and I would buy them from her. Next is Kolkata, as I grew among Bengali families and friends, so because of their influence, I bought many saris and also it meant I had many of them gifting me the most gorgeous saris! *laughs*.

Hence I have Taant, Dhakai, Tangail, Jamdani Saree, Begumpuri, and Dhonekali saris from Kolkata. Since I hail from Tamil Nadu, I have a lot of Kanjeevarams. Kashmiri saris and saris from Orissa are also in great numbers in my closet.

As a journalist, initially, Vinod had shooting assignments in various states and quite frequently in Orissa. He would bring me the prettiest saris from there. I also have Lucknow’s Chikankari saris, and many saris from other states too.

Oh my! That felt like a tour of India in under three minutes! Is there any state that is not part of your collection?

Goa. They have these traditional saris called Kunbi, which kinda disappeared from the market in the middle. They’ve been brought back recently and I wish to buy one on my next visit.

Another addition to your fantastic collection! So, which one of them would you call your favorite?

One? Nah! I have so many of them and I like them all for different reasons – colour, design, embroidery, sentimental value – every single one of them has a story attached to it.

Oh, here is a funny one! Once my husband had been in Chennai for a shoot and he bought a Kanjeevaram sari for me. And it was pretty unique one too! Till then, Kanjeevaram with embroidery hadn’t started and the one he bought was amongst the first ones! It is off-white with a maroon border and very beautiful embroidery all over.

So, for the entire duration of four days that he was there, we would talk on the phone every day and he would say,“Itni sundar hai yeh sari, ki kya bataoon, I can’t wait for you to see it!” He would say this to me every day! On the last day, he said, “Chinna, you have no idea what a gorgeous sari it is that I got for you. Itni sundar hai ki mera dil kar raha hai ki main isay odh ke baith jaaoon (It is so beautiful that I’m tempted to wrap it around myself)!”

Aww, so cute. So, Chinna, the wedding season is finally here and who better to dish out some styling tips than you?

I have this unconditional love for handloom saris, even though the generation today prefers all these net and synthetic saris, saying the former would make them look like an aunty. So, my first suggestion would be to go for the variety of handloom saris available as it, undoubtedly, remains the classiest. Aim to be different and elegant.

In handloom, you can go for light Benarasi saris. Benarasi georgette with zari is easy to wear, drape, and has elegance woven into it. Then go for a contrast-coloured blouse. Experiment, girls! Accessorise your jewellery, like go for long necklaces or just some pretty long earrings. And at last, being the biggest advocate of bindi, I feel that wearing it with your traditional attire will spike your beauty infinitely. From the age of 17, I have been handcrafting my bindi using liquid bindi. I draw inspiration from motifs on my sari/blouse.

You were a part of this Facebook group called ‘Six yards and 365 days.’ Tell us about it.

Well, it all happened thanks to dear friend Vijayalakshmi Chhabra, who was my husband’s college mate. She was the one to invite me to the group. I had invites from so many sari groups to join them. However, I wouldn’t ever open any of these pages, let alone post anything. Then, one day, Vinod and I were invited to dinner at her home, and as I was wearing a sari, she once again reminded me about the group, saying that I would find it really engrossing and exciting to post my pictures in a sari on the group. That’s when I accessed it and started posting regularly.

I did enjoy it for few months till the behavior of the admins forced me to retaliate and I was deleted from the group. However, I have no regrets.

Not really. ‘Three hundred and sixty-five days’ doesn’t have to be taken literally. It is basically having an attitude of making it a part of routine wear and not reserved only for special occasions. I plan it according to my comfort, like if I have to go to the INA market or if it is raining, jumping around the puddles or bunching your sari to save it from getting soaked is not an ideal setting. Even while travelling, I prefer to wear something other than a sari. Trousers and top, salwar-kurta or pants, jeggings, long skirts, I wear them all.

You have this unique way of storing your saris, how did you come up with it?

Earlier, I used to keep them on hangers in my closet, but with time, as the number of my saris increased, space was not enough. Then I started stacking them, one above the other, but that idea failed too, as when I tried to take out one sari, it would disturb the rest. Imagine battling this mess in the morning, that too when one is rushing to work!

I am very meticulous and organized; so naturally, this irritated me to no limits. As they say, one can find inspiration anywhere. I remembered that in hotels and beauty parlors, the towels, instead of being hung or stacked, are rolled up and then kept in stacks. I decided to try that on my saris, with my maid helping me out, and voila! It was so convenient and easy to arrange. Earlier, it used to take days for me set my closet during the summer to winter and winter to summer transition, but this technique allowed me to do the same in two hours.

But what about those delicate zari saris or heavy-work saris? Won’t they get spoiled if kept in this manner?

They sure will. I use these sari boxes made of satin, which have transparent plastic on one side, allowing you to view what saris are in it. So, the delicate ones go in them. Each box takes about six to eight sarees.

Ingenious! Any more tips on how to take care of saris?

The first and foremost thing is that one should have is that inherent love for them. Don’t let it drag on a muddy ground or forget that you have a pallu to look after and let it get entangled in places where it ends up getting torn. Lift your sari and walk on stairs or muddy ground.

Now the tips! This happens to me that I always tend to drop some food on my sari. *laughs* If that happens, just soak a cloth in soda and clean the area with it immediately.

Sometimes the ‘immediately’ can’t happen, and if it is an oil stain then put talcum powder on it later. It will stick to the areas that have oil. Leave it for the night and in the morning the talcum will either fall off itself, having absorbed the oil, or you would just have to turn it over and iron it and then it’ll fall off. Always check your sari for stains after you take it off. Check the region of the fall where all the dirt sticks. Dry clean or wash at the earliest.

You take such good care of your saris. If it were up to me, I would certainly borrow saris from your great collection.

You’re more than welcome! In fact, my daughters, Bakul and Mallika, have worn many of my saris, generally the lighter ones. They simply adore my saris and often give me suggestions on how to accessorise them. Many a time, Mallika suggests the kind of blouses to get tailored and matched to my saris. My daughters also get blouses tailored for themselves, to match my sarees. They are my constant admirers.

In matters of life, you’re the more experienced one, so what piece of wisdom have you shared with them?

Both Vinod and I have humble upbringings, coming from families that faced tough times. I won’t say that we were either poor or extravagantly rich, but yes, carelessly spending money was not one of the things we learned.

We always tell our children that while we may have given them a tad more than what we got, they should keep their feet on the ground and have a balanced thinking even if they themselves taste success.