Can Women have it All? We Ask Jaipur Women. 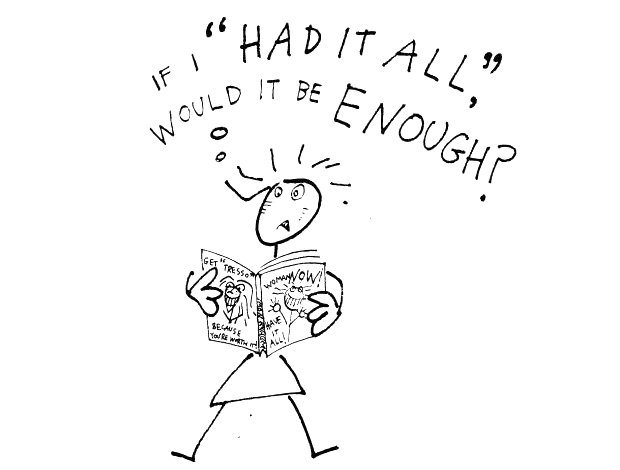 Can a successful working woman also expect perfect happiness from her family and love life? Is it possible to maintain the optimum balance between career, family and love without being missing out in any aspect?

Recently Indra Nooyi, CEO of PepsiCo, triggered a new debate when she said that ‘women cannot have it all’ and spoke about the self induced sense of guilt that she has to come terms with constantly throughout her life. The disturbing fact that Ms. Nooyi, who is a role model to so many women and who solely through her immense hard work and dedication is responsible for the meteoric rise of one of the largest corporations in the world, suffers from such a misplaced sense of guilt made us delve deeper into this matter.

We have interviewed the leading gynecologist and surgeon Dr. Simmi Pokharna, noted educationist and businesswoman Mrs. Shipra Bhutani and Mrs. Rainu Singh who is the executive director of DISHA – A Resource Centre for Disabled; to know more about their trysts with success and self-guilt.

JWB: Can women have it all in respect of career, family and love?

Dr. Pokharna: I think that it differs from person to person. In a generic way, I would say that no. Such is the patriarchal nature of our society that it is very difficult for a woman to be everything at once and yet not raise some eyebrows over it. She can maintain the perfect balance between all the spheres only when she is fully supported by her family.

Mrs. Bhutani: I don’t think so. It is not because of any inherent flaw in the woman. But due to the fact that there is a lot of opposition against her when she wants to break the shackles of conservatism in our country. Many times I have seen that it is taken for granted by the family members – no matter how much a woman successfully balances her career and family. People see that she is not fulfilling her responsibilities. As long as this mindset will exist, it will be difficult for a woman to believe that she can have it all.

Mrs. Singh: I think that at some point compromises become necessary if you really want to make things work both ways.  Although, I must say that in the past twenty years the scenario has greatly changed in a favorable way in our country for a working woman. I believe that with the spread of education there will come a day when it will be no longer impossible for a woman to have it all.

When asked about the term ‘work life balance’ and its relevance in day to day life, the ladies told us almost unanimously that it simply means chalking out a schedule to find time for both work and family.

Mrs. Bhutani points out that the discrimination against women stems out from the fact that in our country girls are traditionally raised to look after the household and to be married off to another family, while boys are perceived to be the sole bread earners. In a sharp contrast, it is very evident that the same questions about balancing the outer and inner world is almost never asked to a successful man. When you are working hard but not being appreciated for your efforts, self guilt may arise, says Mrs. Singh. Such guilt can cause depression and if not reined soon can be self destructing. To counter this sense of guilt, a woman has to go on a journey of the self-discovery and ask herself that whether it is justified for her to feel such guilt.

JWB: Have you ever experienced the self-guilt? How did you cope?

Dr. Pokharna: Since I am a doctor, I have to often work late. At the beginning sometimes it did feel bad that you are not able to give time to your children, but I have gradually learnt to balance between the two facets of life. I always took my family in confidence in matters when I had to give my profession a higher priority – and they understood.

Mrs. Bhutani: Before opening Quantum Career Academy, I was a housewife for six years. I think that the only guilt that I feel is over the fact that if I had started my venture six years earlier, then I could have been able to contribute a lot more to the society. I feel that feeling of the self guilt will take a person to nowhere and that this is why we must first go through a journey of the self discovery. The other day my son came to say that as a part of a project of his school, he had to write an essay on his role model and he wants it to be about me. That was perhaps the most rewarding feeling and the biggest of my achievements till date!

Mrs. Singh: My family has always been very supportive of my passion with Disha, and I always knew what I wanted from life. I must say that the only method to cope with such feelings is through open discussions with the family and more importantly yourself.

The role that a man plays in the life of a woman is very crucial. As Mrs. Bhutani puts it ‘how many men in our contemporary society are capable of looking beyond a woman’s looks and consider her as an equal?’ Undoubtedly, a rare phenomenon, but this is a man who makes the work-life balance much easier for a woman, according to Dr. Pokharna. Mrs. Singh believes that the age old saying of ‘behind every successful man is a woman’ is also true if we see it the other way around. She considers the younger generation very lucky because through her interaction with the gen-next, she has noticed that there is an attempt to put an end to the gender discrimination.

As we wrapped up the interview we requested these spirited Jaipur women, who have broken numerous clichés and excelled in life, for a message to other working women of the Pink city. This is what they have to say:

Dr. Pokharna: Never feel any guilt over the choices that you have made in your life. If you don’t stand by them then you are bound to slip into a sense of depression which will gradually destroy every sense of joy in your professional and personal life.

Mrs. Bhutani: In the western countries, there is a perfect co-existence between men and women entrepreneurs. To instill the same ideas in our country, it is of utmost importance that a working woman first learns to respect her own self and fight for the decisions that she has taken.

Mrs. Singh: Try to find out that which areas of work or family requires more attention and then work extra hard to minimize these difficulties. Moreover, it never hurts to open up to the people about whom you care whenever you face a tough situation.

These women have put their point. We agree with them – your determination to balance and your dedication towards both work and family – are the 2 keys to ‘have it all’. Do you agree?