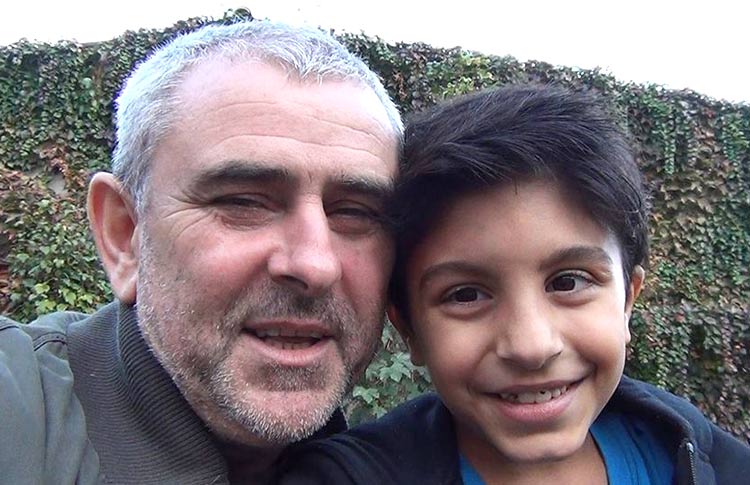 It takes courage to invite danger to come and sip a cup of coffee with you.

Our routines are simple. Heck, our lives are easier than they ever could be. A lot of people in different corners of the world want to be us. They’d choose to work as hard as possible every day over sipping coffee. And, you know why?

Because they are in a war.

When Sean McAllister started working towards making a Documentary film about a family in Syria, things were not easy. He was taken to prison with a doubt of being a spy. Back at home in London, his wife and three kids were waiting for him.

During the International Habitat Film Festival in New Delhi, team IWB got in touch with the filmmaker, whose film A Syrian Love Story was being showcased at the festival, to peep through the window of what Syria looks like.

How did you say goodbye to your children and wife before you left for a dangerous project?

Sean: It was always hard, I wouldn’t usually say goodbye when the kids were young, I’d just kiss them when they were sleeping and disappear the next day. I would always think of them when danger struck, though.

Finding the balance between pursuing my dream of making films and fulfilling the responsibility of a father never goes away. You always feel guilty and irresponsible, somehow.

The human tendency is to co-exist and move ahead as per the situation surrounding them. It is their optimism and motivation to live that keeps them going. Having observed war closely, how do you think the people in Syria use their humor to ward off the complexities of their daily lives?

Sean: I think during a war, people all over the world use humor as a great survival method. I remember a filmmaker making a movie after the fall of communism in Russia when food was scarce. Each day they’d have to queue for bread for 8 hours and sometimes not even receive the bread.

To pass the time, they would start making up jokes about the queuing in Russia. The short film really captured an element of humor over adversity. While holed up in a hotel in Baghdad in 2004, we would also joke to pass the time. I think the grim situation sometimes makes humor more difficult, but of course, ‘life goes on, ’ and people resort to humor in all wars to get on with it, for sure.

How has the war in Syria also bombed the love in the lives of its residents?

Sean: I think the war in Syria has shattered love, and birthed distance between its own citizens and the war-torn land. This is not how Syria had existed, love was a big word in Syria and generally across the Arab world, but the hateful and relentless bombing of the regime has shattered love now.

Sadly, many have also escaped the love of their land and of the ones that were closest to them. And in the meantime, they try to make peace with a new alien world.

An observation in the war conflicted zone that you just couldn’t shake off.

Sean: Seeing young children injured and dying, the grief and suffering of people losing loved ones, but most recently hearing grown men cry as they were tortured by the Syrian regime was very hard. For instance, being in a Syrian prison, and seeing what people do to each other is kind of sickening and sad.

We tend to keep children away from the harsh realities of life. Are you a similar parent?

Sean: I try showing my kids as much as possible without harming them. Most kids in war zones or generally in the Arab world see suffering and dead people regularly. But in the west, we protect ourselves from this.

If you talk about television, it bothers me that we tend to see and experience much more than we can ever show, but some people see this kind of stuff every day.

What role have your wife and children played in supporting you through the span of your career?

Sean: They let me be, and never ask too many questions about the specific dangers in my life. Even after being prisoned in Syria, when I headed over to Somalia, they supported my urge to explore, discover the ‘truth’ of what I seek without complaining too much, which I guess is which unusual. My kids are now growing up and looking back on the films quite proudly I think. I let them know that without their support I would never have made it. It’s a family effort really, and I try to credit them all at the end of the films for standing by me and having waited for me to come home.