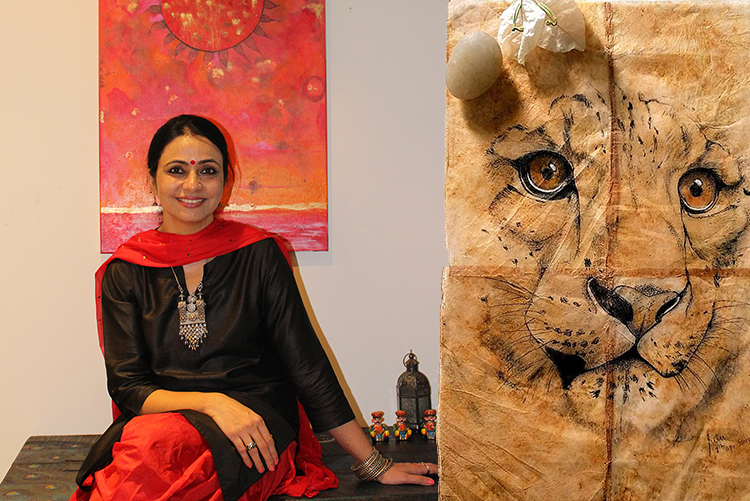 In the case of artist Ritu Dua, her affair with the concept of painting on tea bags began ten years ago during a brainstorming session. She was in Dubai and was preparing for the Art Dubai festival with ‘Go Green’ as the theme. All the participating artists were asked to come up with something that represented sustainability and voiced global-warming. While sipping on her hot Indian tea, she looked closely into her teacup only to comprehend how a beaten tea bag could be recycled creatively.

“I took the pen and started vectorizing my first drawing on the discarded tea bag. I still remember how unique the marks of the tea leaves looked on the thin sheet,” Ritu shares.

The mother of two started her career as a banker and later switched to teaching before she finally took to being a painter and mixed-media artist. Her passion for the arts came as no surprise to family and friends as it was something she’d been practicing alongside since childhood.

During the interview, Ritu told us that the tea bags are thinner than a tissue paper and are extremely delicate to undergo any art process. Although she knew she couldn’t do much on that texture, she still managed to find an alternative. “I knew for a fact that the longer you brew your tea, the darker the imprints get on a tea bag. So, I followed this trick every time before the next step began and, in that way, I could get beautiful tea stains on the sheet that only helped me enhance the artificial motifs drawn with pen/pencil even more,” explains the Pune-based artist.

Initially, Ritu began with pen and pencil, but as she never stopped experimenting, she understood that a wide range of mix media could be performed in her artwork. Today, she loves using charcoal, simple water stains, acrylic colors, markers, thread embroidery, etc. on her favorite canvas ever – tea bags. Not just for painting and sketching, this talent-house also uses tea bags to create (live) installations at art festivals.

Does she have any recommendation on which tea to drink and draw on? “Oh, I love all of them – right from your desi Kahwa to the English Black tea, and even the healthy versions like hibiscus and turmeric teas,” she answers. And while she puts the old tea bags to their best usage, she makes sure the tea inside is used as a natural fertilizer for her beloved plants. Don’t we need more artists like her who are dedicated to creating eco-friendly artwork?

Talking about her most memorable tea-bag artwork, she speaks of the time when she participated in the well-known Kala Ghoda festival, Mumbai. “I collected hundreds of tea bags from relatives, cafes, etc. to form one huge painting. To begin with, I cleaned and treated them of any fungal taint, after which dried them under the harsh sunlight. Next, I rip opened them so that they could be joined together to form one big sheet to draw on. I stitched and glued them together for days, as it’s a very elaborated, demanding, and intricate process. Once this was done, I got to painting on them. Sometimes an artwork like this takes more than six months,” remarks the award-winning and record-holding artist.

Talking about her another project called ‘Between Brew and Bin,’ Ritu says it was her way of appreciating and celebrating the finer details of growing, preparing, and brewing tea and in turn, paying homage to the hardworking tea farmers. She shares, “Isn’t tea the most healing elixir? The moment you take the first sip, you feel at peace. I, for one, begin to assume myself in the mountains, amidst the green and surrounded by clean water. It’s magical how teas can make you reach a mental space that you think is secure for your body.”

“Through the theme ‘Between Brew and Bin,’ I could bring all these relaxed emotions onto one common stage, with each tea bag narrating a story close to my heart…your heart. Imagine all the aroma, texture, warmth and comfort getting together to reflect the soothing vibes one might have gotten as a viewer,” she sighs.

It’s amazing how Ritu’s love for art as a child could get developed and transformed into a full-time career today. IWB thinks that this multimedia designer is not just extremely versatile when it comes to resourcing her raw material but also makes sure she contributes to the betterment of the environment by turning the garbage into a stunning piece of admiration. By acting responsibly, she’s indeed become an example for aspiring artists alike.

Just before we end our conversation, Ritu says something so heartening that the words are still resounding in our ears, “Trash is the failure of one’s imagination.” According to her, it’s not simply the financial independence that she seeks from her talent, but also emotional satisfaction which she gets after producing nature-friendly art.

By the way, she’s currently experimenting with filtered coffee grains and thinks the results are coming out lovely!