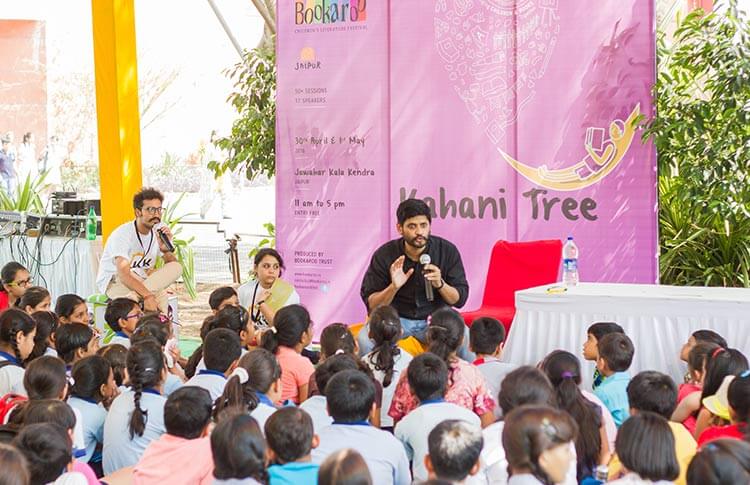 For the first time, Jaipur is hosting Bookaroo, a literature festival for children at Jawahar Kala Kendra on April 30 and May 1.

Disclaimer: The content below contains material that some readers might not understand or if thoroughly understood might make them nostalgic and rekindle the child within. So, children’s guidance is advised.

It looks like the Monster Hunt wasn’t enough for me. So, I decided to give myself a scary treat and attended Ajay Dasgupta’s storytelling session, titled ‘Bhoot!’.

His first story was about a ghost who failed his exams because he couldn’t scare people. Ajay narrated how he helped his childhood bhoot friend Taklu to become a scary ghost.

Alas! The ghost couldn’t pass the exams even after getting trained by Ajay.

And the ‘hawwww-hoooo-haaaaa’ of the kids began.

And everyone waved to Taklu. (I took my hand up to wave and realized I am an adult, and there are no Bhoots in our lives?)

I snapped out of my reverie and realised I had to listen to a story or three of Sandhya Rao. I rushed to the Amphitheatre, and reached, just in time. Phewww! (If I could, I would have attended all the sessions. Greedy me!)

After narrating a short story of a Green Engine Driver, she invited the kids from the audience to come up and tell a story. Many children raised their hands and fought with each other for coming up first. Many children came and told their stories. But, this one’s my favorite.

So, Vihaan came up and narrated this story of a demon.

“Once there lived a demon, so big, that everyone was afraid of him. He lived on a mountain and ate little kids. All the villagers went to their king and pleaded to kill him. The ministry of the king told him that there was only one sword that could slay him. He worshipped the gods for three months and was gifted that sword. However, when he saw the Big Demon, he got too scared. But there was no going back. He gained all his courage and took a step forward. He suddenly realised that the Demon’s size became a bit smaller. He took another step and again the demon became smaller. Now, he knew the trick. As he took more steps further, the monster became tinier. The king took him in his hand, pressed and killed him, merely with his thumb.

You know who was the demon?  Darr! (Fear)

The moral of the story is- Don’t be frightened. Face your fears and you will surely win. Thank you.”

I sat back and sank in the story for long.

You don’t need to be a motivational speaker to inspire people. Sometimes, the easiest of words and the simplest of stories explain the biggest truths of life.