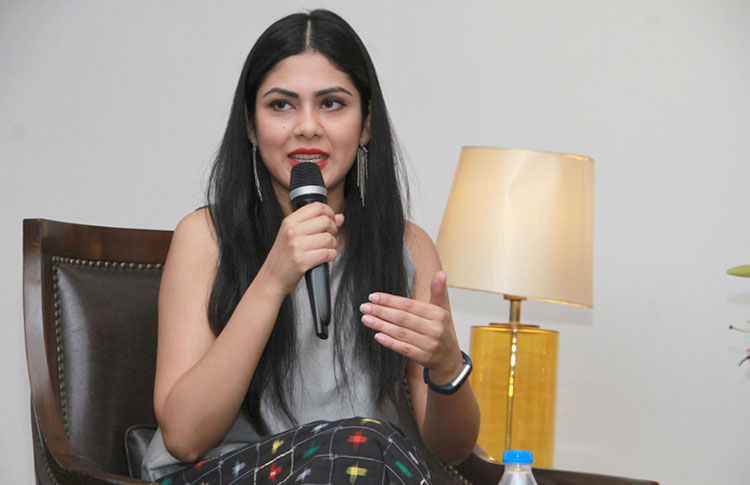 We’d speed past the ‘Economics,’ ‘Medical,’ ‘Fiction Thriller,’ ‘NonFiction’ sections back in school to finally arrive at the ‘Romantic Fiction’ shelves. The Cosmopolitans & the Feminas had been long-read, re-read, and mugged up.

Romantic Fiction was our favorite. Our teenage hearts were always racing for the boys who were developing beards. The 200-something-page books gave us a conviction that the crush would soon transform into the lover.

Ah, but it all changed when we grew up. Why? Oh, why did you lie to me, dear authors? Finally, I had one to answer this question for me.

Nikita, the best-selling Romantic Fiction writer, had always thought that she was going to write a book some day, and TADA! Today, Nikita is an author to more than ten books at the age of 25. She also happens to be a quick writer. Yeah, so much that first 6 books she wrote had been published in a span of only 2 years. Her latest book Every Time It Rains was released on February 12, 2017. Some of her other famous books include Like A Love Song, The Promise, Someone Like You among many other.

To answer how writing happened to her, Nikita said, “I ended up reading a book that was really bad, and, it was the 2010 wave of publishing bar being sort of lowered with those 100 Rupee books that anyone could’ve written but… better. I knew that I could definitely write better than that. I know it’s a funny story about how it started, but that’s how I wrote my first book.”

Nikita further talked about why writing isn’t the only thing she does.

“It’s believed that the final aim of a writer is to just quit everything and write a book, and it’s like a signal that you’re successful now. For me, it would never work. If writing was my main thing, and my only thing, I would never write.”

The characters in Nikita’s books are usually strong women because she has only had strong women around her, always.

“I knew from the beginning that my characters won’t be people who have no self-respect. It’s very strange that in the romantic fiction genre, there are only men writers.

It’s been a weird space for me. I don’t read the books they write anymore, but when I did, I realized that it was driven from a man’s perspective. They were also not the best men around! It’s funny because they just keep making mistakes and might not even be good humans. At the end of the day, they also get the girl. The girls come across as such intelligent, hardworking and smart people, then why do they fall for such men?

It’s so baffling to me that he’s doing all of these things throughout, and the guy agrees that she’s smarter than him. Then why do the girls go back to these men? I don’t get it.”

Well, Nikita, we don’t get it either. Maybe, that’s why we would fail to find the right connection with most romantic fiction novels. And probably, that’s why the crushes never became the lovers! Voila!

Me: One male character from your book that you fantasize about?

Nikita: JD. He is my exact opposite. I wouldn’t talk to strangers! I won’t be the person who’s very outgoing and boisterous. But, I’d like to be around someone like that. Someone who’s not reserved at all, and says what he wants to say, but, deep inside he’s such a genuine and honest person.

Me: Has it ever happened that you read one of your writings years later, and felt embarrassed?

Nikita: I don’t read any of my books. I don’t see the point of it because I was an editor before I was a writer, and I know that if I’m reading it, I’ll end up correcting it. It’s a never-ending process that might end up being worse than it was before.

Well, that’s true. It is extremely painful to go back and read what you wrote years ago. As we move forward, our style of writing gets polished and equipped with experiences that only YOU had.