Being Called A ‘Chakka’ Used To Offend Me, But Now What Matters Is Who I Think I Am: Model Swapnil Alizeh 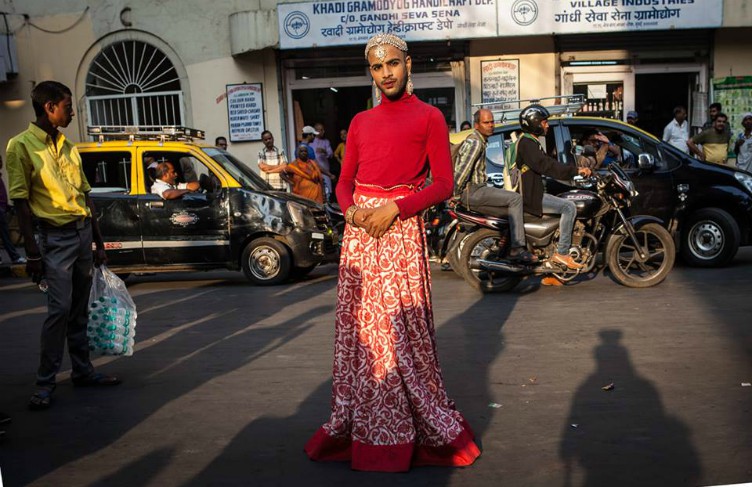 “I never thought that I am different from anyone. It was society that labeled me as an ‘abnormality’. As a child, I was shunned by my own family. I still remember the time when I was a kid and my elder sister was asking other children what they wanted to be. When she turned to me, before I could say anything, she just bluntly declared, “Oh, I know what he is going to be- a Chakka!”” shared poet Swapnil Alizeh with IWB.

Identifying as an “effeminate gay man”, Swapnil still lives with the dark memories of his childhood, of being bullied, sexually abused, facing taunts and being judged constantly, but he carries it all with the confidence of an individual who has found himself. Believing that his identity depends on no one but himself, Swapnil has established himself as a model and dancer.

While his journey till date is an inspiration in itself, he is also spreading awareness via his strong, thought-provoking poetry. Here are some inspiring lines from his latest poem, ‘Saree’, where he used the traditional Indian attire as a metaphor for the verbal abuse he struggled with through his entire life.

‘Make a knot of the taunts and slanders of people,

Then tuck that knot into the petticoat of your honor.

Consider the taint on your self-respect as the leftover saree

And wrap it around your waist in two full circles,

To make sure that you don’t stumble on the taunts hurled at you.’

His words, coupled with his earnest and sincere expressions throughout his performance propelled me to get in touch with this immensely gifted individual who thrives on hope and positivity, no matter what the world throws at him.

Your poems convey the pain of someone who lived through being ridiculed for who he is but now takes pride in his identity. Were you always this confident in your skin?

No, in fact, my childhood was horrible, my school was equally bad where I was severely bullied for the way I behaved. My family was never supportive and they still don’t approve of the fact that I wear makeup or that I dress up. I can’t really hope to change their set views of 60+ years when people of this generation haven’t accepted that gays, lesbians, transgenders, queers are human beings worthy of having rights as well.

The man who loves to wear sarees teaches how to drape a saree. But is this Marathi poem really about saree? Written & Performed by: Swapnil Alizeh Music by: Baksheesh Singh Curated by: Nishit Jariwala Shot by: Nishit Jariwala, Priyanka Bhatt Shot at: YouTube Space, Mumbai

Earlier if someone used to call me a chakka, it would hurt me, offend me. But now, it doesn’t matter what others call me, what they label me as, as what matters is who I think I am.

Now, that’s called confidence, something which is highly evident in the way you carry yourself wearing a saree. Your Instagram pictures are inspiring enough, but how about styling tips on how to wear a saree?

Your question carries the answer, Apeksha. Wear whatever you wear, with confidence, flaunt it like a star. If you’ve confidence, you can rock any look, even if it is a man wearing a saree.

True that. But, as a child, you were forced to ditch your natural inclination and not show your emotions as ‘boys don’t cry.’ How have society’s definitions of femininity and masculinity affected you?

It took almost 17 years for me to express that I like men. That pressure in my childhood of being forced to not express myself has left me unable to cry. People have taunted me so much, hurt me to such an extent that today I can’t find relief in letting it out via crying.

209 Likes, 9 Comments – Swapnil Alizeh (@girlwith_a_beard) on Instagram: “”A piece of jewelry is often a piece of art. But it only becomes valuable when emotions are added…”

The influence of patriarchy is so extreme that people just refuse to accept that apart from the entire concept of LGBTQIA, there exists a ‘she’ in every ‘he’ and a ‘he’ in every ‘she’, that everyone has both characteristics in them. People go out and say that they want equality between male and females, but what about the other genders? I say that stop tagging genders here, strive for equality between all human beings.

The stigma around the LBTQIA community is too severe. But do you think that since section 377 was scrapped, things have taken a positive turn?

I still have to hide myself in many places, keep my mouth shut. Right now, I live in a chawl and if a modeling shoot comes and I am getting late, I can’t possibly leave my house wearing makeup because people would literally rape me on the streets. As for Section 377, it was mainly in place to deter what the law terms as ‘unnnatural sex’ between two people of the same sex. The advantage now is that earlier we did it with the fear in our heart of ‘what if we are caught’. People who caught such a couple would loot them by threatening to call the police, so that is over now.

204 Likes, 9 Comments – Swapnil Alizeh (@girlwith_a_beard) on Instagram: “Life becomes easier when you have mantras to turn to-words of wisdom so reliable you can refer to…”

But even then, if today I fall in love with a guy, I can’t marry him because the law still denies that right. If tomorrow, I want to adopt a kid, I am not allowed to do so. Even now, when a lesbian woman, a gay man or a transgender is being abused on the streets, tell me which law is covering them?

174 Likes, 2 Comments – Swapnil Alizeh (@girlwith_a_beard) on Instagram: “I am just a person, standing in front of my phone, hoping for a cute match to eat pizza in my…”

Our legal system is working at a very slow pace when it comes to forming laws for the rights of the LGBTQIA community. In these trying times, it is the support of their families that is very crucial. But as you have experienced, that doesn’t always happen. What would be your message to these parents?

Put yourself in your child’s place, would you appreciate it if your parents had rejected you, not appreciated you or had abandoned you for something as important as you fighting for your identity? No, right? Then how can you do the same to your child, just because they are not fitting society’s bill of being normal?