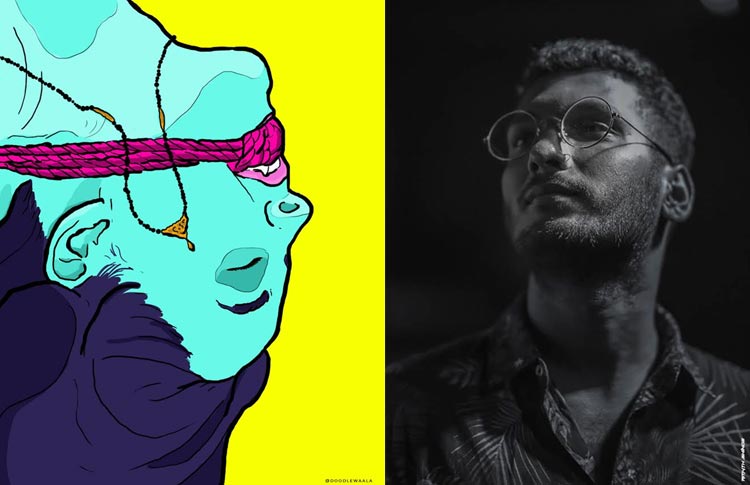 According to this Pune-based artist, he tried portraying the real emotions of an Indian bride during her first wedding night. “I am sure every person, irrespective of their gender, has got fantasies in their mind. I am still not sure why women, particularly in India, are supposed to hide these feelings and behave as if they don’t enjoy a good sex-life,” questions Danish. A year ago, when he asked the same question to himself, he ended up painting a postcard showing a new bride enjoying her orgasm. BDSM-style.

During my conversation with this young artist, I could read other questions that were boiling inside his head as he said, “I don’t understand the word ‘Sanskari.’ Also, why can’t women with Sanskar have a rocking sex-life? Many women in my circle enjoy role-playing. They like dressing up and putting on the leather belt. They like bearing the hunter while guiding their men to the bed. I believe there’s absolutely nothing wrong with it.”

He adds, “Sadly, it’s a taboo in our society and not everyone speaks about it openly. Hence, to break the barrier, I made three illustrations showing women in bridal attire enjoying role-plays. Why bridal attires? Because my muses couldn’t wait no more.”

Of course, the series has provoked various kinds of reactions. From a ‘Whoa’ to a ‘WTF,’ he’s received it all as DMs. But the most special reaction came from his mother who had never heard of BDSM before *high-five, aunty*. Danish remembered, “When mom saw my work, she was taken aback. She was expecting a son who draws portraits and sceneries. She didn’t expect female body-parts popping-up from my drawing book. But thanks to that, we had a real mother-son discussion wherein we talked about our culture that hasn’t given enough space to its women to express their desires. Mom even raised the topic of consent telling how countless husbands force themselves on their wives every night. It’s plain sad.”