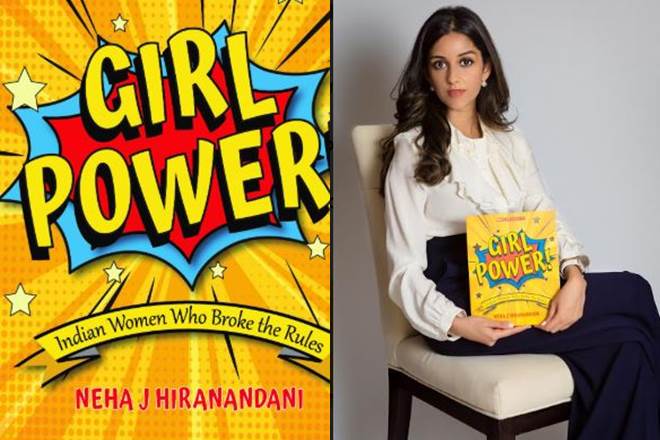 A damsel in distress, stuck in her long overflowing tresses, waiting for Prince Charming to do the needful – seems a bit too passé, doesn’t it? Especially, in our times today, when women are beginning to finally find out that they have the potential to do and achieve anything they want.

Interestingly, it is not only now that women are coming out on their own, shattering stereotypes and entering professions that are deemed ‘male’ dominated. In fact, throughout time, examples of the exemplary women are scattered in the realms of history, some forgotten and some remembered well.

Neha J Hiranandani’s book ‘Girl Power: Indian Women Who Broke the Rules’ was an attempt to introduce to her daughter the great women from India.

“It makes me more aware of the norms that I had forgotten about! When Zoya and her friends ask me things like “Are boys really faster than girls?” or “Is it true that boys are better in maths?” or “Why aren’t there more male teachers in school?”, it reminds me of norms that I have either forgotten about or internalized to such a degree that I don’t question them anymore. But just as importantly, having a daughter makes me want to contribute to a more equitable world where girls don’t have to live with these patriarchal norms. And even if they do, they should have the tools to question and counter them!” says Neha in a chat with IWB.

‘Girl Power! Indian women who broke the rules’, is about 50 Indian women who stand out for their sheer determination and stature. Every chapter in the book introduces one of the quotes by the women. What is the author, Neha Hiranandani’s favorite quote?

“HarshiniKanhekar is India’s first female firefighter. She was applying to Fire Service College; the men thought she was lost and looking for the Post Office next door! But she became the first girl to be admitted to the college and said, “No field of work belongs to any gender,”’ she tells us in a live conversation on twitter.

The book has some known and contemporary personalities, such as Priyanka Chopra and PV Sindhu. But then there are also the likes of Queen Abbakka and Ismat Chughtai who were much ahead of their times.

As Neha Hiranandani points out, “I have relearned about the glory of Indian women through the ages, especially from some of our forgotten heroines! And there was so much to discover. You will meet a spy princess who parachuted into France, a warrior queen who defended India from the Portuguese six times! There’s Subhasini Mistry who worked as a maid before winning a Padma Bhushan for healthcare, and Chandro Tomar, popularly known as Revolver Dadi.”

Finding feminism in the rebel girl

So yes, the rebel girl has fascinated our imaginations for long. Unfortunately, society makes a rebel out of a girl who simply wants to live life on her own terms and leaves her with not many options other than breaking its rules. “Feminism continues to evolve with time. Look at the different avatars that girl rebels assume as we take our place in the mainstream with humor and spunk! I think the world now knows that this isn’t a ‘phase’. Girl rebels aren’t here to play, we’re here to stay!” says Neha. And for sure, we agree! But what is the role of the rebelling girl in feminism in India? How do we see a way forward for the movement here?

“Feminism in India is deep and strong. Feminism is part of our historical heritage; look at the lives of our warrior queens like Jind Kaur and Rani Abbakka. It is etched in every far corner of the country from Dakshayani Velludan who fought for her rights in Kerala to Manju Devi from Rajasthan who convinced Indian Railways to employ women coolies. Feminism is the hallmark of rural entrepreneurs like Pabiben whose traditionally-woven bags now feature in Hollywood movies!It is in every sinew of sportswomen like Mary Kom who says “When I started, they said boxing is not for girls. But I want to show them that I can make history for India’”, says Neha, rightly summarizing how feminism and the rebel girl in many ways go hand in hand.

Why boys need to read about Girl Power?

As Neha points out, ‘there is no force more powerful than women who stand for and with each other’, but how much can only rebellion help to give every woman and girl the power to make her choices? Shouldn’t men and boys also change their way of thinking? We ask Neha that isn’t ‘Girl Power! Indian women who broke the rules’, not only an important read for girls, but also for boys?

“I think this book is critical for our young boys,” replies Neha. “For far too long, our boys have seen Indian women defined by their relationships – as mothers, wives, daughters. It’s critical that they see us in all our glory! And succeeding in places that were traditionally demarcated as ‘men only’ zones – as wrestlers, as scientists, as entrepreneurs. Giving that we are living in a time where violence against women, mental, physical, sexual, is so ubiquitous, I think books like Girl Power open up conversations about respecting women as equal stakeholders.”

Similarly, when we look at the current political problems in our country, especially in the times of CAA and NRC protests, how can Girl Power redefine the meaning of political resistance?

To this Neha reminds us of how even on our streets and in protests, it is the power of girls and women that has been shining bright. “These dark times have seen an emergence of Girl Power. Who can forget the fearless women of Jamia, Ayesha and Ladeeda, defending a student as the police tried to assault him? For several weeks, that image came to define the power of young India – unstoppable and unafraid.”

Finally, on summarizing the experiences of the incredible women in her book, what is the one recipe that she can come up with to smash the patriarchy?

“Invest in girl education!’ retorts Neha emphatically, “it’s the closest thing that we have to a silver bullet.”

Sure we do, because educating and empowering our girls is the best shot we have. As for society, well, let us hope that there comes a day soon when rebelling or breaking rules is not required for women to succeed and follow their dreams. Instead, society learns to lay out equal opportunities and equal choices, irrespective of any differences, including that of gender.

‘Girl Power!’ though a children’s book will resonate in its spirit and importance for its unique content. A book that tells the stories of 50 Indian women through illustrations, definitely lays the foundations of a generation that doesn’t necessarily have to identify themselves as the damsel or the distressed. To that, we all say, more to girl power!