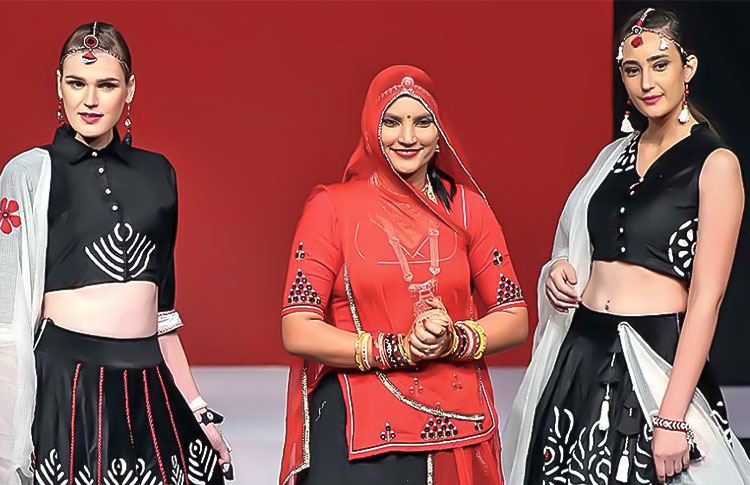 We all carry a story within us, the story of which we are the writer, the protagonist, and sometimes the narrator, too. Not one emphasizing on a definitive beginning and end, but on the journey that we live weaving one moment and experience at a time. Try listening to yourself closely, the next time you find yourself talking to a friend about your day, or sharing about that life-altering incident, and you’ll know exactly the kind of narratives I am referring to!

Speaking of life story, it is believed that while genes, upbringing, and societal conditioning together shape an individual’s life, but there exists no scale that can measure the impact of these aspects in isolation. Thereby conforming to the belief that every individual is unique, and their life is what they make of it – the story they dream to weave.

Ruma Devi’s journey, if were to be narrated anonymously, would be that of ‘a 30-year-old woman artisan from rural India who fought patriarchy and broke the shackles of society creating employment for thousands of women in her district’. But does that suffice – would it not spur curiosity for more? Why did she have to do it in the first place; what were her struggles; what kept her motivated; how does she see her own journey. To drive my point home – learn more about her ‘unique’ story from but her perspective, and in her own words.

My first introduction to the young dynamic woman was that through a TV screen. Those familiar with her name know that I am talking about a show (the one hosted by the legendary film actor Amitabh Bachchan), which happened to be the dinnertime companion of many Indian families. In person meeting with her confident and intelligent self had me in awe!

On a bright sunny morning, I sat in the hotel lobby with my colleagues and my mum, who had specially come to meet Ruma Devi. Tall and elegant, she walked in a little later, adorned in a beautiful brown lehenga and yellow drape; a traditional dress of Barmer and creation of the designer herself. Compliments and talk around which became the unintended ice breaker, and we moved on to talking about her work and life, whilst reminiscing the gone years – past plays an important role, doesn’t it? “There’s always something to learn from the days of struggle, but nothing comes out of sitting over bitter memories. Life is to be lived, and it can only be done looking forward,” she put it in simple words smilingly.

Married at the age of 17 and losing her first child due to financial insufficiency in affording the medical treatment, instilled in Ruma Devi the vigour to do something to improve their economic condition. With no resources and support, she started with the skill she had – embroidery and needlework, which she had learnt from her grandmother growing up. “Neither did I have the money nor did my family, and even if they did, they wouldn’t have invested it in my work. After having managed with sewing and embroidering by hand for some time, the need for a machine became a must. I discussed it with a few women in the locality and we all decided to put in 100 Rupees each, and bought a secondhand sewing machine.”

From 2008 to now, a lot has changed and improved in Ruma Devi’s life, and in the lives of more than 22000 women in Barmer, for whom she is not just their leader, but someone they admire and look up to. Recalling the time when she had first spoken to her family about her desire to do something, she shared, “The questions were same as that faced by every woman – what will you do, where will you go – they were fine with anything as long as I was in the boundaries of home, and so that’s where I started from.”

With time, increased work and also the participation of more women from the neighbourhood, and that combined with her family’s inability to share her vision, led her to leave her house. But her honest intention and relentless efforts kept her moving forward. “Back then I couldn’t imagine the present day, I simply followed my heart and mind, and see where we are – I am back in the house,” she said smilingly. Now a mother of one, she doesn’t get as much time to spend with her seven-year-old son, but she does her best to manage all the ends and hopes to learn to find balance, “I can’t step back now when my community needs me the most. I’d love to spend more time with my son, but regardless I make sure that he gets the right upbringing, and grows into a good human being and man.”

The road to success is seldom straight forward, and difficulties have to be met with at every step of the way, and it was no different for Ruma Devi. “There was a time when the villagers would called me names and blamed me for influencing other women, but I knew better than to let that distract me.” And action indeed speaks louder than words for today the same people say yes to everything that “Ruma Devi Ji” has to say and take her word in favour of not only the women of Barmer but for the entire village. “Such is the power of honest work and dedication,” she adds.

But getting back to from where it all started, the magic of her sewing needle – how did she pick on the artform? “I learnt it from my dadi (grandmother). My mother passed away when I was very young, and my taai (paternal aunt) brought me up, I miss her dearly.” Speaking about her father, she said, “He was always supportive, but he was in the army and had many responsibilities, and I was married too early for us have had any time together.”

The mention of early marriage made her share with us another feather that she has added to her hat, and which is in the direction of discouraging the villagers to get their daughters married before 18. “Child marriage is still a commonly followed custom in villages. I recently got my sister out of such wedlock because the boy was not right, and having convinced the family, got her remarried.”

From making women-wear to bagging the opportunity of making bags for Gramin Vikas Evam Chetna Sansthan (GVCS), a prestigious NGO working with rural artisans in Barmer, to participating in fashion show as a lead designer, and winning participation for exhibitions abroad – Ruma Devi’s hard work and sacrifices have earned her a lot of acknowledgment and appreciation over the last decade.

“But the journey is long and lot more needs to be done, especially with regard to infrastructural facilities for the fellow women artisans. The space where we work is not enough for everyone to work at once. An inventory too is an immediate requirement, which would allow us to stock raw material to meet the orders in time. And also a vehicle is needed, to make it possible for women of nearby villages to travel to the center.”

Diligently working towards the larger goals and yet staying true to her roots, the GVCS community, under the leadership of their secretary Vikram Singh Ji and Ruma Devi Ji, has opened their first center in Jaipur, and to broaden the horizon for her fellow women artisans, she wishes to open a store too in the coming time!