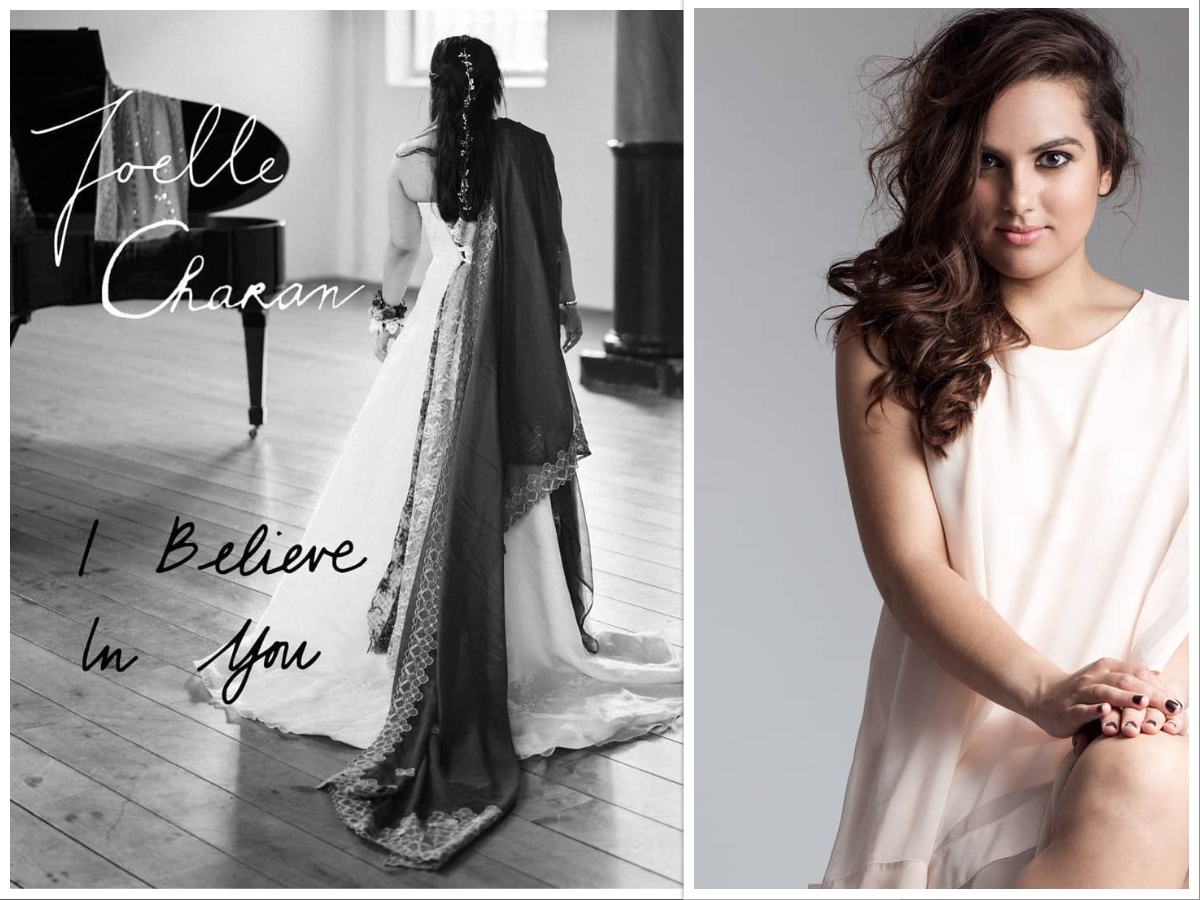 We often talk about the world becoming smaller. It is not only technology but also, the cross-culture of realities and geographies that have helped to shrink the globe. With people moving and settling in different parts, the cultural mosaic and landscape have spread its arm engulfing the entire world. The intermingling of different worlds gives birth to a vibrant and wonderful new dimension.

Joelle Charan, a young musician, explores this new facet through her love for music. Raised in Amsterdam to a Catholic mother and Hindu father, Joelle ‘celebrates her Hindustani roots in her identity and sound by infusing her dreamy pop songs with classical Indian instruments.’

Joelle’s father is a descendant of indentured laborers from northwest India who worked under the harsh conditions in Suriname. During her early childhood, she recalls being intimidated because she looked different. “I was raised in an open-minded home for which I’m ever so grateful. Yet I recall being bullied by my classmates who thought my skin had been painted on. They mocked me for not eating beef. As a child, I received an official letter in front of my mostly white peers which informed me of my allochtoon (ed.: the term used to describe the person of whom at least one of the parents is not born in the Netherlands) status due to my father having been born in Suriname, outside of the Netherlands. The Dutch government has since stopped using this term because it carries negative connotations of lower status, poor education, and involvement in crime, but its impact is still noticeable. The other children stared at me for days, it was weird. Back then I didn’t understand. I thought it was cruel and unfair to treat me differently, but now I know it was just the system.”

Yes, some systems in society have been questionable, however, there is always hope when these are systematically replaced by a sense of equality and inclusivity. Joelle Charan’s role in building bridges and fusing her heritage of ancient Indian instruments in sound and music are steps that work towards this precisely.

Joelle graduated from the Conservatory of Amsterdam and moved to New York to deepen her knowledge of songwriting. She had released her debut EP Silhouette in 2018. She has also performed extensively throughout the Netherlands and now brings her new single and the first release in the UK called ‘I Believe In You’. We caught up with Joelle to understand her rich heritage, her musical journey, and finding her true identity through music.

When did you first know that you wanted to pursue music? What drew you towards it?

Joelle: My parents had a piano when I was still in my mum’s belly. My dad used to play pieces by Chopin on it and that’s where my love for playing the piano comes from. When I was a baby, my mum recalls me recognizing the same melodies he’d play.

During lower school, I hated singing in the obligatory school choir and mimed instead. My favorite teacher noticed that; she told me I sang beautifully and that I should take up singing lessons. I took her advice and over the years singing became my passion.

Talk about your experiences with race as a person of mixed identity? How different is it now from those experiences in your early teenage years?

Joelle: On the one hand, I’ve noticed that public places around me have become much more multicultural. More children of color are now being placed together in schools with white kids, which I think is wonderful and so important.

On the other hand, in recent years I was held in custody at a US airport on the basis that I had a ‘different’ surname.

Even now I notice that interculturalism is too often focused on turning different cultural traditions into a ‘uniform picture’. We still label both people and music into categories.

How best would you describe your kind of music and what message do you wish to convey with it?

Joelle: My new EP, Ashira, is grounded in a message of forgiveness and empowerment against hate and injustice. Through the new collection of songs, I want to explore the inner depths of my memories and emotions, fusing ancient east and modern west in my sound to honor my own truth. Through the stories in my lyrics, I hope to offer a cleansing experience to those who listen, encouraging love and acceptance for oneself and others.

Ashira means “I will sing” and I sing for my family, my people, and myself. I no longer feel trapped by the injustices of my family’s past and I feel blessed by my heritage. I have reclaimed our family name Charan with its correct spelling after it was misspelled by a municipal officer when my family first arrived in Amsterdam from Paramaribo, Suriname. They had previously been indentured laborers working in unfair conditions in Suriname following the abolition of slavery. Reclaiming my name and integrating Indian elements into my music, I pay tribute to my roots and feel that I can look forward to dreams of the future.

We often hear that music has no boundaries or borders. But how easy or difficult is it, in reality, to incorporate musical elements from different geographic regions to create a composition?

Joelle: It’s surprisingly easy actually. I feel the colors and sound spectrum found in ancient Indian instruments fit very well in the sonic image of western modern music. Combined they make for something new and lovely.

What do you think we need to change in the way we perceive the world today to truly imbibe the spirit of movement ‘All Lives Matter’ to live the truth it propagates?

Joelle: We must all be given equal chances. We should never give a voice to extremism and hold back certain groups and individuals wanting to propagate prejudiced beliefs. No more cruelty and suffering inflicted upon people belonging to a ‘different’ group from those in positions of power and privilege. Even after Mahatma Gandhi, Martin Luther King, and Nelson Mandela, many aspects of society are still rooted in unfair, violent, and quick judgment.

We all have the right to be treated equally, regardless of our color, belief, gender, or sexual orientation.

“I Believe In You’ is your latest single. The inspiration for the song came when you saw a man reach out for the light at the edge of the sea. What was it about this incident that touched you the most and inspired you to write the song?

Joelle: The light that the man reached for came from a lighthouse I saw on a holiday in northwestern Scotland. I love lighthouses because they are always a comforting sight. They light up like a beacon of hope in the dark night and guide a ship lost at sea. This man looked lost, too.

One night I saw him standing at the edge of the sea, staring over the waves towards the lighthouse reflected in the bay. When the light came his way, he just reached for it. He seemed to be looking for something, trying to grasp its light in his fingers. I wondered who he was and what had happened to him to make him do what he did. I imagined him to be looking for a guiding light in his life, a sign to remind him that there is always hope. I wanted to write a song that encourages people and lets them know they are never alone.