“Are Women, Independent Of A Patriarchal Family, Not Citizens Of The Country?” Asks Manisha Gupte 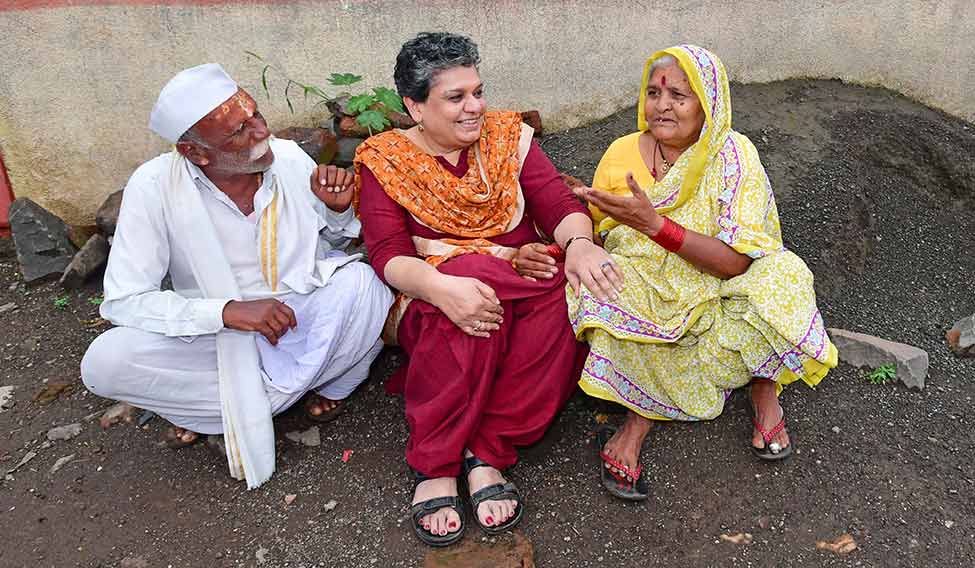 We all speak about how social change is important, how women need to be empowered, how health needs to be accessible to all strata of society, etc. Fortunately for the world, there are some people who are not thinkers alone. They are the doers; the action-oriented ones, who move out of plush air-conditioned discussion rooms, to actually bring about social change.

Manisha Gupte is an activist, Founder, and Co-Convener of Mahila Sarvangeen Utkarsh Mandal or MASUM. Educated in microbiology and sociology, she moved to Malshiras in the Pune district to start the organization along with her husband, Dr. Ramesh Awasthi. Today MASUM has grown with various programs that revolve around women empowerment, whether it be economic, social, political, personal health and much more. It has become a force to reckon with, engaging villages, women, and children at the grassroots level to help lay a foundation of a society that is free from violence and discrimination.

And yet, a positive social change is closely interlinked with political thought and policies. In times when political opinions are trying to divide the robust secular outlook of this nation, activists such as Manisha Gupte are making their stand quite clear. Protests are widespread across the country, with people from different palettes of society coming forward to express their anguish and anger against the controversial CAA, NRC and NPR debate. But the absurdity of the CAA finds further authentication when an activist like Manisha Gupte, whose sheer determination and social mindedness have helped elevate the lives of the marginalized, speaks out against it.

Not new, neither afraid to speaking out and questioning power that looks to trample on human and constitutional rights, Manisha Gupte’s tryst with social movements started back in 1975 during the Emergency in India. As a student she played an active part but how and why did she rebel against authority?

“I was a part of the movement because the very foundation of democracy had been challenged in our country at that time”, says Manisha. “Popularly known as the JP movement, it later got consolidated to ‘Chhatra Yuva Sangharsha Vahini’ – the movement of the students and the youth against all kinds of injustice. It was a shock when the emergency was imposed because in a democracy we had never seen this kind of a threat before. When the Nav Nirman Andolan dismantled the government in Gujarat and was gaining momentum in other parts of India, the Indira Gandhi government got insecure and started developing dictatorial tendencies. After the Allahabad court judgment and JP Narayan’s rally against Indira Gandhi, the emergency was imposed in the country. Indira called JP’s rally as an act of sedition and arrested many stalwarts. Along with the arrest of prominent personalities, entire colonies of poor people were also thrown out of their hutments. We were against all the atrocities that were happening with the poor people and the minorities.”

And so if we now draw a parallel with present-day India, how different is the fight against the CAA and the NRC?

“All those who were politically active during the emergency and fought against the government’s atrocities were called political prisoners if arrested. There were no criminal charges filed against them but now anyone who is arrested in a demonstration has serious criminal charges filed against them. Today there is no separation in the rights of a political prisoner and that of a criminal. When you go as a political prisoner, you go with a certain dignity that you haven’t committed any crime; you go in as a prisoner of conscience. The period of emergency and the implications it had on the entire country cannot be justified. When anybody’s rights are challenged, it hurts just the same. But, coming from someone who has actually challenged the emergency, the situation is much worse today. Indira Gandhi’s government had dictatorial tendencies but it wasn’t a fascist government. I think we must use the term ‘fascist’ very carefully. Congress had its root in the freedom struggle for a secular and democratic India whereas the RSS never participated in the freedom struggle. To them the British were not the enemy; the Muslims were the enemy. Today, there is a systematic dismantling of the values of the constitution and therefore, this time it is much more dangerous for anyone who believes in the Indian Constitution which is secular and believes in the equality and social justice”, says Manisha.

Manisha is a true feminist at heart. So we asked her why should the CAA and NRC be a feminist issue? In other words, how can these policies affect women the most?

“As a socialist-feminist, I definitely see this as patriarchal and affecting women from all sections of society. I believe that if any section gets affected, then the women in that section get affected more. Even without NRC and CAA, women are seen as an ‘appendix’ to the patriarchal family. For e.g., if a woman goes to take a loan, often the woman has to present a family sanctioned document if she has to keep the house as a mortgage. On the other hand, if a man decides to mortgage a house, there is no question asked whether the rest of the family agrees with it or not. The assets are usually on the name of the man and not the woman in a household; a woman is mostly considered as a child-bearer. So, we are talking about citizenship rights that are anyway denied to a woman in the private domain. And the public domain too accepts this like we saw in the above-mentioned example of a bank. A citizen is someone that the NRC will recognize based on certain papers. Women are anyway falling short of these papers because they don’t own assets in a patriarchal family. Imagine what will happen when they don’t have any papers to prove citizenship! Women have to understand that they are at tremendous risk. What happens to the citizenship of a woman whose husband throws her out of her house? Women’s mobility and all other rights get taken away in the name of safety and security. The constitutional rights listed in Article 14 and Article 19 are violated in such a scenario. The minority women bear the cost of majority fundamentalism as well as minority fundamentalism.”

It becomes clear that the CAA will cost women the most. And this can be understood by studying Assam’s case where several members of the same family were not listed in the NRC. What does Manisha have to say about the discrepancies that can cost women their place on the list?

“Women have to change families after marriage. Once they leave their mothers, their name changes, their family changes, their village/town/city changes. They become a part of a patriarchal family and sometimes get thrown out of those families due to domestic violence and other reasons. In such cases, their own families refuse to accept them. The husband often gets remarried. What happens to her? What happens to her children? How does a woman prove her citizenship without any assets to her name or without a family? How many times does she go to court? Look at the indignity. Even though the PWDVA of 2005 protects women from domestic violence and the courts can rule that the father cannot deny the responsibility of the children; all these finally go to prove a woman’s relationship with this country as a unit attached with a man. Are women, independent of a patriarchal family, not citizens of the country?”

And not only women but other communities, such as the trans community, are also threatened by the CAA and NRC. According to Manisha, “The citizenship of every other group has become a concern. It’s all about papers. My passport allows me to say that I am a transgender but it is no longer a proof of citizenship, it never was. Now, you have to present a number of papers. When the gender changes, imagine what will happen to all the documents. The moment you change your gender column whether male to female, female to male, etc., it’s not the same person anymore on the papers. Even though section 377 was struck out, same-sex marriage is still not legalized. We don’t know if the ration cards of same-sex partners will be considered valid. So, all these groups are going to be affected.”

Finally, the socially active Manisha’s parting thoughts were, “I have great faith in the people of India. The truth is on our side and truth shall prevail, there is no doubt about it. All those who are drunk on power and doing what they are doing will be remembered in history as ignominious people. We have to save the constitution of India. All of us have to understand that we are not islands but the part of the same structure. If one goes down, everyone goes down. Remember what Neimoller said, ‘…Then they came for the Jews, and I did not speak out because I was not a Jew. Then they came for me and there was no one left to speak for me.’ It is a difficult time and the future is looking bleak. But we will not be defeated, we are undaunted.”