April Phool’s Day: These Ladies Kickbox To Prove They Are Not Delicate Flowers 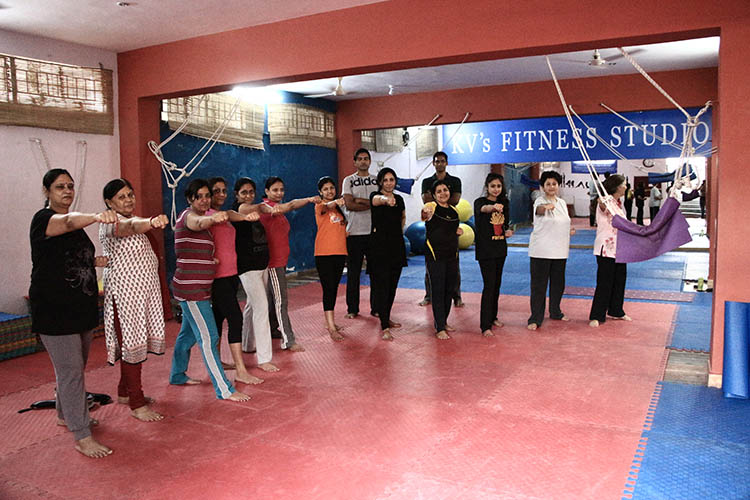 This April “Phool’s” Day JWB decided to punch the bullies in the face who think that men and women are different, and some “things” are just for the men.

Women have been fooled enough in the past by people who made them believe that they are weaker or inferior to the M-gender and thought them to be delicate as flowers (Phools).

Just to give a glimpse of the women power to the society, JWB will bring forth a series of posts showcasing women ruling the areas which were presumed to be the “only men’s things”.

We went to the city’s famous kickboxing institute, KV’s Fitness, where we met females of all ages, kickboxing their way out to fitness and more importantly, the gender bias.

We talked to the trainers Kapil and Vikram about the same.
Me: Tell us about KV’s Fitness and training women in kickboxing.

Kapil: We started five years ago. At that time, the ratio of men was more than the females. Gradually, the number of girls and ladies increased, and they started enjoying the kickboxing sessions. Now, the scenario is we have more women. Kickboxing is all about the stamina. And, regardless of the gender, one can have the same stamina if he/she trains regularly.

Me: Kickboxing undoubtedly ensures physical fitness. What other benefits do you see in women who kickbox?

Vikram: Kickboxing imparts a lot of physical strength which makes girls confident.  A lot of our female students come up to us and say that they are not afraid to stay out late or go to crowded places because they know they can handle molesters or punch and kick them as they say. *laughs*

Kapil: They get the sense of achievement and feel secure as they become self-dependent. We always train our students not to fear men or succumb to their so called “strength”. We always tell them that everything is in the mind. They have to believe that they are strong, and half training is done just there.

Later, we interacted with the ladies out there. We explained them about the April “Phool’s” Day, and it seemed as if I triggered their already surging emotions.

Me: Who all do you think fool you into believing that you are a woman, and so you can’t do this or that?

Shilpa Sharma: Actually, we are the culprits. Before joining here, I thought that I can’t do this. It’s a man’s thing. How can I punch or kick? So, we should change our mindset first. Now that I have been learning kickboxing, I realized I was wrong. Anyone can do it. So, it’s about pushing your limits and believing in yourself.

Pink Mundra: People perceive that women are bad at driving, or they are poor with accounts or calculations, etc. We are proving them all wrong and will continue to do so until they stop underestimating us.

Deepali Bansal shared with us a funny incident. She told,

“One day, my husband playfully fisted me on my arm. I returned his favor and punched him back. He was irked and said, “Oh My God! I am never touching you again if that’s how you will react. My god, you are strong.” I apologized, but believe me, I felt so good and confident.”

Then there was Mrs. Uday Mirdha, who had a different tale to tell.

Nancy Gupta told how her brother teased her when she joined kickboxing.

“When I joined last May, my brother said that I would not be able to do it. I was determined, and now I am one of the fittest and most agile students here. When my brother saw my kickboxing, he realized he was wrong, and appreciated me.”

Moral: Don’t ‘Phool’ yourself or be ‘Phooled’ by someone else. Know that you are not a delicate flower to be kept away in a glass vase in some corner. Know that you are strong and tough too. Understand, you are well suited for every job, every sport, every role, and everything else in the world.