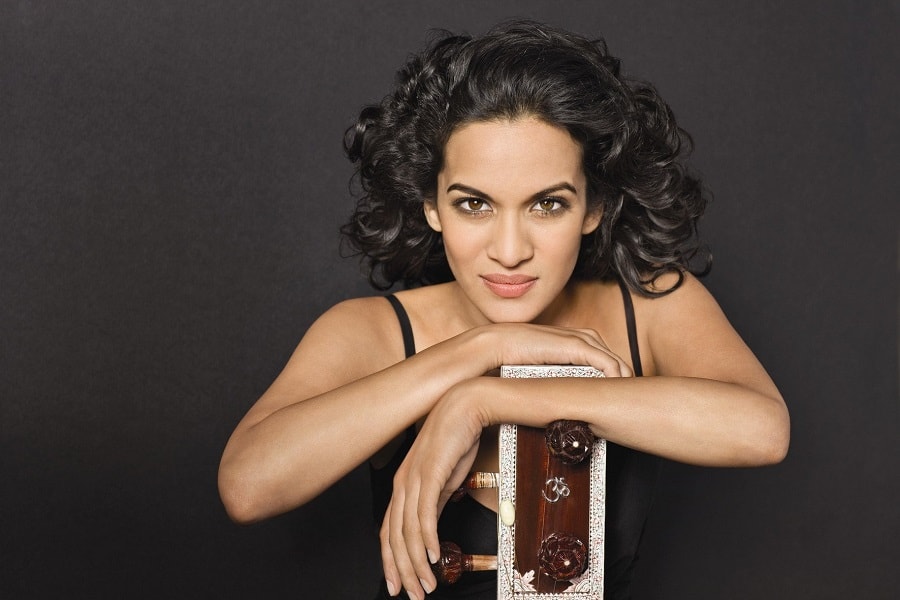 Anoushka Shankar is a huge name in the musical world. She doesn’t really need an introduction, her illustrious career and noted musical acumen make her a talent to reckon with. The daughter of the legendary Ravi Shankar, the Indian sitar player started training on the sitar with her father at the tender age of 7. Her first solo album ‘Anoushka’ was released in 1998, followed in 2000 by ‘Anourag’. Nominated for a number of Grammy awards, Anoushka became the youngest and first woman nominee for her third album ‘Live at Carnegie Hall’ in the World Music category.

One cannot help thinking of the lineage that Anoushka carries. Yet, she has successfully managed to emerge as a solo performer known for her refined sitar and musical rhythms. The influence of her father is present as she charters her own musical territories. And the newest addition is her brand new EP, ‘Love Letters’, which is a collection of songs written in collaboration with incredible female artists.  Why is ‘Love Letters’ any different? It is ‘on topics to do with various aspects of heartbreak and the female experience of relationships, marriage and motherhood’. Her recent divorce, being a single mother and medical conditions seem to have found expression in her latest EP, though the songs and music move beyond just mere biography. Also, Anoushka was back in India for her Love Letters India tour in February after a gap of more than two and a half years.

All of this as we talk to Anoushka on Love Letters, her bonding with female artists, performing in India, her father’s centenary celebrations, and much more.

You are back in India after a while. Tell us a bit about it and the connection you feel.

Anoushka: It’s been too long! It’s been the longest gap. It feels really weird to have been away so long, so it feels important to be coming back. It’s a homecoming, personally and musically, a return to roots and an offering to where it all began. India is one of the places I call home, and also where my roots are. I lived and went to school in Delhi for several years, and Delhi remained a base for me all through my teenage years and twenties. I also have a relationship with Kolkata and Chennai due to my Bengali and Tamil parents. Then, of course, Mumbai, where I have so many friends in the art world. Bangalore where I have family. Goa where I spent so many winters. I was excited to come back to Mumbai and Delhi, though I’m sad to be missing other cities I love; I’ll be back at the end of the year for the centenary celebrations.

Your latest album ‘Love Letters’ is in a way reflective of your personal struggles through the past few years. Tell us a bit about the emotions and sensibilities that went into its making.

Anoushka: ‘Love Letters’ is a collection of vocal songs featuring various wonderful singers including Ibeyi, Shilpa Rao, and Alev Lenz, and of course, my sitar as a central voice. The songs are deeply emotional and most are slow and quite intimate and raw, though a couple of songs move into a bit more anger and release. On ‘Love Letters’ I focused exclusively on songs with lyrics, creating a collection of songs that directly address heartbreak and it’s ensuing emotions in a way that instrumental music can only hint at. A lot of the songs on ‘Love Letters’ were written whilst my marriage ended. However, it is not all entirely biographical. It’s more that the process of a relationship ending inspired me to write some sad, introverted or contemplative songs, as is so common for musicians! I suppose it’s a different layer of personal for me to be sharing music that’s been influenced so directly from my own romantic experiences. I have written from a personal place before. And yet, this time, it just felt like, ‘No, these are huge, big, bright experiences,’ and I needed to dive into them musically as well. There is great strength in vulnerability, as it takes courage to push through the fear and share one’s true self with others. In music, that vulnerability really speaks to listeners as it connects with their own hearts. I find it increasingly easier as the years go by, to trust that I can be vulnerable in my music.

On one hand, you create music that aligns with your emotions and on the other, music influences personal emotions. So tell us a bit about the creative process and the music you love.

Anoushka: Strong emotions compel me to write music. Intense feelings need an outlet, and music is one of my strongest outlets. It’s a cathartic experience and can be healing. I’ve put up less of a barrier between my innermost feelings and the final product of the music this time. I think working on ‘Love Letters’ has helped me gain the confidence to be truly vulnerable in my music. There’s so many aspects to music-making. One side of it is very creative and soul-fulfilling and beautiful, and there’s a lot of it that’s also very pressured and quite overwhelming, very logistical, very business-related.

I just love music that is in some way transcendent or grounding. Music that takes me deep into myself and the emotional experiences of the world. It doesn’t matter what genre it is but if the music speaks to my soul, I’m hooked.

The album is almost exclusively an all women effort. It also says a lot about women standing up for each other.

Anoushka: Initially it was a natural process, writing songs with female musician friends I was spending time with, talking about experiences and a woman’s perspective on relationships, motherhood, and music. Later I began to seek this out more proactively, wanting the collection of songs to feel strongly feminine. Of course, there are some wonderful men involved in the project as well, namely my regular percussionist Pirashanna Thevarajah and a couple of brilliant engineers and mixing engineers. However, I wanted to include women on the technical side as well, and worked with female engineers and mastering engineers, and only had myself and my friend Alev Lenz as producers.

(Again) there were two sides to it. One was, in the aftermath of a breakup, it was a very raw time and I was naturally gravitating primarily towards my close female friendships. The women were the ones who really showed up in that way that carried me through. A lot of women will resonate with what I’m talking about – in those times of crisis, women show up. And that found its mirror in the music as well. My musician friends were coming over and offering that kind of musical solidarity, a space to write together, sing, put that pain somewhere private. But also, this is over the last two years, in the wake of Me Too and Times Up and Oscars So White, where we were all starting to look at the workplace as well. And I just started thinking, ‘Wow, I’ve been a kind of high-profile female in the music industry for 25 years now, but am I using that opportunity enough to bring other women with me through those doors that I am being allowed through? Can I now push through and bring other women?’ So I was thinking, ‘God, I need to be more actively working with more female co-writers, female producers, female engineers…’ So there was an active element of seeking that out as well.

Anoushka: Women sadly do not have an equal playing field in life overall, so the music industry is no different. It’s not about the odd artist having success and using that to prove women are present and visible. It’s about systematic change across all levels of the industry and having more women in positions of power to make decisions that trickle down across all areas of music. I think it’s (gender equality) being fought for, by tooth and nail. Firstly, on a musical level and also on another level, where in the last few years we’ve all been speaking so much about representation in different fields of work and whether women are getting enough opportunities in all areas. I realised how rarely women are involved in all aspects of the music-making, how rarely I’ve worked with female engineers. And it has been really lovely to take an active part in opening the door in that way.

Dear friends, I’m so happy to share a new song with you, OUT TODAY! ‘Those Words’ features the amazing women Ayanna Witter Johnson and Shilpa Rao on cello and vocals respectively. I’m very attached to this sweet, evocative song and hope you like it too. I’m so grateful to each of the women who helped to birth it: along with Ayanna and Shilpa were my co-producer Alev Lenz, lyricist Shirin Anandita, engineer Izziiee Jewell, mastering engineer Heba Kadry and the beautiful painter Azeema Nur, who once again has created such beautiful art work for my song.. I didn’t quite manage an all female cast 🙂 and need to thank my dear Matt Robertson for his stellar mixing as always! Have a listen and let me know what this song makes you think and feel. I’d love to know! Link in bio @izziieejewell // @ayannawj // @alev_lenz // @azeema.nur // @shilparao // @shirinanandita // @heba_kadry Out now on @mercurykx

3,738 Likes, 52 Comments – Anoushka Shankar (@anoushkashankarofficial) on Instagram: “Dear friends, I’m so happy to share a new song with you, OUT TODAY! ‘Those Words’ features the…”

How do you remember your father as the year 2020 marks his birth centenary? What are the plans for the centenary celebrations?

Anoushka: It feels very poignant to be planning these special centenary celebrations. We are doing special concerts and events around the world, beginning in London on what would’ve been my dad’s actual birthday with a gala concert featuring many of my father’s senior disciples. This will also be the very first time my sister Norah Jones and I perform together onstage. We tour America with further concerts featuring special guests such as Philip Glass and Dhani Harrison. Ultimately, we will conclude the celebrations with special performances in India featuring special guests and many of my father’s incredible disciples.

A hundredth birthday is something unique and special. At the time of my father’s passing, my mother and I were more focused on our personal process of grieving and therefore did not arrange any big concerts for him. We knew from then that we would mark this centenary in a way that befits the legendary musician he was. It’s impossible for me to encapsulate my experiences with him into a few sentences. But as a dad what I remember most about him is his sweet, loving nature and joyous, childlike humour. His example was more important than his words. He always practiced intensely before concerts and took the time to really focus and centre himself before going onstage. Every single show was important, after decades of performing and thousands of shows. He was never casual about a smaller city, for example. That commitment and discipline were amazing.