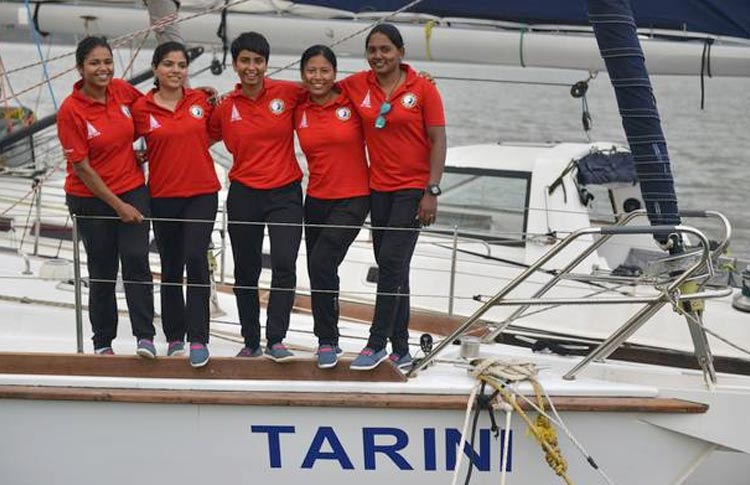 Just a few days back when the Indian Navy inducted its second sailboat ‘Tarini,’ we glued our eyes to see them set off and wave goodbye. But little did we know that before the first Indian all-women global circumnavigation leaves, we will get a chance to sail with them.

On the eve of International Women’s Day, yesterday, SHM Shipcare felicitated three officers Lt. Commander Vartika Joshi & Lt. Aishwarya Boddapati. Despite being miles away, we could connect with them through Facebook Live!

“How is the life different on an all women ship as compared to an all men ship?” we asked through the moderator of the session.

“Well, the routine life on the all-male ship is very similar to one on an all-women ship.  So on the professional front, how we live on the ship depends on a lot of factors, the major being weather. So if the breeze is favorable and we have a smooth sail, we six officers divide our watch system in a pair of three. Two officers then sit on the deck on a look out for any traffic, other vessels or any other dangers. They also have to take care of the equipment on board. This is our normal routine.

And when these two officers are on a watch, the rest do whatever they want to!”

“It ranges from cooking and knitting. Like one of us knits amazing sweaters for infants. We also do painting, sketching, write poetry and yes we at times do nail art too.”

“This is the best part of a smooth sail because if the water is calm, we get to do whatever in the world we want to. Thus sailing never feels like a job because we have the freedom to pursue our hobbies and do things we like.

Lt. Aishwarya interrupted her senior and said, “So we have also started observing the stars and the constellations. That’s probably because we are generally sailing in the southern ocean and the stars there look very different from what we get to see in our cities. Since ours is a sailboat that does not run on the engine, we also observe a lot of sea creatures, which is why a lot of birds and fishes come on board. There are also dolphins that race with us and they always win!

The sea never fails to surprise us. In fact, we once saw thousands of dolphins jumping throughout the horizon.”

While discussing their ‘Life of Pi’ moment, Lt. Commander Vartika Joshi shared, “It once happened when we were going to Cape Town that we were cutting really short on our food. In the last week, we were only left with rice and maggi. So we kept experimenting with rice in all the three meals we had the entire day. Also, we have a limited capacity of carrying fresh water with us. Though we have a sea water-salt water conversion unit on the boat, it’s not much of help. So there have been times when we mix some juice powders and tang in sea water and drink.”

You can watch the complete interview here.